This week on The Good Doctor, Shaun and Glassman deal with new relationship crises, while Claire tries to bury her feelings about Breeze’s death.

We begin Episode 4 at Carly’s apartment. Shaun and Carly share a kiss, then Carly tries to hold Shaun’s hand, but he pulls away. The following day, Shaun and Park head down to pathology to get test results for their patient — a ridiculous Alex Jones archetype played by Scandal vet Josh Malina — and Carly makes a second attempt to hold her boyfriend’s hand. This time, Shaun pulls away even faster, then makes a beeline for the door and goes to discuss the matter with Glassman.

When Shaun arrives at the clinic, Glassman makes an announcement: He and Debbie have decided to go down to City Hall and get married. Shaun offers his congratulations (that is, after Glassman tells him that it’s common courtesy), then immediately moves on to the reason for his visit. Glassman encourages Shaun to explain to Carly that hand-holding makes him uncomfortable, but Shaun doesn’t see why it’s necessary. After all, he and Carly are compatible on so many big things, including children, geographic preferences and color schemes for their future home. (Suffice it to say, Shaun learned a lot when he presented Carly with 83 questions last week!)

Glassman is taken aback by Shaun’s checklist, but his mentee thinks it’s rather insignificant. “Carly and I are still getting to know each other,” he says. “It’s not like you and Debbie. You already know these things or you wouldn’t be getting married.” Except Glassman doesn’t already know these things about Debbie, and he suddenly looks petrified about getting hitched. We check in with the soon-to-be marrieds as they wait for their number to be called at City Hall, and Glassman is on edge. When he discovers that there’s even more he doesn’t know about Debbie (in this case, that she served in the U.S. Merchant Marine), he panics and walks out on her.

Debbie finds her fiancé at the clinic, where he apologizes for humiliating her. He insists that he got cold feet when he realized just how little they know about each other, but Debbie isn’t convinced. If that was Glassman’s chief concern, he wouldn’t have proposed to her after just two dates. During the ensuing conversation, and a subsequent discussion with Shaun, Glassman’s true fear becomes known: He is worried that he’ll screw up his second marriage even faster than his first. He eventually overcomes that fear and takes a leap of faith — both literally and figuratively. He invites Debbie into his office, where he jumps up and down on a trampoline to symbolize his willingness to take a leap and tie the knot.

As for Shaun, he and Carly reconvene at her apartment, where he tells her that he doesn’t like holding hands. “Either we hold hands or we don’t. There’s no compromise,” he tells her. “Only one of us can get what we want, and it should be me. Holding hands makes me uncomfortable; not holding hands doesn’t make you uncomfortable.” But it does make her uncomfortable. “[Holding hands] means we’re in this together,” Carly explains. It means that “we’ve got each other’s back, and we’ll hold each other up for as long as we can.” Shaun argues that he can say all of those things verbally, but Carly insists that there’s more to it than that. “You can shout them, and it wouldn’t say it as loud as this.” Shaun takes her hand and makes an effort to be comfortable with it, but quickly pulls away again. She’s tells him it’s alright, but the look on her face says otherwise. The following day, Park offers Shaun his two cents. “She wants it, she’s just given up,” he says. He explains to Shaun that it’s not a good thing if Carly has given up on holding hands, especially if it’s something that’ll bug her for the rest of their relationship — which may not be for very long, he warns. 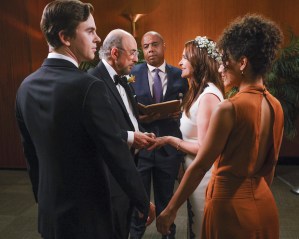 Later that night, Shaun and Carly accompany Glassman and Debbie to City Hall to stand by them when they get married. When Glassman kisses his bride, Shaun looks over to Carly and gestures to hold her hand… only that’s not what happens. Their arms touch, but their hands never quite meet. A compromise has been reached.

Claire, meanwhile, has yet to inform any of her friends or colleagues about Breeze’s death. She becomes envious of her patient, Lily, a woman who is unable to feel pain. Morgan senses that Claire is hiding something and follows her out to the parking garage. There, she rummages through her coworker’s trunk and finds an urn with Breeze’s ashes. When Morgan asks Claire what Breeze would have wanted her to do with them, Claire says that she wanted them scattered at the local marine science center. And so, later that night, the ladies get dolled up and crash a drag pride party being held at the museum. 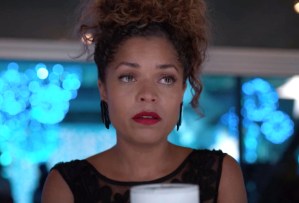 Morgan and Claire head out to the balcony and Claire prepares to scatter Breeze’s ashes in the sea lion colony. (Is that… even allowed?) Morgan stops her and asks if she has a prayer she’d like to recite. Claire claims that neither she nor Breeze were religious, but Morgan argues that everyone has a religion, and Breeze’s religion was music. So instead of a prayer, Claire sings a hymn: “Amazing Grace.” Her eyes well up as she makes her way through the song — and dang, Antonia Thomas can sing!

Afterwards, Claire and Morgan catch the bus and head to their respective homes. After she changes out of her dress, Claire heads back out to a bar and starts drinking. There, she’s approached by a man who offers to buy her a drink, which she accepts. We then cut to Claire and this random dude hooking up in an alleyway. Is this her way of coping with Breeze’s death, or a sign that she’s about to follow in her mother’s destructive footsteps? Hmm…

What did you think of The Good Doctor Season 3, Episode 4? Hit the comments with your reactions.