The Good Doctor went full-on CSI: Cyber this week — and you probably have some thoughts.

In addition to the cyberattack, Monday’s Freddie Highmore-directed episode saw the departure of one of the newbies (no real surprise, given where her story left off four weeks ago) and the salvation of a fan-favorite friendship.

Before you hit the comments and try to make sense of St. Bonaventure’s cybersecurity system, let’s briefly recap what happened in “Decrypt”:

When the hospital was hit with a cyberattack, IT expert Lea sought to outsmart the hackers and prove herself to Glassman. After the dark-web terrorists caught wind of the hospital’s measly ransom offer (negotiated by Masters of Sex and Trial & Error alum Nicholas D’Agosto), they sent Lea a “signal text” — whatever that means. They doubled the ransom to $4 million and activated malware. “If we don’t pay, they’re going to delete our data and destroy all of our MRI, CT and x-ray machines,” Lea explained. Eh, just go with it. 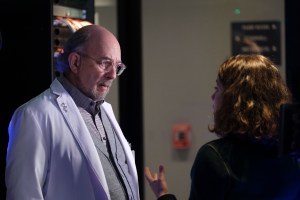 Shaun’s girlfriend had just 24 hours to retrace the attack chain and retrieve the hospital’s data — “otherwise, we might as well toss every computer we have in the recycle bin,” she said. She pulled an all-nighter, performed high-risk server surgery (or something), and saved the day — just seconds before Glassman authorized the bitcoin transfer. In return, Shaun’s father figure thanked Lea for her hard work and invited her to his weekly poker game. (I would’ve offered her a raise, but that’s just me.)

As the clock was ticking, Lea received some much-needed assurance from Shaun. She was 95-percent certain that she could defeat the hackers, but the off chance of failure made her extremely nervous. In an effort to relate to her predicament, Dr. Murphy explained that he’s never certain that a surgical procedure is going to go according to plan; there’s always a chance something can go wrong, and that has to be OK.

As for Shaun, he worked alongside Claire and Olivia on an inspirational cancer survivor-turned-philanthropist who harbored a dark secret: He didn’t actually lose his leg to cancer — he was a fraud. He lost the limb in a freak motorcycle accident when he was 22 years old, but kept the lie going to inspire others, help those in need and (ugh) profit off of his philanthropy. When the truth was leaked to the press, Lim assumed it was Claire’s doing and pulled her from the case, only for Olivia to come forward and get herself fired. But as it turned on, Olivia wasn’t the whistleblower. She just wanted out of her residency. 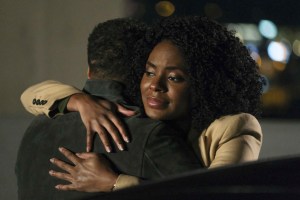 In the parking lot, Olivia explained to Andrews that she never wanted to become a doctor, but everyone in her life, including her uncle, was just so gosh-darn persistent. At last, Olivia got through to him. Andrews meanwhile copped to being the whistleblower! He knew the patient was a fraud, but didn’t expect Lim to blame Claire. And he certainly didn’t expect it’d lead to his niece’s dismissal.

As for Lim: The chief of surgery made her way over to Claire’s apartment with a pint of salted caramel ice cream to apologize for her recent behavior. Claire accepted the peace offering and let her in. Friendship restored!

And lest we forget about the other Case of the Week… With the help of Park, Jordan and Asher, Morgan successfully orchestrated a multi-organ chain transplant and saved end-stage liver disease patient Jamie’s life.

OK, now it’s your turn: What did you think of The Good Doctor Season 4, Episode 10? Drop a comment with your full review.