This week’s episode of Men in Kilts is officially titled “Witchcraft & Superstition” but should actually be called “All the Ways Sam Tries to Give Graham a Heart Attack.”

The installment focuses on all the ways Scots are obsessed with everything otherworldly. After all, as Sam voiceovers near the top of the ep, you can’t throw a stale bannock in Scotland without hitting a cemetery, castle or some sort of ancient ruins, “and the barrier between the world of the living and the world of the dead is especially thin.” Like Midnight, Texas, but plaid! And no weretigers… I think.

In the camper van, the guys talk about the superstitions they entertain. Sam says he wears a new pair of socks whenever he runs a marathon. “That’s not superstition, that’s just hygiene,” Graham curmudgeons. Then he makes a simple request: “I don’t want this episode to be one near-heart attack after another for me, if that’s OK.” Sam nods… and then promptly ignores his friend’s wish.

Their first stop is Greyfriars Kirkyard in Edinburgh, where a “historian of death” named Charlotte Gollege walks the guys through the church’s notoriously haunted yard, parts of which once served as a prison. When Sam asks if they can go inside, Charlotte (a little too excitedly, in my opinion) asks, “Are you going to get naked in the prison?” I pray that it’s the editing that makes her question sound so weird, and that she wasn’t actually teen-girl-tee-heeing while making a reference to the Season 1 Outlander episode in which Heughan’s Jamie was raped. Heughan seems mildly taken aback for a moment, then laughs it off. His being nude behind bars “did happen in Outlander,” he concedes, and they move on.

Charlotte tells them a story that is supposed to be scary. But they’re standing out there in the light of day, so it all falls flat. Essentially, someone allegedly broke into the kirkyard and released an eternal evil into the world. “And for some reason, it has taken its leave in the covenanters prison,” she intones, ushering Sam and Graham into a dark enclosure — and then locking the door behind them! Then she passes them some photos of bites, burns and other maltreatment that has befallen people who’ve encountered the terrible presence that haunts the “black mausoleum” in which they’re now being held captive. And then…. nothing happens. Time to move on! 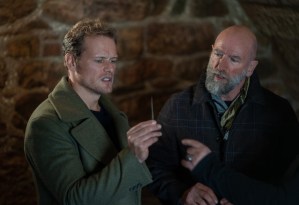 Next, we head to Wormiston Castle in Crail, where a witch expert named Leonard Low fills the guys in on exactly how bad it was to be considered a witch in Ye Olde Scotland. There are thumbscrews, pokers and other instruments of torture, as well as multiple callbacks to when Claire and Geillis Duncan were put on trial for witchcraft in Outlander. And when Leonard has Graham reenact how jailers would push a small bowl of food into the cell to feed the captured witches, someone unseen on the other side of the window grabs it, scaring the bejesus out of poor Graham.

Eventually, Graham and Sam wind up at the Isle of Lewis in the Outer Hebrides, home to the stone circle on which the one you’ve seen in Outlander was based. Production even took casts of some of the individual stones; the scenes, however, were shot in a studio. “This is the Stonehenge of the north,” Graham announces, musing about possible reasons why circles like these were built way way way back when. “Sometimes it’s good to have mystery in life, don’t you think?” he wonders. Then Sam makes a huge show out of touching the stone like Claire does when she gets tossed back in time in Outlander. “I’m going to break it to you gently: It’s not going to work,” Graham deadpans.

A recreation of Beltane (which happens to fall around both Sam’s birthday, April 30, and Outlander‘s Jamie Fraser’s birthday, May 1) is our final stop. The celebration of fertility is “when everything comes to full-blown life,” a woman in a flower crown and face paint informs the men. Then the drums start up, stuff gets set on fire, and the guys get their groove on in passionate, if not entirely serious, fashion. Eventually, someone presents them with headdresses made of bone and plants, and they scream as the beat drops on some sweet bagpipe rave music.

Eventually, Sam’s shirt is off, he’s dousing himself with a bottle of water as he shakes his groove thing, and I’d say we’re about done here, aye?