Mr. Wednesday has nothing to fear but spear itself.

Because at the end of Sunday’s American Gods, Laura Moon has gotten hold of Gugnir, the legendary weapon belonging to Odin, aka Mr. Wednesday. And as she triumphantly announces to her new leprechaun pal Liam Doyle, she knows exactly what she’s going to do with it: “I’m gonna kill Wednesday.”

“She’s stoked,” says Emily Browning, who plays Shadow Moon’s vengeance-fueled ex.  “It’s right back to the beginning of that energy of when she pulls Shadow down from the tree in Episode 4 of Season 1. She’s just like, ‘Cool. I’m back to this place where I can’t be f–ked with, and I’m feeling pretty good about that.” She laughs. “At the end of Episode 8, she’s just like, ‘I’m back, baby!'”

In a moment, we’ll hear more from Browning about Laura’s killer plan (and the odds of it working out). But first, let’s talk about what happened in the rest of the episode.

* Dr. Tyrell knocked Shadow out and brought him to The Wolf’s Den, then summoned Wednesday to meet him there and battle it out. “We settle this the old way,” Wednesday said, opening a realm in which the two men — dressed in their Original God wear — engaged in hand-to-hand combat while Shadow watched. Eventually, Shadow jumped in to help his old man. And that’s when Wednesday used the distraction to shove a sword through Tyr’s torso, killing him.

* Laura and Salim traveled to find Liam Doyle (played by Game of Thrones‘ Iwan Rheon), a leprechaun who was to help her recover Odin’s spear. But when she located him — working as a down-on-his-luck (literally!) bartender at a deity-protected hotel — he refused to help her unless she gave him Mad Sweeney’s coin. She said no… then she said changed her mind, and he disappeared into Sweeney’s horde. For a really long time. 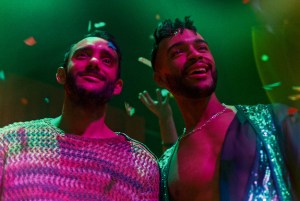 * Salim got his groove back, physically and spiritually, courtesy of a friendly bellhop at Liam’s hotel. Then, having let go of Jinn and bid Laura farewell for now, Salim reconnected with his religion and began praying again.

* Laura made her peace with the fact that she was probably going to die at Mr. World’s hand, so she tearfully sprinkled Sweeney’s ashes in a river — and then Liam showed up with the weapon!

So that’s where TVLine started when we spoke to Browning this week.

TVLINE| How do you think Laura’s feeling as she walks away with that spear? She seems really confident, but can that confidence get her through killing a god?
I’ve been playing her for a lot of years — I mean, it’s four years now — so I really empathize with her and love her and see her soft spots. But it’s always interesting to talk about, because I don’t want to ever be like, “Wait, I can justify all of her bad behavior!,” you know?

But I definitely think that she is one of those people who is deeply, innately insecure. And she’s pushed herself so far away from it for so long that it almost doesn’t exist. It just has become this like rotten thing inside of her that makes her act out. Like, I don’t think she sees herself as fragile or insecure in any way whatsoever. Episode 8 is the first time you actually really see her like [that, because] Sweeney dies and she’s like, “F—k.” Not even to speak of the feelings she may or may not have for him, but that’s her ticket into this world that Shadow is now in, this afterlife world that is her only world at this point.

She doesn’t understand it. She doesn’t know how to operate in it without Sweeney… And I think the moment that Liam seems to not be coming back from the horde it’s like, “OK, I’m screwed for the first time. I’m actually, literally screwed and there’s nothing I can do. And oh no, I really care about this friend that I’ve made, Salim, and I don’t want to drag him down with me. It’s this moment of reckoning to her.

And then, in a way I find kind of great and annoying and hilarious, before she’s fully able to reckon with the idea that she’s just for good, Liam comes back with the spear and she’s like, “Actually, I’m fine! Everything is great!” [Laughs] She’s like, okay, it all worked out in the end, but I don’t really need to look at my behavior too much, it’s all going to be good.” 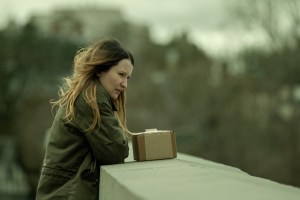 TVLINE | In my head, I knew Laura was human again. But when she picked up the spear and it was heavy, I realized: Oh wait, she’s not going to have superhuman strength when she goes up against Wednesday. And she’s a small person wielding a very heavy weapon. How is that going to work?!
[Laughs] Yeah. And that was actually a really difficult scene. I think the first Laura-and-Liam scene that we shot was scene where he appears by the river with the spear. I felt like a child actor or like a dog or something that wasn’t getting the note of like, “No, this is heavy now.”

I was so used to just operating in this world as Laura, lifting up trucks… It was actually a real challenge for me, as her, to struggle with something physically… And I think it’s something that’s a nuisance for her, but she’s not fully acknowledging it yet until probably Episode 9.

TVLINE | Let’s say the best possible outcome (for Laura) happens, and she’s able to kill Wednesday. Do you think what she’s experienced this season — Purgatory, especially — affects how she might look at her life after?
In a way, what Purgatory gave to her was like just a little bit of an understanding that there actually is a reason for who she is, you know? … I don’t think she necessarily is any less impulsive and like stubborn. In her mind, she’s like, “I’m going to kill Wednesday, and I’m going to kill Wednesday. And that’s all I’ve got, and I don’t know what the hell is going to happen after that.” [Laughs]