This week’s American Gods rewound the events of the series (and beyond), taking us all the way back to Laura’s life before Shadow. We learned that the future Mrs. Moon was a bored/possibly suicidal dealer at a casino named Anubis, and she met her husband when he caught him as he tried to cheat at her table. 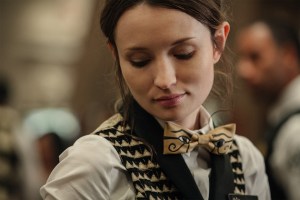 The episode takes us through their courtship and eventual marriage, then illuminates how Laura quickly tired of the banality of domestic life. To combat her ennui, she urged Shadow to help her rob her casino. “You will never get caught,” she promised. As anyone who’s been watching since the beginning of the series knows, that proved false.

While Shadow did his time, his best friend Robbie made a move on Laura… and she didn’t turn him away. Robbie’s wife Audrey wasn’t lying at the funeral: Right after Laura spoke to Shadow ahead of his release (aka the scene we saw in the season premiere), she broke things off with Robbie — but decided to give him a special, lap-located goodbye while he was driving. That’s when (and why) he crashed, killing them both.

Laura eventually finds herself in the desert with Anubis, who wants to weigh her heart on his scales like he did in the “Coming to America” segment — but she refuses. “I lived my life, good and bad,” she explains unrepentantly. “Definitely not good as a feather.” And while they’re arguing about her soul’s fate, she’s unexpectedly flung backward and far away… 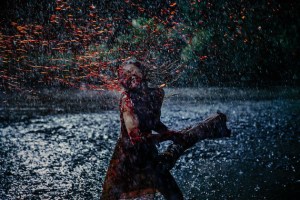 … until she crawls out of her grave, reanimated by the coin shadow tossed into the dirt hours before. Confused, she walks toward a strobing yellow light in the distance. Turns out, the glow is coming from Shadow, who’s just been strung up by Technical Boy’s goons; we’re seeing the events of Episode 1 from Laura’s perspective now. She steps in and handily destroys all of the baddies, though her strength seems to come as a surprise, and tears the rope so Shadow will live. One of her arms falls off in the process. It’s funny. (No, really!)

She later tries to sew on the appendage in Audrey’s craft room. When Robbie’s widow comes upon her dead former best friend tooling around in her house, she freaks out… then lays into Laura for being an unfaithful jerk. (By the way, most of this conversation happens while Laura is sitting on a toilet, because embalming fluid is “coming out of every hole I’ve got, and it’s very disgusting,” she explains.)

Audrey eventually acquiesces and reattaches Laura’s arm to her shoulder. Later, Laura makes the acquaintance of two men who run a funeral home — one is Mr. Jaquel, aka Anubis, the god whom Laura irked in the pre-afterlife. The other is Mr. Ibis, whom we saw writing the “Coming to America” interlude in the beginning of the series. They have a funeral home, and they patch and paint Laura up until she looks normal again. At the very end of the hour, we see her in Shadow’s hotel room, bringing us full circle to the final moments of the previous episode.

TVLine spoke with Emily Browning, who plays Laura, to get the scoop on her character’s revealing backstory (and to give her serious props for her commitment to that bathroom scene). Read on for Browning’s thoughts, in her own words, on:

BOOK LAURA VS. SHOW LAURA | “She only really exists in the book in relation to Shadow. That was one of the first things I talked about with [series co-creators] Michael [Green] and Bryan [Fuller]. They obviously wanted her to be her own person and expand upon all of the female characters, which is important. I think if they didn’t do that it would be a real detriment to the show.”

LAURA’S ATTEMPT TO GIT GONE | “Even when we shot [the scene where Laura shuts herself in an enclosed hot tub with bug spray], the director and I were talking about it and we weren’t even entirely sure whether she was trying to kill herself or whether she was trying to get high but didn’t really care if she killed herself. We haven’t even figured that out yet. In my mind, it was sort of both. It was like, “I want to feel something, even if it’s the last thing I feel…” She doesn’t understand other people’s feelings, she doesn’t have any self-awareness, and she doesn’t really understand what is going on around her. I think it’s cool to see a character like that who also has a lot of agency and a lot of power. She’s not just kind of like ‘Oh, I’m confused.'” 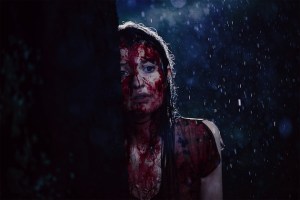 THAT SCENE IN THE BATHROOM | “I thought it was hilarious… That was one thing with Laura from the beginning that I talked about with Bryan and Michael: I want her to be gross. She’s gross. I’ve never really gotten to do that before. [Laughs]

This was [the only] job that I did where never was there any mention of, “You have to look cute and you have to look pretty.” The only time we went for that angle was in the first two episodes, when Laura only shows up in dreams and fantasy, because we thought it was a cool idea if when you first meet her she’s Shadow’s idealized version. I mean for the first three weeks, people who haven’t read anything about it and don’t know the book will [think] she’s just his sweet, doting wife. But it’s entirely his version of her. Then you meet Laura, and she’s so clearly not… She’s messed up and she has a lot of issues, but her self-esteem is pretty good. She has a lot of arrogance, which is really fun. I feel like so often you’re playing apologetic women, and she’s just not.”

LAURA AS SOMEONE TO FEAR | “To be honest, I think if I met Laura on the street, I would be afraid of her regardless. She’s kind of terrifying, but I think that definitely helps. A lot of the big dudes in the show are kind of scared of her the whole way through, which I’m into.” [Laughs]