That’s not some euphemism: It seems as though the ex-con who’s recently spent some time with some very odd people may have a touch of the weird about him, as well.

The Starz series’ third episode is when I started to really fall in love with the show. That happened for two reasons. First, this hour is the one where Mr. Wednesday and Shadow really start to gel, especially as comedic partners, and Ian McShane and Ricky Whittle just look like they’re having so much fun together. And second, the episode pays as much care and respect (and gives equally stunning visual treatment) to a brief vignette about a gay American immigrant’s rendezvous with a supernatural creature as it does the hour’s main plot. The result is stunning.

Read on as we go over the major developments that take place in “Head Full of Snow.”

‘THIS IS NOT QUEENS’ | The aforementioned “Coming to America” chapter is actually the second one in the episode; the first concerns an old woman who dies and then is surprised to find the Egyptian god Anubis at her door, ready to escort her to the afterlife. They climb out her window and up a seemingly never-ending fire escape, then wind up in a desert under a crazy beautiful sky. “This is not Queens,” the old woman says, looking around with wide eyes. “This is not Queens,” Anubis replies. (Ha!)

He reaches into her chest and pulls out her heart, then weighs it against a feather on a balance. “I tried my best,” she says, slightly nervous. “Your best is good,” he reassures her. He then instructs her to choose from one of four doors that appear before her. She steps into one, hesitates, and then a cat that’s been slinking around nudges her fully through the doorway. Rest in peace, wherever you wind up, ma’am! 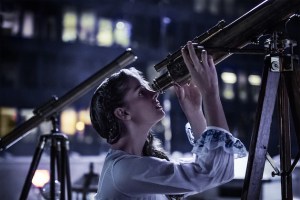 MOON SHOT | Back to Chicago, a doomed Shadow is trying to sleep in the front room of the Zorya sisters’ apartment in the middle of the night. But he eventually climbs out the window and up to the roof, where Zorya Polunochnaya — the sister who was sleeping last episode — is studying the night sky through a telescope.

She’s a cute, weird young thing who explains to Shadow that she and her sisters monitor the stars at all hours of the day. “It is a bad thing chained up in those stars,” she says, adding that the Zorya siblings make sure it doesn’t escape.

During Shadow’s strange roof date with the trippy astronomer, he kisses her — her first — at her request (her review: “Kissing is disgusting, but in a nice way, like blue cheese or brandy.”) and she literally plucks the full moon from the heavens and hands it to him as a talisman against harm. Like, say, a surly Russian who’s overly fond of his sledgehammer?

“Don’t lose this or give it away. You had protection once. You had the sun itself,” she says, referring to Mad Sweeney’s coin. “I can give you the moon. It’s the daughter, not the father. Now, you wake up.”

And so Shadow does, in the morning, on the Zoryas’ couch. Only when he looks at the window he used to get up to the roof, there’s no fire escape or any other means of getting to the roof from inside. Yet he still has that silver coin in his pocket. Hmm…

WINDY CITY WRAP-UP | A quick highlight reel of the other important stuff that happens in Chicago:

* Zorya Vechernyaya (aka the really old one) seems to know what Wednesday is up to with this whole road trip, and she does not think it’s a good idea. “This thing you want to do, you will fail. And they will win,” she warns him, but Wednesday laughs it off. “They will kill you this time,” she reiterates as they go for a walk. But Wednesday doesn’t seem terribly bothered by this, either. Instead, he kisses her and notes that war is in the air.

* Feeling lucky, Shadow asks Czernobog for a rematch. If Shadow loses, Czernobog gets two chances to kill the ex-con. If Shadow wins, the King of the Dirty Undershirts will agree to join them on their road trip, but he still gets a shot at sledgehammering the life outta Shadow later on. In the end, Czernobog winds up joining them on the trip.

* After a bank robbery con that’s so smooth, no one even realizes they’re being bilked out of lots of cash, Shadow reluctantly agrees to acknowledge that Wednesday may know what he’s doing. (That might have something to do with the fact that at one point, Wednesday tells Shadow to think hard about snow… and then it starts to snow. Spooky.)

* This quote seems important, so I’m going to put it right here: “Belief is a product of the company we keep and how easily we scare,” Mr. Wednesday tells his bodyguard. “The only thing that scares me is being forgotten. I can survive most things, but not that.”

IN WHICH I DO NOT MAKE A ‘RUB MY LAMP’ JOKE | Let’s leave Shadow there for a moment and go to that second “Coming to America” bit, in which a young salesman from Oman has a terrible time in America until he happens to hop into a cab driven by a down-on-his-luck jinn (or, as we Aladdin fans might call him, a genie).

Once it’s clear that the passenger knows what the driver really is, the cabbie starts to grouse about his lot in life. “They know nothing about my people here. They think all we do is grant wishes,” the jinn says. (Side note: Sorry about that Aladdin comment, guy.) The passenger, Salim, is sympathetic and touches the man’s shoulder in comfort AND THERE ARE SPARKS. Not literal ones — though that wouldn’t be too far afield, given that the driver’s eyes are actual flames and at Salim totally knows by now that his cabbie is supernatural — but I just mean the scene is crackling with their attraction, that’s all.)

The driver comes upstairs to Salim’s hotel room, where they have incredibly beautifully shot, tender, hot and transcendent sex. “I do not grant wishes,” the driver says once more, just as they’re about to have a literally religious moment. “But you do,” Salim softly replies. Aw, guys! That’s so sweet, I just want to  — oh hold on a tick, we’ve got full frontal. But it’s cosmic, attuned-to-the-universe full frontal, so it’s ART. (No, seriously, this scene is gorgeous and kinda perfect.)

When Salim wakes up the next morning, the driver is gone — as are his clothes, ID and the sample case of tchotchkes he’s been peddling to no avail. (Remember when we saw the driver in the diner last episode? He was wearing Salim’s suit!) But the driver has left behind his own clothes and ID, giving Salim the new life he’d yearned for. Next thing we know, Salim is behind the wheel of the taxi, happily informing his new fare, “I do not grant wishes.”

Some final thoughts on this interlude: Props to American Gods executive producers Bryan Fuller, Michael Green, Neil Gaiman, director Guillermo Navarro and everyone involved in this scene — not to mention actors Omid Abtahi and Mousa Kraish. I haven’t seen a love scene between two men this done this well, or this affectingly, before. It’s insane, don’t get me wrong, but only in the best way. We’ve all felt the need to connect with someone; the fact that the show is able to keep that universal truth at the forefront of a sequence that prominently features fiery, fantasy dong is a refreshing delight.

COIN TRICK | But where’s Mad Sweeney, you ask? Oh, he’s totally spit outta luck, thanks to giving Shadow the coin he wound up tossing on Laura’s grave. The leprechaun tracks Shadow down and is vexed to hear where his golden piece wound up. He’s even more irked when he digs up Laura’s final resting place and finds the coffin — with a coin-shaped hold burned straight through its lid — empty. Wait, what?

At the end of a long day, Shadow returns to his hotel room, and there’s someone sitting on his bed. “Hi, puppy,” Laura (?!) says.

Your turn. What did you think of the episode? Hit the comments to let us know!