Along came a spider… and immediately set a new bar for divine social commentary.

This week’s American Gods featured the introduction of Orlando Jones’ Mr. Nancy — aka Anansi, the spider figure from African folk tales — who showed up after he was summoned by slaves headed for the colonies in the 1627- “Coming to America” vignette that opened the episode.

As TVLine previewed earlier this week, Jones gave an impressive monologue as the natty Mr. Nancy encouraged the men on board to rise up against their white oppressors. At a press event in April, the actor told TVLine that he didn’t improvise anything said in the scene.

“There was no need to shift the verbiage in that one,” Jones said. “It was very clear and beautifully put.”

And though he acknowledges that Mr. Nancy’s speech has particular relevance in our current social and political climate, he’s quick to point out that the scene is about something different. (Though I hear it did earn him a standing ovation from the other actors on set.)

“As much as the people at home resonate with you, that’s not who I’m talking to,” he said. “I’m talking to 50 slaves who are frightened out of their minds, who have no understanding where they’re getting ready to go and who are looking for some sort of glimmer of hope in a really dark place. It requires [him] to connect with them and pull them out of that despair, and to ignite them in a fire.”

After all, “In order to worship Anansi,” Jones added with a grin, “you’ve got to let the motherf–ker burn.” (Which happened literally when the slaves realized what was happening to them and revolted.)

“Once they’re angry, now we can get something done,” Jones said.

Elsewhere in “The Secret of Spoons”:

* Shadow survived his fight with Technical Boy’s faceless goons, but he was in pretty rough shape — and he still doesn’t know who cut down his noose and saved him from certain death. While sleeping one night, he dreamt of Laura; when he woke, he finally started to actively grieve her death.

* The ex-con, with Mr. Wednesday in tow, returned to clean out his and Laura’s home in Eagle Point, Ind. Once that painful process was done — he found a photo of Robbie’s junk on Laura’s phone, ugh — he and Wednesday got back on the road.

* While Shadow was doing some of Wednesday’s shopping at a big-box store, a black-and-white version of Lucille Ball started talking to him from the television displays — even when he unplugged them. Book readers surely recognized this as the first incarnation of the New God Media (played by a sublime Gillian Anderson). She said that she thrives on “time and attention, better than lambs’ blood” and offered him a job that he quickly refused. Before she ended her pitch, Media warned Shadow that guys in his position “end up a suicide, every time.” 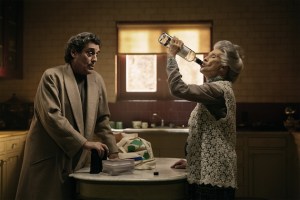 * In Chicago, Wednesday and Shadow paid a visit to the dingy apartment belonging to the Zorya sisters: Zorya Vechernyaya, Zorya Utrennyaya and Zorya Polunochnaya. Vechernyaya was very old, didn’t seem to want visitors and drank vodka straight from the bottle like a boss. Man, Cloris Leachman just gets better and better, doesn’t she? The far more meek, slightly younger Utrennyaya quietly accepted a gift of romance novels from Wednesday (and HA! to the moment she realizes Shadow looks like he just stepped off one of those covers). The youngest sister stayed in her room, ostensibly sleeping.

* The apartment’s final inhabitant, Czernobog, returned home irate to see Wednesday there. (And Ian McShane could not have played that moment with the lamp any better, right?) Czernobog’s whole thing is that, in his heyday, he killed cattle in the stockyards with one swift blow to the head, and he was very good at it. Oh, and he has no interest in agreeing to Wednesday’s proposition and joining them on the trip.

* So Shadow offers a different deal. He and Czernobog will play checkers. If the Russian wins, he gets one chance to hit (and likely murder) Shadow with his giant, cow-killing sledgehammer. If Shadow wins, Czernobog will come along on Wednesday’s ride. The men agree… and then Shadow loses. Eep!

Your turn. Thoughts on the episode and Mr. Nancy’s big scene? Tell us about it in the comments!