By the final moments of the American Gods premiere, a man named Shadow Moon has lost his wife (not to mention all faith in their love), he’s been beaten and nearly hanged, and he’s forged a deal with an enigmatic character who might not be working in Shadow’s best interest.

But Shadow hasn’t been arrow’d to death on a scary, foreign shore, unlike other unlucky souls in the Starz drama’s first hour, so there’s that…?

In a moment, I want to hear what you thought about the start of the series based on Neil Gaiman’s 2001 novel, but first, let’s review the highlights of “The Bone Orchard.”

WELCOME SPLAT | We open on a man writing with a quill pen in an office somewhere. He inks “Coming to America 813 CE” on the page of a big ol’ book, and then we’re transported — via voiceover — into the story of some of the first people to arrive on the shores of what would eventually come to be known as the United States. Unfortunately, their welcome wagon is driven by biting insects, hunger and a hostile native people who are (see above) really, really good with bow and arrow.

But when the explorers try to return to their homeland, there’s no wind to propel their boats away from this harsh new realm. When poking out their own eyes doesn’t work as a sacrifice to their god, known as the All-Father, they decide to double down with a massive fight that they hope will catch the deity’s attention. And that’s when one thing becomes clear: If you don’t see something kinda artful and poetic and/or entertainingly bats–t in the series’ choice to show one warrior killed by a sword through the throat wielded by a flying arm severed from another warrior moments before, then American Gods might not be for you.

Anyway, the battle apparently pleases the All-Father — or, y’know, weather just happens — because the wind kicks up, allowing the surviving Vikings to get the heck outta there. As the narrator informs us, when Leif Erickson arrived a century later, “he found his god waiting, along with his war.”

STORM’S BREWIN’ | Next thing we know, we’re in a present-day prison, watching a ripped, bald guy lift weights in the yard. Wait, what? The opening bit is the first of the series’ “Coming to America” vignettes, little stories about various gods that — more often than not — have no direct link to the main story. But as someone who’s seen the first four episodes, I can add: Damn, they’re cool.

The prisoner is the aforementioned Shadow Moon, who is five days away from being released but who can’t shake the feeling that something terrible is about to happen. He also, apparently, watches a lot of Gilmore Girls. “I smell snow,” he remarks to another inmate.

A call home to his wife, Laura, who affectionately refers to him as “Puppy,” does nothing to allay his fears. When Shadow broods in bed later that night, practicing coin tricks in his bunk, a storm brews outside. He dreams of Laura. He dreams of a sky straight out of an acid trip. And he dreams of a forest strewn with human bones, where a tree reaches its branches toward Shadow and then cuts him to ribbons.

The next morning, the warden calls Shadow into his office: Laura died the night before in a car accident, so he’s getting sprung from the pokey a few days early.

ENTER MR. WEDNESDAY | At the airport, an agitated and grieving Shadow is having a tough time readjusting to life outside his cellblock. He notices an old, doddering man at the gate who wins the sympathies of an airline employee who’d been mean to Shadow earlier: Though the man doesn’t have a ticket, he somehow winds up in first class on the flight. And so does Shadow, when his seat is double booked, which puts him right next to the old man, who is making no effort to keep up the con that got him on board in the first place. He’s a slick sweet-talker, and Shadow quickly recognizes him as a fellow conman.

Shadow is nervous about flying during the ongoing storm. The other man, who introduces himself as Mr. Wednesday, is carrying on as though he’s parked at an all-inclusive resort’s swim-up bar: ordering drinks, making small talk, ogling any lady that happens by. He abruptly offers Shadow a job, but the former detainee says he’s got a gig waiting for him at his friend’s gym. “No, you don’t,” Wednesday replies (and if I weren’t already completely convinced that Ian McShane was the right person for this role, that line reading would’ve nailed it). Wednesday seems convinced that Shadow will eventually join the payroll, because “I usually end up getting what I want, on average, over time. It’s about getting people to believe in you. It’s not their cash. It’s their faith.” Remember that. 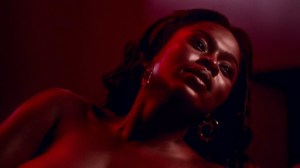 SWEET LOVE HANGOVER | In another “Somewhere in America” interlude, a beautiful, Los Angeles woman named Bilquis brings a dopey guy she met online back to her room. “I’m not what I once was,” she says — and if you’ve read the book, that’s very funny — but he trips all over himself telling her that “you’re the sexiest g–damn thing I’ve ever gotten to touch for free.” She asks him to worship her “with your words, with your body.” They have sex and it’s all pretty routine until he starts spouting off about her being a “strong queen on a throne of honey” and such, and that’s when it becomes clear that he’s slowly inching inside her — no, not like THAT. I mean his entire body. By the time he pledges his undying love, he’s entirely gone. Can’t wait for that eHarmony commercial!

YOU’RE HIRED! | Shadow dozes and dreams again of that tree, as well as a buffalo with eyes of fire that says, “Believe.” When Moon wakes, the plane has made an emergency landing short of its destination and he’s forced to rent a car and try to make it home that way. After yelling his frustration into the void at Indiana’s Shakamak State Park, he winds up at a bar where Wednesday also just happens to be a patron. Wednesday knows that Laura is dead, and he informs Shadow that his gym-owning best friend also is deceased. A ground-down Shadow eventually agrees to a coin toss that will decide whether or not he works for Wednesday: Though Shadow rigs the toss, Wednesday still wins. To add to the weirdness, a redheaded leprechaun (yep, you read that right) named Mad Sweeney seems to have a bone to pick with Wednesday — “Do you know who he is? Who he really is?” the fighting Irish says (remember that, too) — and Wednesday insists that Shadow do three shots of mead because “it seals our bargain.” And what service, exactly, will the ex-con provide for the mysterious old man? “You take care of things, generally, on my behalf.” 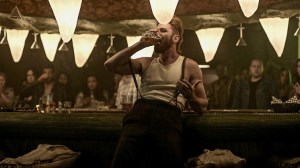 THEY’RE ALWAYS TRYING TO GET ME LUCKY CHARMS! | Then, things get really weird. Sweeney does all of these fancy tricks with gold coins, and Shadow wants to know how he’s seemingly pulling them out of thin air. The leprechaun says it’s no trick, then he starts talking smack about Laura, and the two men end up making each other bloody messes right there at the bar. Shadow wins, kinda, and takes a gold coin from Mad Sweeney.

Shadow wakes up the next morning in the back of Wednesday’s car, nursing a hangover. Weds informs him that they’re heading to Shadow’s hometown so he can put his affairs in order. Too bad Shadow doesn’t know what’s ahead; he’d likely choose to just keep driving.

Because at Laura’s funeral, Robbie’s bitter wife, Audrey, makes it clear that the pair died together… and that Laura had her head in his lap when the accident occurred. (You get what I’m saying, right? Because after that Bilquis scene, I’m all tapped out on creative ways to describe sex acts.) Audrey doubles down on the terrible when she propositions Shadow by his wife’s final resting place later that evening. He turns her down, then tosses Mad Sweeney’s coin into Laura’s open grave; he doesn’t notice when it quickly sinks into the soil, seemingly of its own accord.

TROUNCED BY TECHNOLOGY | A grim-looking Shadow later finds himself meeting a man named Technical Boy via a VR helmet of some sort. Technical Boy has a lot of questions about Wednesday and what he wants, but Shadow is pretty stymied by the entire situation. That’s likely because Technical Boy’s image is skipping and pixelating like a bad livestream, and he’s got faceless goons who eventually beat Shadow and string him up, leaving him to die in the rain… until someone (whose face we can’t see) steps in and absolutely destroys them. Like, rivers of blood. Like, splitting a thug in half. And because Shadow is starting to go gently into that good night, he doesn’t see his savior, either.

Now it’s your turn. Grade the premiere via the poll below, then hit the comments to gossip about the gods.