Things shift so quickly in the Bachelor universe.

A few weeks ago, producers had chosen Katie Thurston as the next Bachelorette, and Bachelor Nation approved the choice on social media after the news had been leaked during a reunion taping. And then host Chris Harrison decided to defend Rachael Kirkconnell’s past racial insensitivities during an Extra interview with Rachel Lindsay, and everything fell apart.

Now, Chris is on hiatus, Rachael is apologetic, Rachel is off Instagram (and possibly the franchise) and Emmanuel Acho is hosting the After the Final Rose special. And as viewers learned this Monday on The Bachelor: The Women Tell All, Katie is no longer The Bachelorette heir apparent. That “leak” got edited out, and the most Katie got was a sizzle reel full of warm and affectionate moments she shared with Matt. Looks like the producers really are trying to work on their hit reality show’s race and diversity problem, and the next Bachelorette will likely be Black, brown or Asian. Better luck next time, Katie.

But bravo to Katie for holding her own when everyone from Pieper to Serena C. questioned her motives for telling Matt about the toxicity and bullying going on in the house. Mari called Katie a hypocrite for talking smack about Sarah (remember her?) only to defend her soon after. But Katie called that “learning and growing.” Speaking of which, how shocked were you that Victoria actually apologized to Katie for calling her names? That’s a heck of a lot more than Ryan got from Victoria, who not only acted defensively but called Ryan emotional and questioned her “upsetness.” That’s not a word, ma’am.

Read on for six more shocking developments from The Women Tell All: 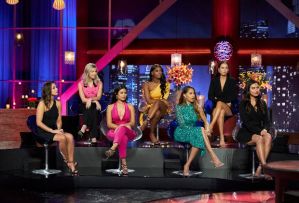 KATIE ON THE DEFENSIVE | Perhaps some of the animosity directed at Katie came from the fact that the other women were annoyed that she could be the next Bachelorette. But Katie didn’t help matters when she said the backlash some of the women received on social media was “karma.” That’s when Chelsea (and her awesome new blond ‘do) was like, “Um, excuse me?”

Katie said Chelsea questioned her, but Khaylah, who Katie described as one of the show’s best contestants, said Chelsea was actually trying to foster dialogue and understanding. Boom.

VICTORIA AND MJ ON THE DEFENSIVE | Victoria said that Ryan needed to have tougher skin because she did when viewers made fun of her swollen eye and conspicuous bra straps. But then again, Victoria confessed to Matt, who didn’t arrive until the final 20 minutes of the special, that she was wrong for saying mean things about him after getting kicked off. And in what was easily her most honest and genuine moment, Victoria said she did those things out of insecurity. Wow, Matt’s nice guy/high road ways have finally rubbed off on Victoria. As an added bonus, the blooper reel highlighting all of the times Victoria said “literally” grabbed laughs and even made the self-proclaimed Queen chuckle.

MJ, on the other hand, still seems to blame Jessenia for her exit. She didn’t apologize to Jessenia, but did admit that her “varsity/junior varsity” jokes, which is how she described the original contestants versus the late arrivals, went too far. Needless to say, MJ and Jessenia will never be friends.

BRITTANY AND ANNA CONFRONTATION | Chris, who shot the show before his leave took effect, called Brittany up to the hot seat, where she said she didn’t come on The Bachelor to be bullied. Sadly, that’s what happened when Anna told everyone that Brittany is rumored to be a high-end escort. Brittany said that while she appreciated Anna’s apology on The Women Tell All, it would’ve meant more had Anna reached out to her when the episode aired. Brittany also added a very timely message to actual sex workers. Although she isn’t one, Brittany said that no one should shame those who are sex workers because in the end, it’s an occupation and nothing more. Anna, in turn, said she spread those rumors out of insecurity and anger, and she is trying to be a better person. 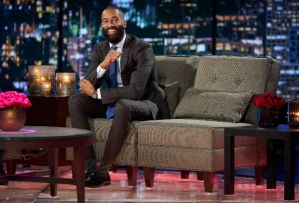 CRAZY OUTTAKES AND OPEN EYES | Apparently, there’s footage fans didn’t see, including a challenge that had the women putting their hands in boxes filled with insects and other gross and crawly things to nab wedding rings. In another challenge, women on a group date had to chug pancakes and beer, and in yet another, raw eggs. Ugh. Thank goodness for editing.

That said, the editors could only do so much to hide the fact that Matt kisses with his eyes open. Chris and all the women teased the now very bearded Bachelor about the quirk, and Matt said he now realizes that it is a very creepy thing to do.

MATT AND SERENA P. MOVE ON | Serena P. confessed that she was into Matt right up until he met her family, and then she realized that her feelings were not as strong as they should be. While that still doesn’t make a ton of sense, Serena said she wants her former boo to be happy. Matt thanked her for her honesty and said it allowed him to find the right woman after all, despite the fact that her rejection stung initially.

PIEPER ASKS FOR CLOSURE | It’s interesting that the very words Serena P. used to tell Matt why he wasn’t her person are very similar to what Matt ultimately told Pieper when she asked about their breakup. Although Matt seemed very into Pieper for a while, he got a lot closer to Michelle, Rachael, Brie and Serena P. and decided that Pieper didn’t inspire the same passion or investment. That’s not what he said, but that’s what he meant. If producers are paying attention, they should make Pieper the next Bachelorette. But hey, what do we know?