It’s a Bachelor scenario more predictable than a Neil Lane engagement ring on finale night: The longer a season of the ABC dating series runs, the more time its cast members will have to completely let us down.

In recent years, social media users have done the work that the Bachelor franchise’s casting department should be doing, uncovering contestants’ problematic pasts with just a few scrolls and swipes. Almost like clockwork, a Bachelor(/ette) season is interrupted by the news that, say, Garrett Yrigoyen liked a slew of bigoted memes on Instagram, or Eazy Nwachukwu was accused of sexual assault — or, most recently, that Rachael Kirkconnell, currently pursuing love with Matt James on The Bachelor, has a history of racist behavior. (Catch up on Kirkconnell’s actions here and here.)

What isn’t typical is longtime host Chris Harrison commenting on a given controversy, which he did do when photos began to circulate of Kirkconnell at an Antebellum-themed party, a deeply troubling event that makes light of the pre-Civil War era and reinforces racist imagery from that time. When asked about the photos by Rachel Lindsay — The Bachelorette‘s first Black lead — Harrison decried “cancel culture” and defended Kirkconnell’s reputation, asking Lindsay, “Is it [not] a good look in 2018, or is it not a good look in 2021?” He later apologized for his actions; Kirkconnell apologized for hers, too. And now, Harrison plans to step aside from the franchise “for a period of time” in order to educate himself “on a more profound and productive level than ever before,” he says.

It’s not yet clear how long Harrison will be gone; currently, he’s only confirmed to miss the After the Final Rose special for James’ current season. But as ABC considers when to welcome Harrison back, might I suggest he doesn’t return at all? 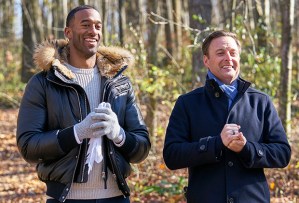 The Bachelor franchise has struggled with — and outright mishandled — the topic of race for years. James is the first Black bachelor in 25 seasons, while The Bachelorette‘s 16 seasons have only had Lindsay and Tayshia Adams as Black leads. Then there’s the overwhelmingly white groups of contestants on each cycle (which leads to overwhelmingly white screen time, and overwhelmingly white finalists), and the shows’ habit of casting men and women with racist opinions, like Lee Garrett on Lindsay’s season.

And though these series are slowly, slowly making improvements, by way of more diverse casts and increasingly candid conversations about race, it’s especially important that the franchise doesn’t give Harrison a mere slap on the wrist, then return to business as usual. ABC and The Bachelor/ette‘s creative teams have hedged on questions about diversity for years, but they have an opportunity here to make a meaningful change: If the franchise is committed to doing better, Harrison’s time as host should come to an end altogether, instead of resuming after a few weeks of vague “education.”

If we’re assessing the Bachelor shows honestly, they don’t really need a host at all. What would change, exactly, if a host weren’t around to announce, “Hey, there’s only one rose left on that table!”? (Answer: Nothing.) Would any of us miss the meandering chats that Harrison has with contestants when they’re unable to sort through their emotions? (Answer: No.)

But assuming ABC wants someone running the show, there are ample options for Harrison’s replacement, many of them young and diverse Bachelor/ette alumni who can bring fresh perspectives and charisma to the series. Lindsay, who already serves as an Extra correspondent and podcast host, would be an obvious choice, though her current frustrations with the franchise may lead her to cut ties with it. Even then, charming alums like Mike Johnson or Eric Bigger could fill Harrison’s shoes nicely, or a rotating lineup of guest hosts could freshen the stale proceedings even more.

Harrison’s apologies, though eloquent, fit a recent mold of celebrity mea culpas that insist, “I promise to do better,” with no substantial follow-up on how that change will occur. Many a well-written Notes App apology has floated off into the digital wind, ultimately fixing nothing and prompting little introspection. Harrison’s words may be sincere now — but his return to the Bachelor franchise would render it all meaningless.