“I would very much like to see a change there… by increasing the pool of diverse candidates,” Dungey said 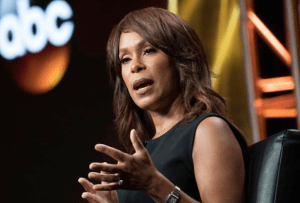 on Thursday at the Television Critics Association summer press tour.

(Previous ABC boss Paul Lee told reporters in January that he would be “very surprised” if the summer 2016 edition of The Bachelorette “isn’t diverse.” Indeed, JoJo made her picks from one of the series’ more diverse casts… but by Week 3 all of her nonwhite options had been sent home.)

Given that track record, it is unlikely that either the Bachelor or Bachelorette will ever be fronted by a non-white lead a la Season 2 of Lifetime’s reality-TV-skewering UnREAL, seeing as the franchise remains committed to picking from leftovers/castoffs (versus returning to its roots and finding a legit “catch”… a la UnREAL).

“The show has very much been in this cycle where the first runner-up becomes the lead in the next cycle,” since they are a known entity to an invested audience, Dungey said, “and it has worked very well for us.”

Would you like to see The Bachelor or Bachelorette “end the cycle” and cast a fresh face for an upcoming season?