It doesn’t take too much to fall out of favor on The Bachelor. In Sarah’s case, her fainting spell during the rose ceremony, and later, an ill-timed decision to crash the group date, sealed her doom Monday night and turned her into Season 25’s latest persona non grata.

The man of the hour, Matt James, only made things worse by running to Sarah’s side every time she seemed out of sorts. This created a festering rivalry amongst the women that turned positively putrefied by episode’s end.

“Knowing that she’s healthy is most important now,” Matt, 28, says, sounding like a TV doctor even though he works in commercial real estate. But to Matt’s point, maybe Sarah, 24, legitimately felt faint. This show is a lot, and Victoria tattling on Marylynn to Matt did cause a great deal of negativity and confusion. More on that later.

But — and it feels super strange agreeing with anything Victoria says — the timing of Sarah’s wooziness could be construed as manipulative. It’s also an opinion that quickly took flight when Sarah, who wasn’t even on the group date, heard 10 different contestants read the individual racy romance scenes they’d written to Matt and started feeling insecure. Instead of waiting to talk to Matt about her fears later that night, the following morning or perhaps during a future chat, Sarah sauntered into the evening portion of the group date and interrupted Katie’s time with him to “figure things out.”

Sarah wanted Matt to convince her to stay and to tell her she’s special because she opened up to him about her father’s terminal illness, which he did happily. He also did so at the emotional expense and time of the group haters, um, daters who didn’t get alone time with him. Sarah left and Matt decided to wrap things up and give his rose to Rachael, 24, who wrote and delivered a sexy-but-tasteful piece of prose. This only made many of the women angrier because they felt like Sarah cost them a rose that could’ve been theirs. Katie and Victoria even confronted Sarah about her actions.

Say what you will about Sarah, but she couldn’t have crashed the date without the producers allowing her to do so. Her immediate need for reassurance is especially odd on a dating show where all of the women are competing for the same man.

It’s also a shame that the show, now in its third week, has made it a point to not talk about race despite having the first Black Bachelor. Sarah’s tears hold more weight simply because she is white. The women of color on this show (and to be clear this is the largest number of non-white women to ever appear on a season of The Bachelor) had to be thinking about Sarah weaponizing her tears by using the privilege and power of her skin color. So why couldn’t they say it? Sigh.

In the end, the other women grew angrier by the hour and Sarah decided to run back to Matt’s arms — but this time, she did it on her way out the door. This of course gave Matt a chance to drop everything and run away with her… but he didn’t. Sarah is not Clare Crawley and Matt ain’t Dale Moss. Bye, Sarah and good luck to you.

MATT’S BEST MOMENT | Matt and Serena P. had a really sweet and romantic one-on-one date that included horseback riding, a charcuterie picnic, dinner and hot tubbing. And what’s not to like about 22-year-old Serena P.? The biracial beauty (her mom is South Asian and her dad is white) from Toronto works in publicity and doesn’t throw around the word “love” lightly. Plus her smile could brighten up a whole room. You hear that, Matt? She’s a keeper. 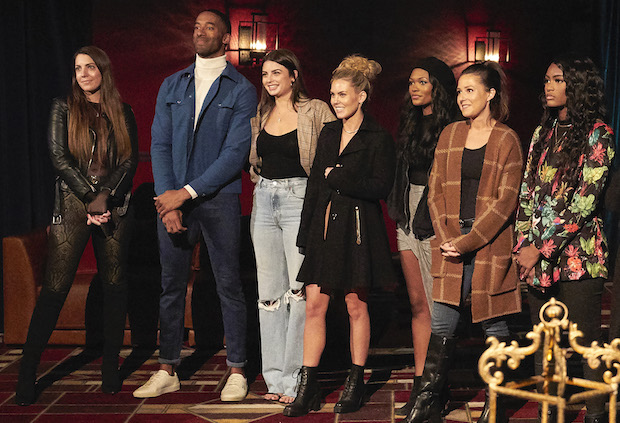 MATT’S WORST MOMENT | If you thought last week’s open-eyed kiss with Lauren was a fluke… it was not. Matt is still kissing women with his peepers peeled. He puckered up to frontrunner Bri, 24, with his eyes open, and Serena P. and Sarah too! Close your eyelids tighter, my dude. He was also dressed like a Scooby-Doo extra on the group date.

THIS WEEK’S TRAIN-WRECK MOMENT | Sarah hiding in her room and being a little too clingy with Matt was bad. But we mustn’t forget that Victoria’s conniving ways cost Marylynn, a woman of color she bullied, her spot. Matt also booted two Black women — Kristin, 27, and Sydney, 28 — to keep Victoria, who is arguably a producers’ plant. Just because Sarah was worse than Victoria this week doesn’t mean she gets a pass for past sins. Besides, Sydney was too classy for The Bachelor and was the first one to hug Matt goodbye in spite of being rejected.

BACHELORETTE STOCK FALLING! | Abigail, 25, has wonderful chemistry with Matt but didn’t manage to land any alone time with him on this week’s installment. As a result, she too grew cross with Sarah and questioned the San Diego broadcast journalist’s motives. Meanwhile, Anna still hasn’t spent quality moments with Matt but her facial expressions are everything.

Who are your current frontrunners, heading into Week 4?