THE PERFORMANCE | Truthfully, Olsen has been worthy of Performer of the Week recognition for just about every week of WandaVision‘s run. As the Disney+ series gave us lessons in sitcom history, Olsen dazzled at every turn, keeping us as spellbound as the town of Westview with her charming comedic performance.

And though WandaVision seems to have left the sitcom framework behind for good, Olsen’s performance in Episode 8 was no less compelling, if tonally different, than her many weeks spent as a TV housewife.

During “Previously On,” Wanda was forced to revisit some of her life’s most traumatic and devastating moments, depicting for Agatha Harkness (a delightfully devious Kathryn Hahn) how life inside the Hex came to exist. With each flashback she encountered — her parents’ death, her time at Hydra, a bittersweet memory of Vision comforting her — Wanda looked more and more burdened by her own grief, as if it were a tangible weight hanging around her shoulders. And Olsen, with her weary eyes and quivering bottom lip, managed to portray how deep Wanda’s sadness ran without saying many words at all.

At the end of the episode, upon visiting the patch of New Jersey ground where Vision had planned to build a life with Wanda, her grief and fury quite literally boiled over, bursting out of Wanda in an explosion of red light that transported Westview back to the ’60s. But as effective as Olsen’s full-bodied sobs were in that moment, it was an earlier, quieter scene that left an even more indelible impression on us: Wanda’s heartbreaking visit to Vision’s corpse at S.W.O.R.D. headquarters. We’ve already seen how convincingly Olsen can communicate Wanda’s all-out rage — but here, as a gutted Wanda admitted, “I can’t feel you” to Vision’s lifeless face, the actress proved she can also shatter us with her voice barely above a whisper.

THE PERFORMANCE | Jill Baxter is arguably the beating heart at the center of HBO Max’s searing HIV/AIDS drama It’s a Sin. She’s the glue keeping her chosen family of (mostly) young gay men together. And as the Russell T. Davies-penned limited series progressed deeper into the 80s, it was her inner activist’s rallying cry that shattered her inner circle’s omnipresent denial. Through it all, West infused her character with unfaltering warmth and steely determination. But it was in the finale — and one unforgettable sequence in particular — where the Years and Years actress’ deep well of artistry was on full, heartbreaking display.

The scene in question found Jill meeting up with her BFF Ritchie’s austere mother Mrs. Tozer (played with master class-level precision by English powerhouse Keeley Hawes) in the hopes of securing an elusive visitation to see her ailing friend. Just as it seemed the tightly wound matriarch was on the verge of acquiescing, she pulled the rug of hope out from under Jill by informing her that Ritchie had already died.

West beautifully and wordlessly rendered the shock and horror that immediately followed, her quivering lips gasping for air. The numbness quickly morphed into rage as the reality set in that the woman standing before her needlessly prevented her from seeing Ritchie one last time.

As Mrs. Tozer attempted to absolve herself of responsibility, Jill shut her down, but quick. “It is your fault… All of this is your fault,” she asserts, West layering each word with a no-f–ks-to-give — and profoundly satisfying for this particular viewer — abandon. She then painstakingly connected the dots for Mrs. Tozer, schooling her on how her cold and “loveless” soul filled Ritchie with shame and turned him into a killer. And West fully embodied the injustice behind Davies’ transcendent dialogue. “He kept shame-going by having sex with men and infecting them and running away. Because that’s what shame does: It makes him think he deserves it.

“So that’s what happened in your house,” Jill seethes, West punctuating her alter ego’s rage with an aggressive finger pointing. He died because of you.” It’s a Sin, meanwhile, thrived in large part because of West’s superbly visceral work. 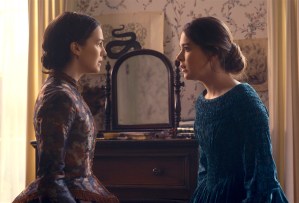 HONORABLE MENTION | The repressed emotions between Dickinson‘s Emily and Sue have been sitting on a simmer all season long, and they finally boiled over in this week’s Season 2 finale. Hailee Steinfeld and Ella Hunt knocked out of the park in a passionate, emotionally raw scene, with a hurt Emily insisting she wanted Sue out of her life for good. She accused Sue of having no feelings, and Sue admitted she was right: “The only time I feel things is when I’m with you.” Steinfeld showed a surprising fire as Emily angrily shoved Sue up against the door by her neck, and Hunt matched her on every emotional beat, with the two finally giving into their desires and collapsing into each other’s arms. We’ve been waiting two seasons for Emily and Sue to get together, and Steinfeld and Hunt’s stellar work made it worth the wait. 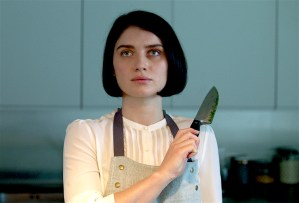 HONORABLE MENTION | Netflix’s thriller Behind Her Eyes is already notorious for its WTF twist ending — we couldn’t begin to explain it if we tried — but it boasted some pretty great performances, too, especially The Knick alum Eve Hewson, who shines (and shocks) as pill-addled housewife Adele. Hewson was fascinating to watch throughout, but she saved her best work for the finale, with Adele unraveling and screaming wildly at her friend Louise when she wouldn’t do her bidding. Plus, the show’s final killer twist added another layer of nuance to Hewson’s work; we kind of want to go back and watch it all again, just to see what subtle clues she left for us. All of Behind Her Eyes‘ wild twists wouldn’t work without some real human emotion to ground them, and Hewson delivered, in a tour de force that truly contained multitudes. 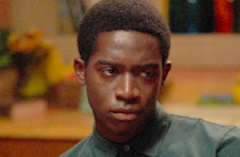 HONORABLE MENTION | Damson Idris delivered an electrified and versatile performance in the two-episode premiere of Snowfall Season 4. It’s a turn that allowed Idris to use both obvious physical vulnerabilities, such as the limp and cane Franklin now has after surviving a shooting, and the internal ones marked by the simmering grimaces that surfaced whenever his authority got tested. But the most moving moment was also the portrayer’s most quiet as Franklin’s once absentee father Alton (The Walking Dead‘s Kevin Carroll) reminded his son of his innocent childhood obsession with Kung fu. Alton then asked if Franklin could take off one night as a calculated crime boss to nostalgically watch martial arts VHS tapes. Capturing the character’s thawing numbness, Idris’ Franklin stifled his tears and slowly turned to hug his father and mourn the sweet connection they’ll never share again.