This week on WandaVision –– in the season’s penultimate (and longest) episode — Agatha Harkness sought answers about how Wanda conjured Westview, and S.W.O.R.D.’s plan was revealed.

“Previously On” kicked off with a “Previously on…” that included clips from Infinity War and other MCU movies, before using a version of the Marvel fanfare that closed with a logo that turned purple, as in Agatha’s magic. We then flashed back to Salem circa 1693, where Agatha was magically bound to a stake by her coven, accused of practicing the darkest of magic. Agatha argues she simply “bent the rules,” but the coven proceeds to zap her en masse with magic… and yet she appears to not only sustain it, but use the process to drain everyone of their life force. Breaking free of her magical binds, she knocks them all down with a burst of magic — before draining the coven’s “mother” or her life force as well.

Back in Agatha’s Westview basement, circa now….

As Wanda worries about Billy and Tommy, Agatha laughs at how her fellow witch’s accent “really comes and goes!” Agatha makes clear that because the chamber is circled with runes that she created, only her own magic works here. Agatha shares a few of her own secrets (including how fake Pietro aka “Fietro” was a crystalline possession and not necromancy, given that Wanda’s actual brother is d-e-a-d), before detailing her professional regard for what Wanda pulled off with Westview, using wide-scale mind control and illusions — basically, “magic on autopilot.” Wanda insists she didn’t do anything, forcing Agatha to explore her adversary’s super-tragic past by curing up “some real reruns.”

At first, they visit Wanda’s childhood home in Sokovia, where we see that amid the din of gunfire in the war-torn streets, she, Pietro and their parents would watch American sitcoms every night, as a means to practice their English. (Wanda’s go-to pick was a Dick Van Dyke episode in which Rob has a dream about aliens using walnuts to take over the world.) The serene scene is cut short by the explosion that decimated their home and instantly killed Mama and Papa. Wanda and Pietro, as we knew, huddled under a bed, watching an unexploded Stark Industries missile beep, beep, beep just inches away… for two whole days.

Surveying that first flashback, Agatha remarks, “I see a baby witch obsessed with sitcoms and with years of therapy ahead of her.” But she must know: “Where did you get the ‘big guns,’ Wanda?” 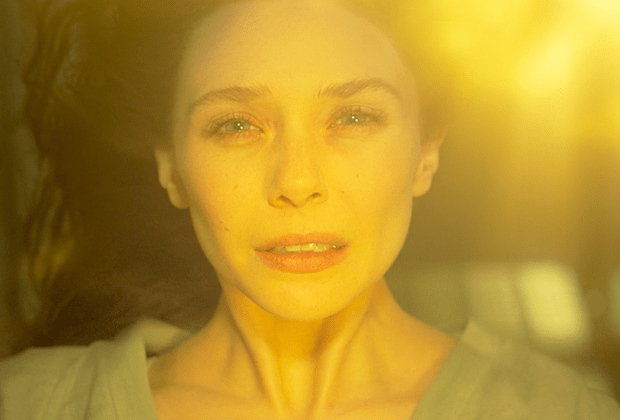 Their next stop is the Hydra facility where Wanda and Pietro “joined an anti-freedom terrorist organization” (as Agatha put it) to cope with their loss. As a volunteer for Hydra’s experiments, Wanda is made to touch a sample of Loki’s scepter; as she does so, it reveals the Mind Stone and she is consumed by a wave of energy inside of which she sees what we know to be the Scarlet Witch silhouette. “An Infinity Stone amplified what otherwise would have died on the vine,” Agatha observes.

Next up is Wanda inside the Avengers compound, forlorn after losing Pietro in Age of Ultron. Here she is watching Malcolm in the Middle before inviting in an eavesdropping Vision. He invites her to talk about her loss as a means of finding comfort, but she says that she can only feel waves of grief knock her down again and again. “It can’t all be sorrow,” he suggests. After all, “What is grief if not love persevering?” Wanda finds some comfort in his POV, as they settle in to enjoy some sitcom laughs.

But now, with Pietro and Vision both dead, Agatha wonders, “What happens when no one is there to pull you back from the darkness? Tell me how you did it,” creating Westview. We then see the true nature of Wanda’s visit to S.W.O.R.D. versus the carefully edited version that Director Hayward showed the troops a few episodes back. Hayward apparently told the guard at the front desk to allow Wanda in. She found Hayward and asked to see/claim Vision’s body, if only to give her love a proper funeral. Hayward invited her to observe his technicians chopping up Vision/”dismantling a sentient weapon.” After all, they don’t have the ability to bring him back to life, as she might, he hints. Hayward isn’t about to let Wanda walk off with $3 billion worth of vibranium, so she must say her goodbye here. But when he goes so far as to state that Vision “isn’t yours” to take, she angrily shatters the observation window and floats down into the lab. 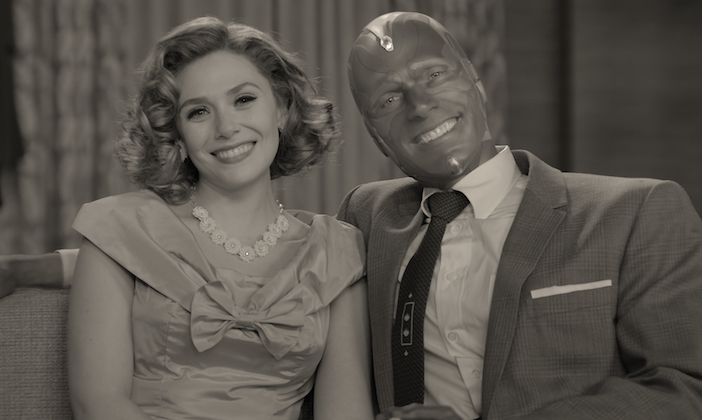 Upon confirming that she in fact can no longer “feel” Vision, she quietly leaves… gets in her car… and drives to Westview, N.J., which we see was a sad little ‘burb. She pulls up to an empty lot, which we realize Vision had bought for them to build a house on, “to grow old in.” Wracked with grief, Wanda falls to her knees and unleashes a massive red energy wave that transforms the house and then the whole town into an idyllic sitcom enclave. She then fabricates a version of Vision a la Rob Petrie, and her own appearance follows suit. “Wanda! Welcome home…,” Vision says, as they settle in for a night of TV.

Back in the present, Wanda sees the stage lights and props positioned around the sitcom set, as Agatha claps from the studio audience area. Wanda hears her sons cry out, and upon racing to the street outside, finds them being strangled by a fully witchy Agatha’s magic. “You have no idea how dangerous you are,” Agatha says, explaining that heretofore the likes of Wanda was “a myth, capable of spontaneous creation.” What Wanda has been up to is “chaos magic” Agatha states, “and that makes you… the Scarlet Witch!” 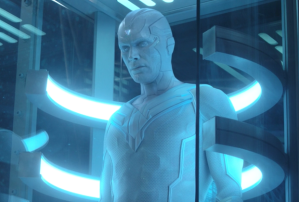 We then go to the credits, and midway through get a “bonus” scene in which Hayward is told that S.W.O.R.D.’s plan is ready to launch. We realize that he is using a sample of Wanda’s energy, absorbed by the drone, to power up a re-assembled, all-white Vision!

What did you think of “Previously On,” and what are your predictions for next week’s finale?