Miguel Rivas might be the last person any of the Pearsons go to when they’re making decisions. But in Tuesday’s This Is Us, his portrayer called all the shots.

Series regular Jon Huertas helmed “The Ride,” an hour that followed along as Kevin/Madison, Kate/Toby/Ellie, Rebecca/Jack and Randall/Beth brought new babies home from the hospital over the years. And at the end of the episode, a new installment of the Rebecca-centric flash-forward showed Annie and Deja — who was pregnant — arriving at Kevin’s house. (Read a full recap, and then take a deep dive into the flash-forward with our detailed guide.)

TVLine hopped on the phone Tuesday with Huertas to discuss his episodic directorial debut, which included filming scenes with his very pregnant co-star, Mandy Moore. (“She was right there. She could’ve actually broken her water on one of my shoot days!”)

TVLINE | How did it come about that you directed this one?
I’ve been slotted to direct the show, pretty much since the first season. We have a show that is a very desirable show to direct because of our cast. A lot of television and feature film directors have wanted to sit in that director’s chair. So me being a first time episodic director, I had to wait my turn, bide my time. One of the things I wanted to make sure — we had this conversation, me and [series creator] Dan Fogelman — I didn’t want to be in my first episode that I directed. I wanted to be able to focus on directing, because it’s eventually where I wanted to be professionally, full-time. To be an actor in it, too, would’ve been a lot harder. We found a hole where I wasn’t going to be in the episode I filmed, and I wasn’t as much in the episode before. They were able to stack all of my work up so I could be there for the entire prep period, because that’s the most important part of directing is the prep. 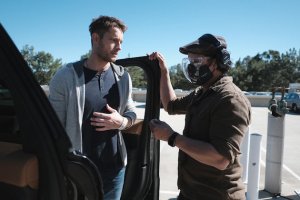 I think Dan also felt that this episode fit for me, from conversations that we’ve had in the past, what Kevin’s character is to me, he’s the character that I connect with the most, personally. His desire to be accepted by his family. This is that moment when Kevin has this realization that I have to dedicate myself and my time to this new family, and that’s a decision that I had to make at one point. Where I couldn’t dwell on what I was missing in my life, family-wise. And it had to be about me and my family, and more about my future than my past. That’s something that I thought was really great about this episode, what they did for Justin [Hartley]’s character, making him have that decision to finally do a real proposal and really commit to this family that he’s created with Madison.

TVLINE | These flash-forwards are heavily scrutinized by fans — and writers like me. With that in mind, did directing those scenes differ at all from how you approached the rest of the episode?
Yes and no. What’s not different is that all of our episodes are a smaller piece of a larger story. And so the way that that flash-forward ties into that overarching story of the entire series, to me I look at it as one of the Legos in this thing that I’m building. But the part that we have to focus on is what are they saying, what are they doing and how do we make sure that they’re not giving anything away? And how do we shoot it to make sure of that? And so the challenges were just trying to find actresses that embodied who our younger versions of who Annie, Tess and Deja are. That was the most challenging element, and I think we succeeded very well in that. There’s a scene that’s cut out of the episode that has the adult Annie in it that is just remarkable how much she’s like our Annie. So much like Faithe [Herman]. But for time we had to reduce some of the episode. When I see those three girls standing next to each other, from Randall’s POV, it blows me away how much they look like them, how much they sound like them, how much they embody them.

…When Randall has that speech with Beth about wanting to have a big family and a large family tree, that was another way to show that he got his dream, his wish, with these three beautiful girls. And one of them, Deja, we reveal in the car that she’s expecting a baby. That’s speaking directly to where he says, “You’re going to give me grandchildren.” For me, that was the most important part of that scene, not so much what’s happening in the future with the family and Rebecca. 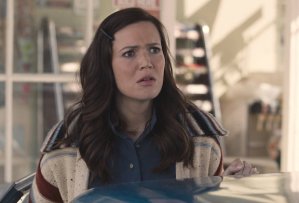 TVLINE | Rebecca as a new mom dealing with everything that’s happened to her isn’t a Rebecca we’ve seen much on this show. This episode directly deals with the character’s grief and shock. What did you and Mandy Moore talk about when you talked about those scenes?
The last time we saw Rebecca in that place emotionally was in Episode 1×03, from the first season. And so I watched that episode and I said, “I want to get this right. I want it to feel like a piece of that episode.” But at the same time, we’re at a different time — the car ride home… the whole episode is about everyone’s ride home with new babies — so what does that piece feel like? Because the reality is that you have to be a mom right now… We had to show the moment where she decides, “I have to be a mom.” … That was important for us: to have Mandy play the sadness of losing a child, but also play the need to be a mother, which is almost instinctual. So we talked about that a lot, and I think it came across really well. Mandy did an amazing job of really walking a fine line to maintain a little bit of that sorrow but also to find this instinct.

And what was great was that Mandy herself was about to become a mother while we were shooting it. She was 37 weeks pregnant. She was right there. She could’ve actually broken her water on one of my shoot days. And I am so glad she did not. [Laughs] [Editor’s note: On Tuesday, Moore and husband Taylor Goldsmith announced the birth of their son, Gus.]