Less than two months after he reprised his role as Tim “The Tool Man” Taylor on Last Man Standing, Tim Allen is revisiting his Home Improvement roots yet again, by way of History Channel’s Assembly Required.

Allen and former Tool Time sidekick Richard Karn (aka Al Borland) serve as hosts of the reality competition. Each episode pits three of the best and brightest makers from across the country against each other as they complete a series of mind-blowing builds. Each build is judged by three criteria: Quality, design and functionality.

Due to the pandemic, each maker competes from their own home shops. Allen and Karn pop in virtually to deliver commentary from the studio, and oversee the makers’ work across two challenging builds. DIY YouTuber April Wilkerson is also on hand as the series’ “resident expert.” 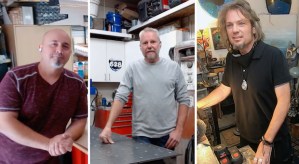 Wednesday’s premiere featured the following makers: Alex, a former marine who builds scale models for architects; Jesse, a jack of all trades who is “pretty dang good” at a little bit of everything; and Sean, a metal sculptor whose unkempt hair drove Allen mad.

First up was the Make or Break Challenge, a 90-minute mystery crate build. For this particular challenge, Alex, Jesse and Sean would have to build a Class-A fire extinguisher, as well as a backpack to carry it, using only the items in the crate and the resources in their shops. When their time was up, the makers would get just one chance to snuff out flame with a stream of water. The two makers with the most effective builds would advance to Round 2.

In terms of functionality, Sean’s build was at the top of Allen’s list. In terms of design, Alex had the others beat. Jesse, whose extinguisher lacked water pressure, was eliminated.

Next up was the Run With It Challenge. Sean and Alex had five days to build an all-season leaf blower and ice melter. To get them started, the makers were shipped an intact leaf blower to disassemble and upgrade. They could also repurpose parts used for their initial builds in Round 1. What they didn’t know was that April had tinkered with the spark plug in each blower. Over the course of the challenge, Allen and Karn watched with bated breath to see when Alex and Sean would discover April’s “secret fix” and repair the damage.

Once the builds were complete, they were shipped back to the Assembly Required studio for Allen and Karn to put to the test. Design wise, both builds were mighty impressive: Alex modeled his all-season blower after a North American P-51 Mustang; Sean encased his entire machine in hand-hammered steel. In terms of functionality, both Alex and Sean’s builds managed to move an entire pile of leaves across a parking lot. But when it came to melting four-inch icicles, Alex’s World War II-inspired blower was no match for the mother of all dragons. In the end, Sean walked away with the $5,000 cash prize. 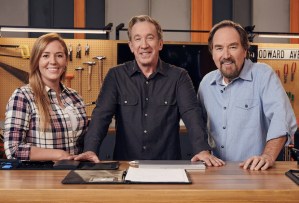 Allen and Karn’s latest reunion comes nearly 30 years after the premiere of ABC’s Home Improvement (which debuted Sept. 17, 1991). The pair was previously reunited on Last Man Standing, which is set to conclude its nine-season run this spring. Speaking with TVLine last year about a potential Home Improvement reboot, Allen said, “I always think about it because I still talk to everybody involved… I like the idea of doing it as a one-off, like a one-hour movie [versus a full-fledged revival series]. I like the idea of finding out where the boys are now, and where… Tool Time would be in today’s world.” For now, Assembly Required is the closest thing to it.

OK, now it’s your turn! What did you think of Assembly Required? Weigh in via the following poll, then drop a comment (or a grunt) below.