Tim Allen reprised his role as Home Improvement‘s Tim “The Tool Man” Taylor during Thursday’s Last Man Standing. In the episode, Vanessa hired the former Tool Time host (who was sporting a vintage Binford Tools t-shirt) to handle a series of home repairs. The half-hour concluded with a very meta conversation between Allen’s alter egos, which also alluded to the Fox sitcom’s fast-approaching series finale.

Below, showrunner Kevin Abbott discusses the unlikely crossover event (which paid homage to a late Home Improvement cast member) and reveals how Mike and Tim’s discussion will get the Outdoor Man boss thinking about his third act.

TVLINE | Let’s start at the beginning. When did the idea first come about to have Allen reprise his Home Improvement role?
We had already broken the first seven episodes when Fox, as they always do, asked, “Hey, is there some big event, or something grabby you can have as your premiere?” And I just hate those [episodes]. I tend to think of our show as a small show, you know? We tell small stories — so, by definition, something big and stunty really doesn’t happen on our show. It was [our writer] Jon Haller who said, “We’ve had a lot of the Home Improvement people on, and the only major character we haven’t had is Tim Taylor,” and I went, “That’s brilliant. You are going to start getting paid, sir.” [Laughs]

TVLINE | Once the idea was pitched, was it as simple as writing the episode? Or did you have to get permission to use the Tim Taylor character?
There were some legal issues to jump through, believe it or not. I thought, well, this will be easy because I know Tim [will be into it], but we had to jump through some hoops. But [Home Improvement creators] Matt Williams, David McFadzean and Carmen Finestra were quite kind and very generous, and they allowed us to use the character and some of the bits, and we had a great time.

TVLINE | How protective was Allen of the Home Improvement legacy?
I would say very protective. I made him the promise going in that we would respect it. I actually loved Home Improvement, so I didn’t want to do anything that would in any way disparage that character and that franchise, I didn’t want to mock it in any way, shape or form. I wanted to be careful. Maybe they do something with [the ABC sitcom] in the future, a reboot or something, I don’t know, so I didn’t want to trap them in anything either. And Tim and I had several long discussions about where Tim Taylor would have wound up at this point in time. We changed the storyline a couple times in order to try to arrive at a place that we all felt very good about. 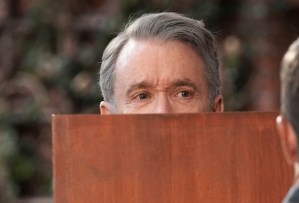 TVLINE | The episode featured a scene that paid tribute to Tim Taylor’s longtime neighbor, Wilson, and his portrayer, the late Earl Hindman. Did Allen offer his input?
He wanted to make certain that his affection for the Wilson character and Earl was in there and that it was honest. It was interesting, because the whole episode moved Tim. He was affected by it. He said to me, “You captured some of the things that we’re all going through, which is looking at our run here, moving on, and recognizing how good things have been…” I think he brought a lot of personal emotion [to the episode], and it was really quite powerful.

TVLINE | A lot of what Allen said to you about the episode comes through in that last exchange between Mike and Tim. Does that conversation propel Mike to start thinking about his retirement?
Yes, that’s exactly what propels him. He’s at that stage and wondering: What should he do next? Where will his life go next? Is his life on the track that he wants it to be on? And the fear when you’ve done well in life of trying something new, or taking it in a different direction and maybe not succeeding. We found it to be rich territory that we’re going to continue to explore this season. 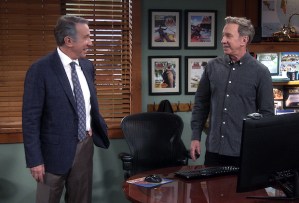 TVLINE | Soon enough, you’ll be writing Last Man‘s series finale. Now that Tim Taylor exists in the Last Man Universe, does that rule out a final scene that mirrors Newhart, where Tim wakes up next to Patricia Richardson’s Jill Taylor again after a long slumber?
[Laughs] We talked about a couple of scenarios, but I don’t know. I can’t make up my mind whether I want to go out kind of crazy or more heartfelt, but we’ll figure it out.

Did Last Man Standing‘s Home Improvement episode live up to your expectations — or maybe even exceed them? Grade it via the following poll, then drop a comment with your full review.