I think I’ve been broken since This Is Us‘ very first episode.

After all, the life event in that seminal hour was supposed to be a happy one: the birth of Rebecca and Jack’s triplets. And it was all going along great, until it really wasn’t. Then, in Season 2, Jack seemed totally fine after surviving the fire at the Pearson house, only to kick it at the hospital afterward while Rebecca snacked on a vending-machine candy bar. And the next season? When Kate went into labor way too early and the entire family camped out in the hospital waiting room while she had an emergency caesarian section?

Series creator Dan Fogelman & Co. have primed me to get excited about potentially great milestones, then brace for impact as though I’m polishing the Titanic’s starboard railing. So in this week’s episode, where everything goes right in multiple life-or-death situations and no one is left sobbing, I… don’t know how to handle it. And that’s BEFORE Randall and Kevin make up!

While I process, read on for the highlights of “In the Room.”

DISCRETE COSINE TRANSFORM | The episode starts in a way most hours of This Is Us don’t: by telling us exactly when and where we are in space and time. (See? I’m already shaken!)  We’re outside of a party in Albuquerque, N.M., in 1963, where a young man from India named Nasir is reading a book on advanced computer programming. A chatty woman who identifies herself as Esther from Argentina approaches and asks him to light her cigarette. Nasir seems a little awkward, but he perks up when she asks him to explain what he’s so interested in in the book. “I have no idea what you are talking about, but I know I love hearing you talk,” she says.

Later, we see them have their first child, a boy. And a few years later, we see Esther get mad at Nasir for staying too late at the office and missing family dinner. He tells her he’s super close to making progress on a technique that will revolutionize computers — and when she sees how passionate he is, she asks him to explain it to her so she can understand, too. He briefly explains the World Wide Web and how his team is working on a form of data compression that will allow people to share images. “Imagine you can talk to someone on a screen, like a phone call, but with video,” he muses, and she is captivated.

We watch the Pearsons use the fruits of Nasir’s research with abandon later in the episode, and title cards at the end of the hour inform us that: “In the early 1970s, Nasir Ahmed led a team of researchers who developed the Discrete Cosine Transform. This technique is still used by companies as part of their image and video sharing technology. You don’t know his name, but Nasir and his team are responsible for keeping us connected today. He and his wife Esther recently celebrated their 56th anniversary.” And the show’s writers’ room video-chatted with the couple to hear their story. 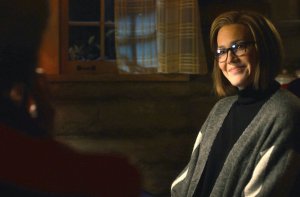 CABIN FEVER | At the cabin, Rebecca and Miguel eagerly await any word from Madison and/or Kate, both of whom are at hospitals and awaiting births. She keeps looking at a framed painting of colors all run together; when Miguel asks her about it, she remembers the time a pipe burst and soaked the kids’ artwork. She and Jack had been having a little bit of an argument: He was down on her for ragging on the kids so much, she countered that it was their only defense against having three teens in the house. Rebecca (much more gently than I would have) unearthed the real problem — Jack worried that the kids were growing up and growing apart from them faster and faster — and soothed her husband by pointing out that their family
is not ending anytime soon.” She showed him the blobs, adding, “We are all still there together, we are, even if it doesn’t look the way that it used to.” Then she promised him they would never miss a thing in their children’s lives, “especially not the big stuff.”

But by being stuck in the cabin while three of her grandchildren are born, Rebecca tells Miguel, she feels like she’s letting Jack down. He helps her feel better about it, and Rebecca acknowledges that they never talk about how he has to “bear Jack’s death differently for yourself, and for me, and for our marriage. Thank you. I know it’s a lot. I know I’m a lot.” He smiles, responding, “You’re just the right amount.”

DADDY’S HERE | Meanwhile, in Los Angeles, Madison has been on FaceTime with Randall and Beth for hours. The Pearsons are not going to stop overnight on their drive back to Philadelphia, so they’re happy to talk her through contractions and distract her from her epidural with embarrassing stories of drunk, nude Kevin and his love for the band Hanson. In fact, Randall is in the middle of a loopy, falsetto rendition of “MMMbop” when Kev himself walks into Madison’s room.

“I wanna hit you, but I also wanna kiss you,” Madison tells her fiancé as Beth and Randall hang up. We don’t really find out how he got there despite not having his ID — it’s implied that the airport’s head of TSA did him a favor — but Kevin wants Mads to know this: “Before I left, you asked me how this family was going to fit into my life… This family is my life,” he says, adding that he quit the movie. “This is all I’ll ever need.”

At another California hospital, Ellie’s labor is progressing slowly. But she uses the time to make sure that the entire nursing staff knows that after the baby is born, Kate should be the first person to hold her. Due to COVID-19 regulations, Toby is tailgating in the parking lot and getting updates via phone from Kate, who’s in the birthing room with the surrogate mom. A grouchy old man pulls up and tells Tobes that he’s in his parking space. “Buddy, I’m just waiting for my daughter to be born,” he tells him. “And I’m waiting to find out if my wife is going to live or die,” the man shoots back. Chagrinned, Toby moves his car.

We learn that the man and his wife have been married for 55 years, but she was hit hard by the coronavirus and is on a ventilator inside. He comes every night and parks in Spot 157, because she’s superstitious, and that’s her favorite number. She also loves pigs, thanks to a New Year’s Eve spent in Salzburg, Austria*, on their honeymoon (apparently, it’s a thing there), so he has a ton of pig figurines on his dashboard to invoke good luck. “Figured I’d bring the whole bacon army out for this one,” he says. They also talk about how Toby has middle-name rights for their imminent daughter. And when the old man says his wife’s name is Rose, I write in my notes, “18-minute mark THE NAME IS GOING TO BE ROSE, ISN’T IT?” Having softened considerably, when the man learns Ellie is pushing, he wipes down one of the pigs with an antibacterial wipe and tosses it to Toby to share a little of the luck. (*For my geographical mix-up, a sincere apology to Germans, Austrians and Sound of Music fans everywhere.) 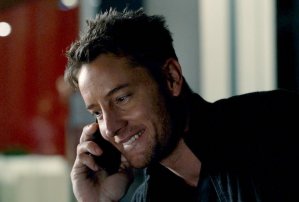 ‘THE NEW BIG THREE’ | Ellie and Madison labor. All of the babies — twins Nicholas and Fran for Kevin and Madison, Hailey Rose for Toby and Kate — are fine. But when Ellie’s child is out, the nurse goes to hand the baby to Kate, and Ellie stops her. She’s changed her mind and wants to hold the baby, and she also wants a moment alone with her. “This is it!” I think, smug in my things-can’t-possibly-ALL-work-out assuredness. Kate’s face looks like she fears that she’s losing her little girl, but what can she say? She agrees, and steps out.

But all a tearful Ellie wants to do is tell the girl that “Giving you to Toby and Kate is the hardest thing I’ve ever done, but it may just be the best thing I’ll ever do.” And then the nurse brings the baby to Kate, who video-calls Toby. “Meet your daughter, Hailey,” she says. “Hi there, Hailey Rose,” he coos.

Then there’s a lot of FaceTiming, Skyping, what have you. The babies meet each other. They meet Rebecca and Miguel. Uncle Nicky is shocked to learn Kevin named his son after him. (By the way, Franny is named after Madison’s grandmother.) And finally, Kevin and Randall have a moment to acknowledge everything that’s gone down between them in the previous months.

They admit they said terrible things to each other, and “we’ve got a lot of ground to cover” regarding what Kevin didn’t know about Randall’s experience of growing up in the Pearson house. But Kevin tells his brother, “You’re the best person I know,” and then Randall graciously says they can talk about the tougher stuff on a day when one of them didn’t bring new life into the world. After all, “Now is the time to celebrate with your new family.” (Side note: A really nice scene between Sterling K. Brown and Justin Hartley, there.)

Oh, and Rose? She’s OK! She video-calls her husband and tells him she’s going to get out of the hospital soon. See what I mean? LITERALLY EVERYONE IS HUNKY-DORY, AND I DON’T KNOW WHAT TO DO WITH THIS ANXIETY ABOUT IT.

Anyway, now it’s your turn. What did you think of the episode? Sound off in the comments!