Rumors of Rick Legarski’s death may have been greatly exaggerated the first time around (including, oops!, by us. Who knew someone could survive a bullet to the brain at super-close range?!). But in Tuesday’s Big Sky, the Montana state trooper met his definite end when wife Merilee cleaved in his skull with a hammer.

Merilee had been pushed to the edge by her husband’s role in a sex-trafficking ring and a series of murders, as well as by her nagging feeling that he was faking the brain damage that could keep him out of prison. So as Cassie, Jenny and the sheriff’s office swarmed Ronald’s house (yet didn’t catch Legarski’s wily accomplice), Merilee arrived at her husband’s hospital room brandishing the hammer with which he’d nearly killed her a few episodes before.

“Does this jog your memory at all?” she asked, citing several clues (his mention of her menopause, his singing of particular songs) as evidence that he remembered far more than he let on. And when he continued to claim obliviousness, she wielded the hammer with fury, leaving his head a bloody mess on the hospital bed’s pillow. 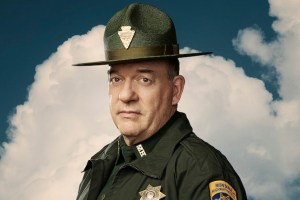 “Television, in most narratives, is not a moral universe in which we’re willing to have people like [Rick] walk away,” series star John Carroll Lynch, who plays Rick, told TVLine on the phone Tuesday morning. Therefore, he added, he’s wholly on board with the state trooper’s exit — and especially with the person who sent him on his way.

Read on for more of Lynch’s thoughts on the most recent episode, including where he falls in the “Was Rick faking his memory loss?” debate.

TVLINE | The last time that we chatted, I was like, “Legarski’s a goner.” You faked me out!
Good! Thank you.

TVLINE | But now it seems as though the curtain actually has fallen on his final act.
I have a feeling there will be no more flashbacks. [Laughs]

TVLINE | I’m going to ask my questions in no logical order, starting with: Please tell me that you are in possession of that giant cardboard cutout of yourself?
I’m absolutely not in possession of the giant cardboard cutout. However, it would be fantastically helpful in HOV lanes because then, not only would you have a second person in the car, it would be a state trooper. No one would stop you!

TVLINE | In this episode, we saw a glimpse of the happier times with Rick and Merilee, which we didn’t get a lot of in the present-day storyline. Tell me about shooting that.
Brooke [Smith, who plays Merilee] and I talked about this yesterday… It really is a love affair, all the way through the hammer, in both of our opinions. Love doesn’t always turn out the way you want it to. But at the beginning, you’re in earnest understanding that this could work. And then slowly over time, these two people grew apart in a really deeply fundamental way. And they just didn’t share values. But who would, with Rick Legarski? [Laughs] That’s a tough road for anybody to share values with Legarski.

It was lovely to play those scenes with Brooke. It’s so great in the writing. When you’re writing a revenge story, which essentially this will be, it’s like: Who’s the person who the audience is going to get the most emotional satisfaction out of dispatching this absolutely odious, hideous person? And there’s a long line of people who would’ve been emotionally satisfying to get rid of Rick Legarski, but none more satisfying than Merilee, in my opinion. She deserves it. She’s earned that. In a psychic way, and I think Brooke did a really lovely job playing it. 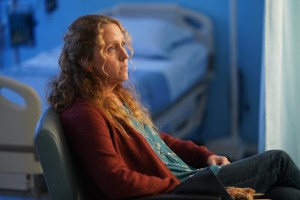 TVLINE | I love that Rick took a lie-detector test and passed it with flying colors. No one seemed able to pin down whether or not he was lying. But Merilee knew.
Did she though? Did she know? Was he faking it?

TVLINE | I was convinced he was faking it, because I’m convinced Rick Legarski is the devil.
I like the fact that you don’t know whether or not he truly remembers. You’re never given that out. But there are clues in it. The words he uses are words that — the menopause thing is the wrong answer everyday, but particularly on that day. [Laughs]

TVLINE | I loved the idea who had not been at the center of his thinking for quite some time was still observing him and knew him so well — I love the idea that he could fool a lie detector but maybe not the woman who’d been with him for such a long time.
I also think it’s nice, it’s much more emotionally satisfying that a woman who had been played for a fool by the two men at the center of the crime won’t be fooled again. And whether or not he’s in earnest that he doesn’t remember or not, she makes it clear that she won’t be fooled again. [Laughs] Not by that guy.

TVLINE | Did you know from the start that this would be the end for him?
No. Under no circumstance. I didn’t know in Episode 8 that would be it for him. No idea. I think I sent a two-word email to [executive producers] Ross [Fineman] and Matt [Gross] and David [E. Kelley]: “Perfect. Just perfect.” It was a perfect way for him to go. And her saying, “The idea of you getting out of this? I just can’t deal with.” I think she speaks for America when she says that. The idea of Rick Legarski getting away with it is too much.

TVLINE | Please give me the pluses and minuses of playing a character who spent his last several episodes in a bed.
Well the plus is you always know what you’re wearing. That was true of Rick Legarski throughout: He basically had two uniforms. Also… there were moments where I was asleep that I was asleep. [Laughs]… But that’s pretty much it. You’re laying down all day. You’re getting paid for that. Ridiculous.

TVLINE | His secret room has still not been found. The sheriff’s department couldn’t quite locate it.
Yeah, they’ve got some ‘splainin’ to do. I mean, he was really good. For all the hatefulness, you’ve gotta give Rick Legarski credit: That guy could lie. He was a very good liar. For years. And it must’ve been based on some level of truth. You don’t fool people for that long without it starting out as something, the description of him being Dudley Do-Right is accurate. Something went terribly, terribly wrong. And it’s very evocative of recent history. Like, how did we get here? How did this person get to the choices that he made? It seems heartbreaking, in a way, that he did. But he did. And people do.