John Carroll Lynch‘s Officer Rick Legarski was a cocky, taunting son-of-a-gun right up until the end of Tuesday’s Big Sky fall finale… when he goaded Cassie Dewell into shooting him in the head.

The hour opened with Legarski having visions of driving a hammer into his wife, Merilee’s, skull for daring to dance with another man. But he thought better of it, later announcing to Ronald that after the Canadians picked up Jerrie, Grace and Dani that day, he was going to get out of the sex-trafficking business for good.

He was also half a step ahead of Cassie and Jenny, having moved the kidnapped women just before the duo got the sheriff’s forces to descend upon the Building of Land Management property. With the trio now tied up in the basement of the All In Bar, Cassie eventually realized that that might be where Rick was holding them. When she found him there with the women, they both pulled their weapons. And though her hands shook and Legarski mocked her for her inability to pull the trigger at first, Cassie eventually squeezed off a shot that lodged itself in Rick’s skull.

So that’s the first thing we discussed with Lynch when we got him on the phone Tuesday.

TVLINE | Being shot in the head is not really something people bounce back from. Are you allowed to say whether or not he’s a goner?
Am I allowed to say? I don’t know. I will say that whatever happens is appropriate for this character.

TVLINE | Rick mentions throughout this episode that he’s unraveling a bit. Do you think that the events of this episode would’ve gone differently if he hadn’t been feeling like it was all falling apart?
One of the things that I’ve been really excited about is exploring the decisions of someone who is not capable of compartmentalizing his decisions. They have an effect on him, as opposed to someone who’s able to continue on without cost. This is an appropriate response to the cost of it all, you know what I mean? Rick Legarski in his prime would never have been a sex trafficker. We have to believe that, at some point, he was what everybody thought he was. And then something happened to him. He took the power into his own hands, made his own decisions. So this is what appropriately happens to him in the course of that. Karma’s a bitch, you know what I mean? A pain in the ass. 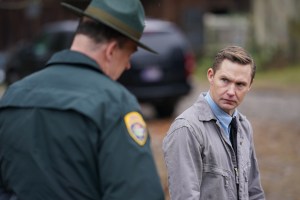 TVLINE | You bring up that Rick wasn’t always the way he is now. We saw Rick recruit Ronald, but do you know how Rick was recruited? Or might that be something that we see in the season as it moves forward?
For me, I’m not sure what will unfold in the remainder of the season, if you’ll find out that or not. I don’t know. For me, the character was watching his corner of Montana fall apart. He was watching the growth of a lot of things that weren’t supposed to be there: methamphetamines, poverty and other things. He made a decision that he can’t clean it all up, but he could handle basically exporting, in his mind, the problem of sex workers in his little area. The choices he made around it obviously had more to do with his misogyny and his sense of entitlement with the law. And anyone who takes the law into their own hands eventually makes those kinds of mistakes, and these were doozies.

TVLINE | Merilee’s confession that she’d danced with another man hit Rick harder than I would’ve expected it to. Do you think he thought it would’ve hit him that hard?
No. I think he’s surprised at how much he cares. Not that he didn’t think he cared, but he is surprised at how deeply wounded he is by the betrayal. And for him, it is a betrayal. It is nothing in comparison to what he’s doing. [Laughs] In terms of betrayals, it’s nothing like the betrayal he’s already participating in: in keeping this horrific thing from her, in engaging in it in the first place, in creating a circumstance in which her life and reputation are forfeit. I don’t think he thinks in those terms; again, all of it’s very selfish. I think he’s quite surprised by how deeply he feels for her. In his mind, if he can just finish this thing out, he can find redemption again. But, you know, Cassie Dewell has other plans.

TVLINE | Whenever anybody holds a very strong ideology, there are always loopholes.
Yes.

TVLINE | You can always find loopholes for something you want to do, or to forgive something someone you love has done.
That’s right. 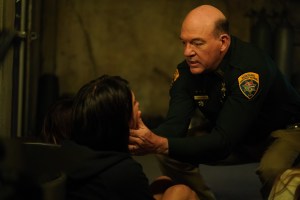 TVLINE | So when he’s recruiting Ronald, all I could think of was, “The problem is not the sex workers. The problem is men like Ronald.”
Yes. Let’s figure out who to blame: Let’s blame the woman who’s desperate. He’s obviously blaming the wrong person. This is going to sound really… I watched this amazing TED Talk between this woman and this man. They have a co-TED Talk about the night he committed date rape on her in high school. He was a transfer student from Australia in Iceland, and they have a conversation… about that evening. She says something that I think is an important thing, and certainly true and obvious: The problem of rape, the problem of sex trafficking, is not a woman’s problem, it’s a man’s problem. The way in which we’re socializing men is clearly incorrect. You know that phrase “She’s an occasion to sin,” which is a line that I came up with [Laughs], which is what the Jesuits told me about sex when I was in high school — that the circumstances are “an occasion to sin.” And they were talking about the circumstances; I don’t think they were intending to say that women were an occasion to sin. But for a 14-year-old, 15-year-old boy? That’s how he’s going to interpret it. ‘Cause he’s not the problem. And I don’t think Rick ever got over that mentality. I don’t think Rick ever got over that “I’m supposed to be dominant, I’m supposed to be in charge, I’m supposed to make the decisions, I’m supposed to care in the way that I care for people, and it’s all about me.” And clearly, it is!

TVLINE | I don’t know what your personal political preferences are, and it doesn’t really matter for the purposes of this question. But Big Sky was made during the year of a highly polarizing presidential election, and Rick really does stand for a lot of the things that the far Right stood for. I don’t think he ever says the phrase “Make America great again,” but it definitely could have come out of his mouth very easily. How much was what was going on in America’s politics come to mind when you were playing him?
I really do feel like the people who write television and create television often live in a bubble away from people who live lives outside of that bubble but have nothing to do with that. We’re trying to create a world that, especially when the show takes place in Montana — I don’t know how many of the writers have been to Montana. I certainly have not been. I based my understanding of the character based on my own experience of living in Colorado, growing up in Colorado which at the time I grew up was a decidedly Red state. It wasn’t the pot-legalized, larger version of Seattle that it is now. But what I had in my mind mostly was trying to figure out the way in which the world looks from the perspective of this person at this moment. And not as a reflection of — I hope — not as a reflection of what people in a bubble inside an industry are saying that he’s saying, if that makes any sense.

I was really sensitive to the idea of “This sounds like somebody from the outside looking in, not from the inside looking out.” I hope that I reached some level of “inside looking out,” in this deluded, horrible person. This is not the ethos of someone who is earnestly involved in, let’s assume there are people in the world that are trying to make America great again the way they believe it needs to be. I think Rick is that person, [but] he’s just crazy. These decisions are not rational decisions. They’re impulsive and they’re inappropriate and, in some ways, sad — especially when he has a reputation, he has a standing in the community, he has a wife who could potentially love him, and all of that he puts at risk for this behavior, and he doesn’t realize it until it’s too late. And in that way, it’s sad. But he’s responsible. And that responsibility comes to roost in this episode. 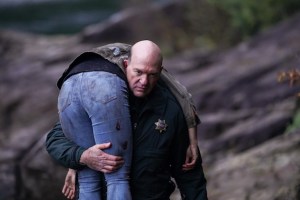 TVLINE | I want to leave you on a slightly lighter note: When I spoke with Jade Pettyjohn, she told me that was actually you carrying her around during the episode where Grace escapes. And so much of Rick’s dialogue capitalized on your stature. So I guess I’m asking: Is your back OK?
My back is fine. [Laughs] I have to say: One time I made a movie, actually here in Vancouver, called Love Happens. There was a shot of me getting off of a tour bus and going into a Home Depot with a bunch of people, as part of a grief seminar thing. It’s a long story. But anyway, the shot was beautiful. It was a rising crane shot on the Home Depot with everybody walking into the store. And I had a cart. When I did the shot, it seemed perfectly rational and reasonable that all of us as grief people would be going in there. And then when I saw the shot, I was like, “Why is that adult going into a store with 40 children?” I often forget how large I am in comparison to other people. [Laughs] And Jade is decidedly a petite person. So I look even more like a different species when I’m carrying her around. That’s just true.

TVLINE | I have never looked at you on screen and thought, “Wow, what a giant. How did they ever fit that man in the frame?!”
Well, when you look at my work again, and you notice that most of the time, there are no over-the-shoulder shots to my scene partner. They’re always across-the-arm shots, because if they did over-the-shoulder shots, everyone would look like they were 3 ft. tall. Actually, one of the directors of this show was like, “Let’s bring the camera down. I don’t want to diminish the other characters.” [Laughs] But it was like, why did you even try an over-the-shoulder shot? It always looks like I’m loomng! Basically, when I’m looking at a script, if I don’t know who I’m going to be reading for or looking at, I often look for the word “lumber,” and likely that’s the character I’ll be reading for.

Now it’s your turn. Grade the episode via the poll below, then hit the comments!