In Chicago P.D.‘s Season 6 finale,“Reckoning,” Voight declared his faith in Halstead as Intelligence’s future leader: “This unit is gonna be yours one day… Do it the right way,” he told the young detective. Those words took on a powerful new meaning in this week’s installment, titled “Equal Justice,” as Halstead was forced to make a difficult choice that put his idea of what’s right into question.

The episode saw Intelligence encounter a grieving Black father who went undercover as a drug dealer in an effort to solve his son’s murder. Lattrell, who wasn’t a cop, took to the streets since the homicide detectives assigned to his son Sean’s case failed to adequately investigate the unsolved crime. By committing a felony for drug dealing, Lattrell faced serious jail time unless he worked with Intelligence to take down the big-time drug dealer he’d been working with. It was an emotional outing for Halstead, who was both frustrated with homicide’s flagrant negligence — they brushed off Sean’s death as another gang shooting, despite Sean’s innocence — and moved by Lattrell’s devotion to his son. Intelligence eventually identified Sean’s killer, but not before an unknown assailant opened fire on their prime suspect. 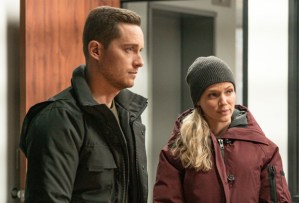 It didn’t take long for Halstead to figure out that Lattrell had finally avenged Sean’s death, and that realization left him with a serious moral dilemma: Does he turn in the guy that, by all means, was a good person who couldn’t see past his desperate need for closure? And if the cops had done their job in the first place, Lattrell wouldn’t even be in this situation. It’s also clear that Halstead felt partially responsible for Lattrell, since he unknowingly gave Lattrell an important clue that led him straight to Sean’s killer. In a moving conversation with Voight, the police sergeant advised Halstead to make a choice that he can live with for the rest of his life. (Someone’s definitely speaking from personal experience.)

For Halstead, the right choice was to help this man who’d been let down by an imperfect system. While arresting Lattrell, he ordered the distressed father to keep his mouth shut and hire an attorney — all but confirming that he wouldn’t turn in key evidence that linked Lattrell to the second murder. In doing so, this raises an important question about Halstead’s character and the type of leader he’ll eventually become. Is he going down the same path as Voight? Throughout the series, Halstead has proven to be a far different cop than Voight and usually plays by the rules, no matter the cost. In Season 7, he went after Deputy Superintendent Kate Brennan for killing Kelton, despite his suspicion that Voight might have been involved in covering up the murder.

The episode ended with the striking image of an upset Voight looking on as Halstead and Upton arrest Lattrell, bringing on a new set of questions. Was he lamenting Halstead’s decision to virtually follow in his footsteps? Or was this the picture of a grieving father who could relate to Lattrell’s situation? As you’ll recall, Voight also killed his son’s murderer back in Season 3 — a decision that’s heavily weighed on him in the time since. If we’re going by the Intelligence leader’s pained expression at the end of a harrowing hour, this case definitely hit way too close to home.

What do you think, #OneChicago fam? Is Jay becoming more like Voight? Sound off in the comments below!