The Intelligence unit is officially down not one but two members after Chicago P.D.‘s season finale on Wednesday night — and it might have new leadership! With the heat on Ruzek as Internal Affairs takes over the investigation into the incident earlier this season, Antonio is at a crossroads in star Jon Seda’s final episode.

IA wants Ruzek to amend his original statement and give up Antonio and Voight, but he refuses to do so. Meanwhile, Antonio reaches out to a contact to try to get dirt on the IAD detective. Unfortunately, all they come up with is that his daughter is prostituting herself, something which Antonio doesn’t feel comfortable using. Considering how far Ruzek is going to protect him, Antonio can’t help asking why, especially since they don’t even like each other very much.

Ruzek explains that he only had one choice that would let him stay true to himself — and that choice lands him in custody as the episode draws to a close. While Ruzek is being booked, Antonio sits in his car and takes a pill, which we’re guessing is not just a Tylenol. As far as character endings go, it’s not quite a period on his story, but more of a “dot dot dot” situation (which can be more neatly tied up than what happened with Connor and Ava on Chicago Med). 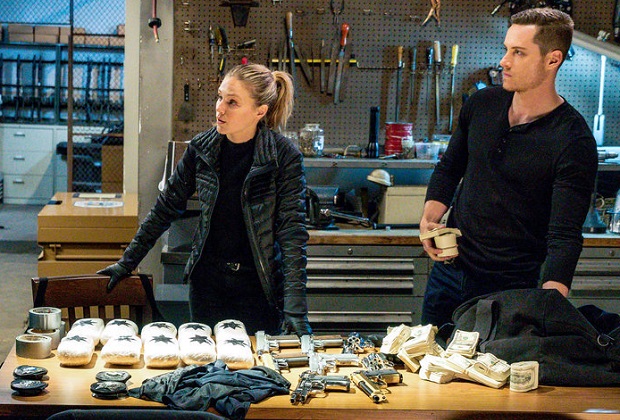 Meanwhile, Voight tells Halstead that he’s going to see Kelton, who’s won the mayoral election. Then he ominously says that the unit is one day going to be Halstead’s, and he should “do it the right way.” Halstead seems unsettled by this as he recounts the exchange to Upton, who notes that Kelton’s day of reckoning is coming. However, it’s not coming soon enough for the unit, Halstead argues. Earlier in the hour, he told her that if things didn’t work out with their plan to stop Kelton, he was going to follow her to whatever department she moves to. “It’s hard to find a good partner,” he added. Now, Upton responds with, “You’ll forget about me just fine,” and Halstead clearly wants to say something back but can’t find the words.

As for Kelton, he’s found shot dead in his home as Voight drives away in his car. So it looks like Halstead may have control of the unit sooner than he expected.

What did you think of the season ender? Grade it via the poll below, then hit the comments!