It was not so much any grand plan but a bit of online shopping that led Kaley Cuoco to the project that would net the Big Bang alum her first-ever Golden Globe nominations — plural, as both an actress and as an executive producer.

As Cuoco winningly detailed in a THR TV’s Top 5 podcast, years ago she was up late browsing for a new read when Chris Bohjalian’s The Flight Attendant caught her eye. “The cover was a woman with blonde hair, and she was running…. It was a very wispy, cool cover,” she shared.

Nearing what would be the end of Big Bang‘s run, Cuoco was being nudged to consider her “next act.” And after reading the thriller’s cover flap, she jumped to option the rights for what would be the first series from her production company Yes, Norman (named after the canine companion she heartbreakingly said goodbye to just weeks ago, after 14 years).

Not 24 hours after Cuoco’s Globes nods were announced (watch her emotional reaction here), the SAG Awards nominated her for Best Comedy Actress and the show for Best Comedy Ensemble. And somewhere in between it all, she hopped on the phone with TVLine to react to The Flight Attendant‘s clearly successful landing.

TVLINE | You have had a very emotional 2021 so far.
Yes. So many ups and downs…. This is definitely an up moment, for sure.

TVLINE | Who’s more excited, Kaley the Actress or Kaley the Executive Producer? Or are they taking turns?
Oh man…. You know, maybe Kaley the Actress, because I’ve been doing this for 30 years. Like, I’ve done it for so long and love being an actor so much, I don’t think of moments like this. And so I’ll never forget this moment. Like, I really won’t. I’m so bursting at the seams.

TVLINE | When you’re developing The Flight Attendant, and when you’re shooting it, obviously you want it to be very good, you want it to be high-quality…. But does it ever slip into your mind, “This could be award-worthy”?
No. If we started thinking that, that would be a problem. All that went through my mind for the past three-and-a-half years since I optioned this book is, “Oh my God, am I making a mistake? Are people going to hate this? Are they going to love it? Oh God, this is so bad, what am I doing? Why am I doing this?”

Being an EP now, you just know way too much, you see all the struggle. As an actor, I get to wake up and walk in, you do your job and then you leave, and you see the end product. But learning the road to the end product, it actually makes this even sweeter, because you know how hard the work is, and how much of a huge team effort it takes.

TVLINE | And all for a property that you bought based on the cover while online shopping one night!
[Laughs] That is very true, yes. I saw the cover of the book, and I read one sentence on Amazon. I then went through the option process for six months while I was reading it, and it was crazy. But I just loved Cassie, and I knew this could be a good show. I remember walking into the studio and saying, “I think this is the next show, but we’ve got to do it right. It’s international, and we can’t do this on a soundstage.” They go, “OK, but it’s going to be expensive,” and I was like, “Yes. Yes, it is.” And then I thought, “Oh God, they’re not going to make this thing. We can’t go around the world, like, what am I thinking?” But they did. 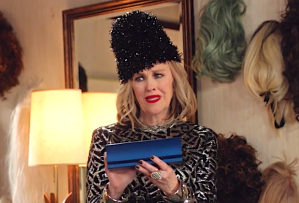 TVLINE | You watch some TV. Are you familiar at all with any of your competitors in the comedy and comedy actress categories?
Yes, and I actually have a story. So, Catherine O’Hara is one of my favorite actresses ever, and I had not heard of Schitt’s Creek until maybe two years ago, when I was in Thailand shooting Flight Attendant. That was a great experience but it was rough, long hours, in a place I didn’t know, and I said to someone, “I’ve got to get into a new show, I need something to distract me.” They said, “Why don’t you watch Schitt’s Creek?”

I started watching Schitt’s Creek on set, in between takes, and I would literally walk around and talk to everyone like Moira, trying to do her voice. And they’d be like, “Oh God — Kaley’s engrossed in Schitt’s Creek. This is going to be a thing,” because I would, like, become Moira and just be this crazy person. [Laughs] Her scenes got me through shooting my show. So to be in this category with Catherine is something I wouldn’t have ever even dreamed of. I feel extremely honored. 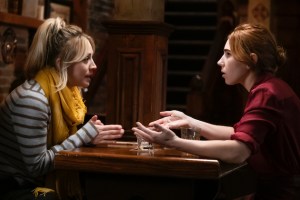 TVLINE | A few of our readers were surprised to see Flight Attendant competing as a comedy….
Well, [the show] is funny. I mean, I feel that we created a tone that you don’t see very often —  it wasn’t a drama, it wasn’t a comedy, it wasn’t sad, it wasn’t happy. It was such a range of stuff, and to be able to make you laugh through some horrors that we shot, I feel that’s why it was a comedy. There were moments that were lighthearted, really crazy comedic moments that we felt were very, very special, and that it lent itself to comedy.

TVLINE | Flight Attendant was Yes, Norman’s first big swing. How does this shape what you decide to pursue next as a production company?
I mean, this was literally our first swing. Yes, Norman came about after I optioned this book, and kind of was based around what this project would be. Also, coming off Big Bang, I got asked a lot, “Were you trying to find something that was so different than Penny?,” blah, blah, blah. The truth is — and I really mean this — I wasn’t. I wasn’t looking for something that was so opposite Big Bang. I didn’t care. I loved being part of Big Bang, but I like to go by my gut, and there was something about this that was very gut-driven, and that is how we work at Yes, Norman. We’re not searching for anything specific. If it hits us in the right spot, and it’s with the right people, then we want to do it. 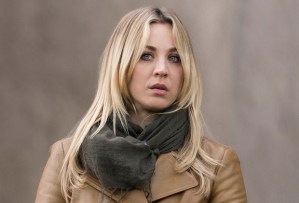 TVLINE | Which is how alcoholism is.
Absolutely, but she wants things to be easy and quick, and she is going to realize really fast that this will not happen overnight. 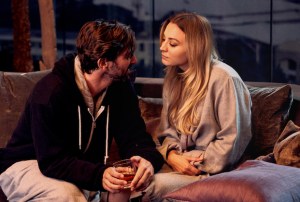 TVLINE | [Showrunner] Steve Yockey told me that there will be a “mind palace” device again, but it’ll obviously be different.
We will, yes. I don’t exactly know how they’re going to do it, but we’ve definitely confirmed that. I think there’s going to be a little bit of Cassie almost in her own mind, if that makes sense, her kind of talking to herself and facing her own demons truly head-on again.

TVLINE | I’m frankly worried for Rosie Perez’s character. Given her storyline, it’d be easy to kill her off and then she is with Cassie in a new mind palace.
We need to find Rosie’s character — Megan became such a fan favorite — and that will be a really big storyline. We’re excited to see where that goes.

TVLINE | Lastly, what are your wants for Season 2? Or, is there anything you’ll be mindful to not do?
What are my wants? You know, it’s so early to know…. We had such a great Season 1, but I want it to even be better, even though that’s hard to do. And I want to come out swinging. What I appreciate with the show, with Steve and our writers, is they really let me go ballistic. I mean, you saw it on-screen. I would like to go ballistic again and keep spreading my wings, because it just became its own entity and I don’t even know what I did half the time. I kind of just left it on the field and walked away, like, “Well, f–k, I hope that worked!”

Want scoop on Flight Attendant, or for any other show? Email InsideLine@tvline.com and your question may be answered via Matt’s Inside Line.