What does The Walking Dead have planned for Maggie?! Is WandaVision preparing for a super spat? Which Chicago Med character is due for an examination? Read on for answers to those questions plus teases from other shows!

What can you tell me about The Walking Dead’s bonus episodes? —Jud
Our resident Deadhead, Charlie Mason — having seen the first of Season 10’s half-dozen add-ons (premiering Sunday, Feb. 28) — tells me that the AMC series upends expectations by doing something with Maggie and Negan that’s arguably more chilling than letting Glenn’s widow and his killer immediately clash. The first new episode, “Home Sweet Home,” also introduces a new threat (’cause those woods are lousy with ’em!) and forges from heartache a new connection between Kelly and… Well, that, you’ll have to wait and see.

Now that we have some idea of what is really going on, will WandaVision show us how Wanda’s alternate “sitcom” world all started? — D.L.
Meaning, will we “rewind”/flash back, as Episode 4 did with Monica? “I can’t speak to the specific structural stuff,” head writer Jac Schaeffer told us, “but we will continue to surprise with the linear and nonlinear storytelling.”

WandaVision‘s Vision seems to now suspect something is wrong, and in the new promo it even looks like he and Wanda will fight. Or could that be a fake-out? — Cliff
After Wanda first lied to Vision about Geraldine, we asked Paul Bettany a version of your question — is the pair’s picture-perfect life about to go poof? After warning us he was about to “answer in a bleak fashion,” Bettany said, “It’s interesting to look at the American century through the prism of which sitcoms were out. You start off with Dick Van Dyke, where there’s real warmth to that relationship. By Bewitched, you’ve got a man whose wife is incredibly powerful, and yet he’s embarrassed by how powerful she is. Then you get to The Brady Bunch where everyone’s pretending there’s nothing wrong in the world, meanwhile you’ve got this huge civil rights struggle and the Vietnam War.” The 1980s then brought “Family Ties and teachable moments,” followed by the “very cynical and cool time of Malcolm in the Middle and Modern Family,” Bettany observed, building to the point he wanted to make: “[In those shows], couples aren’t necessarily that fond of each other. And that fact serves our purpose in this show very well.” 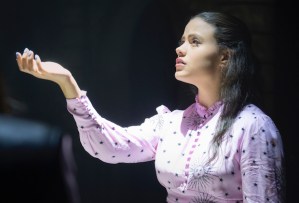 Anything you can tell us about Charmed? — Amanda
The season resumes Sunday, Feb. 14 with what was supposed to be last season’s finale, and Sarah Jeffery (aka Maggie) promises that the “greatest sacrifice” being teased in promos is not an exaggeration. “It’s the ultimate emotional sacrifice,” she teases. “It makes me emotional even thinking about it. Without spoiling, it all comes back to the sisters and their love for one another and what they’re willing to do for one another. That’s who they are.”

When will All Rise viewers get to meet Sherri’s new guy? I have a mutual who thinks it’s Bravo! –Aurora
“’Bravo’ for clocking that. I’m on pins and needles, too!” answers Ruthie Ann Miles, who plays Sherri. Alas, it seems everyone will have to exhibit some patience. “I don’t think the audience will get to meet him until Lola has given Sherri the ‘thumbs up’ on him. That being said, what’s the hold up?!” asks Miles. “I think Sherri is still stuck on Detective Harris, and it will be a strain in her relationship.”

I know the new season of MasterChef had to stop production because of the pandemic, but what happened to MasterChef Junior? I could’ve sworn they had a new season in the can. –Shari
Seems you answered your own question there! Season 8 of Masterchef Junior is in fact in the can, but a premiere date has not yet been set. 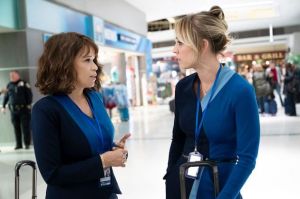 Any scoop yet on Flight Attendant Season 2? —Deborah
In addition to sexy international destinations, the HBO Max hit’s sophomore itinerary might include regular stops in the City of Angels, and fewer bites of the Big Apple. Whereas Cassie’s Season 1 home base was New York, “I’d actually like for some of [Season 2] to be in L.A. So I pitched that,” West Coast-based star and EP Kaley Cuoco told me after netting her first-ever Globe nod. “I don’t know if they’re going to go for it, but I’d like some of it to be in L.A.”

We just saw the talented Frances Fisher play John Nolan’s mom on The Rookie. Will we see her again? Also, will we see Ben again? Or his son? –Laura
I will choose what’s behind Door No. 2 and confirm that yes, we will see college pal Ben (played by Currie Graham) again later this season. 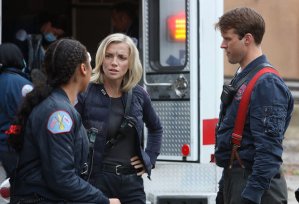 Since NBC renewed Chicago Fire through Season 11, will we ever get to see Sylvie be promoted to an Ambulance Commander, since that is the next rank above Paramedic in Charge? She certainly deserves it! –Bonnie
“Maybe!” was showrunner Derek Haas’ short answer when we delivered your Q. “Honestly, that has not yet come up. It’s kind of like, [‘Let’s handle] one promotion at a time on the show,’ and we’re a little focused on whether or not Stella will make lieutenant this year. But [Ambulance Commander Sylvie] is a cool thought.”

Since Chicago Fire‘s Boden is cheering Kidd on to take the Lieutenant Exam, is there a promotion in his future? –Cheryl
“I think Boden’s pretty happy where he is,” says showrunner Derek Haas. “He ran for commissioner a few years back, and that didn’t work out so well. I think he really does enjoy being a battalion chief, and as deputy district chief you’re more administrative and less out doing the calls and living in the firehouse and those kind of things. So I think Boden wants to stay, and gets a lot of his energy off of being close to his men.” 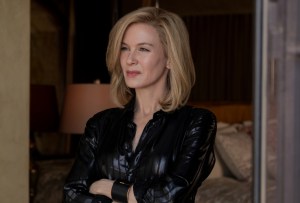 Any idea when What/If will be back on Netflix? –Nicole
What/If‘s fate is definitely more if than what. Though Mike Kelley had told us there was a theoretical plan for the future, I am hearing that Netflix is no longer envisioning addition seasons of the anthology series, which counted Renée Zellweger, Jane Levy and Blake Jenner among its inaugural cast.

Any update on when Ali Wong will be back on set on American Housewife? I’m guessing she’s filming the Zoom call scenes that she’s in on the East Coast, while the show films on the West…. –Martin
I wouldn’t count on Doris resurfacing in person, seeing I am told that Wong already finished filming her episodes for the season.

Any Chicago Med scoop about anything but Manstead or Chexton? — Lovanne
Well, executive producer Andrew Schneider told us that through the story with foster son Auggie, “we’re going to learn more about Maggie’s (Marlyne Barrett) past. We’re going to sort of peel back the onion on who Maggie Lockwood is and what’s driven her.” To that end, EP Diane Frolov adds, “We have an episode where Maggie has a couple scenes with Dr. Charles, which we have never seen before.”

If you want the Inside Line on a favorite show, email InsideLine@tvline.com! Questions left in Comments will not be read and may count against your final score. (With additional reporting by Vlada Gelman, Keisha Hatchett and Rebecca Iannucci)