A mother’s work is done.

Tuesday’s Big Sky handed out several shockers, including Rick Legarski’s return to consciousness and the moment Cassie and Jenny identified Ronald as Legarski’s sex-trafficking accomplice. But none were as abrupt or lethal as the moment that an angry Ronald snapped his mother’s neck, killing her.

Yep, the sanctimonious, screwy Helen Pergman is no longer among the living. But we couldn’t let her go without hopping on the phone with her portrayer, the delightful Valerie Mahaffey, to rehash Helen’s last episode. Read on as the Emmy-winning actress — whose long TV resumé includes Desperate Housewives and Northern Exposure and who next can be seen in the film French Exit — lets us in on the scene she and co-star Brian Gerraghty fought to have included in the series. (Trust us, you’ll remember it.)

TVLINE | Were you privy to Helen’s whole arc when you signed on to the show?
No. I was sort of the last [series] regular invited to the party. [Executive producers] David Kelley and Ross Fineman called me and offered me this part. I got to read the pilot and the second episode, and it was very interesting. [Laughs] Her whole thing and her, what do we call this? “A really bad mother’s agenda gone awry.” I get all smart after the fact — I didn’t think this at the time. But I’m a mother, and I have realized that I think I’m not alone: Parents… have agendas to make their children perfect. I appreciated it, ultimately, when my daughter — who was a very good little girl, good, good, good, didn’t get all rebellious when people said she would. She was late to that party. But then she did start to rebel. And I realized that’s a good thing. I think kids should. And Helen, she just took this weak boy and kept stressing her idea of how to be in the world, and just warped the heck out of him. It’s not always completely the parents’ fault, there’s society in there, right? And nowadays, social media, which I just want to kill.

TVLINE | What I took away from the way Helen had this very neat home and a son who always wore a shirt and tie was that she took comfort in having things exactly the way she wanted them. Is that accurate?
I think that’s extremely accurate. There was a very religious component to it, a very strict adherence to things… When people find comfort in control of everything, something’s going to ooze out in the wrong way. I think that’s exactly what happened. When she looked at him, you’re right: He was dressed perfectly, and he seemed sort of OK. And? Not so much.

TVLINE | How much of the relationship between Ronald and Helen was straight from the page? Did you and Brian work out any back story or nuances on your own?
Obviously, some is on the page to begin with. I adore Brian. When I work with an actor that’s that passionate about what they’re doing, it ups my passion, too. And we were very adamant about certain things and lobbied for certain things… We evolved and we found things. There was very much a push-pull with who has the power in any given moment. And that was very interesting to explore… There was one time when I started laughing at him, and I think I saw a glimmer in his eyes of, “Oh, Valerie’s laughing.” But then it was no, it was Helen laughing at him. He kept going, to his credit, but that was different than I had played it in the previous three or four takes. I just started laughing at him. I’m not patting myself on the back, but those moments that happened are gold. 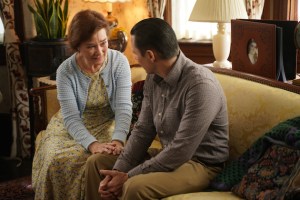 TVLINE | Yup. I remember that.
[Laughs] And then when he crawls into bed with me later, I think that was another one. But for a moment, that [first] scene went away. And Brian and I were both like, “No! Please keep that. Please put that back!” Because it really begins to inform that he’s not just a bad guy out of nowhere. And they put it back, to their credit. Because it’s really important, that we see why he’s not doing so well in the head.

TVLINE | Do you think Helen ever entertained the idea that Ronald would actually physically harm her?
Yeah. I think it became that way. At first, she was the power broker of the whole thing and could chastise him and make him slink away. In that very episode where he ultimately kills her, do you remember the scene where she goes to his truck? And he screams at her to get out? It was scary. She got it. And he throttled her a couple of episodes before that. So the tide was beginning to turn. Yeah, she was scared. Even watching it, I knew what was coming, and I was like, “Ooh, that’s terrible!”