When the snows fall and the white winds blow, the lone wolf dies… but the pack of Game of Thrones fans clamoring for a Dunk and Egg prequel series survive.

HBO reportedly is developing a Thrones prequel based on George R.R. Martin’s novellas about Dunk (aka Ser Duncan the Tall) and Egg (Aegon V Targaryen), per our sister site Variety. 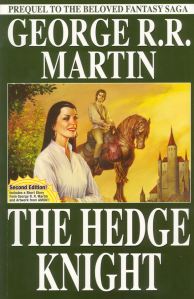 The events in the Dunk and Egg tales take place about a century before those of Martin’s A Song of Ice and Fire novels, which were the basis for HBO’s wildly popular fantasy drama.

Martin previously said there were no plans to use the novellas in question — The Hedge Knight, The Sworn Sword and The Mystery Knight — as the basis for a sequel series.

HBO currently is moving forward with House of the Dragon, which was co-created by Martin and Ryan J. Condal (Colony). Set 300 years before the original Thrones series, it will follow House Targaryen as it begins its storied downfall. Thrones director Miguel Sapochnik will serve as co-showrunner, alongside Condal.

In late 2019, HBO officially passed on its first post-Thrones spinoff, a pilot from Jane Goldman staring Naomi Watts (Twin Peaks). “The Jane Goldman one was a bit of a bigger swing because there was a lot more invention,” HBO president Casey Bloys told TVLine in January 2020. “House of the Dragon, George has text and history for that era, so there is a bit more of a road map.”

Thrones faithful: Would you watch a Dunk and Egg series? Hit the comments and let us know!