Prepare your finest china! Bridgerton is roaring back for Season 2, Netflix announced on Thursday.

The streamer confirmed the long-awaited renewal with a “letter” from the show’s infamous gossip-monger Lady Whistledown, which notes that production on Season 2 of the lush period drama — created by Chris Van Dusen and adapted from Julia Quinn’s bestselling novels — will get underway this spring. The letter also teases that “Lord Anthony Bridgerton intends to dominate the social season,” a hint that Season 2 will follow Book 2 of Quinn’s series, The Viscount Who Loved Me, which focuses on the romantic exploits of Jonathan Bailey’s bachelor character. (Get more Season 2 scoop from Van Dusen here.)

Just as Quinn’s books do, Bridgerton follows eight attractive and well-heeled siblings and their loving widowed mother, Viscountess Violet (Ruth Gemmell), as they lean on one another and seek romance and lives of their own. The Bridgertons’ plans — good, bad or ugly — are obsessively monitored and reported on by Lady Whistledown (voiced by Julie Andrews), the cloaked writer behind London’s voraciously consumed gossip rag. Viewers learned who she really is at the end of Season 1’s eight-episode run, but the nobles within this fictional 19th-century version of London remain none the wiser.

Season 1 was based on Book 1, The Duke and I, and followed the initially feigned and eventually fiery courtship, love affair and marriage between Daphne Bridgerton (Phoebe Dynevor, Younger) and the Duke of Hastings, Simon Basset (Rege-Jean Page).

But don’t just take our word for it. Feel free to read Whistledown’s scandal sheet thine self: 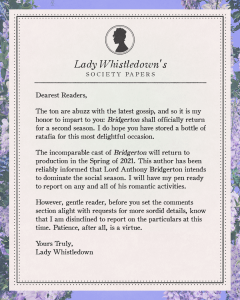 TVLine’s Streaming Scorecard has been updated to reflect the news. Bridgerton fans, hit the comments below and share your thoughts on the renewal.