The following post contains spoilers for Episode 2 of WandaVision. If you have yet to watch, avert your eyes!

Everything about WandaVision‘s old-school sitcom world is a little strange — including, apparently, the speed with which women develop baby bumps.

At the end of Episode 2, a decidedly non-pregnant Wanda gets up from her and Vision’s couch and heads to the kitchen, only to discover upon standing that she suddenly is pregnant, and her bump would indicate she’s a few months along.

And yet, despite the odd and speedy circumstances under which Wanda’s new development occurs, star Elizabeth Olsen asserts, “I don’t think we should worry” about how the pregnancy will play out, even as Wanda and Vision exist in a bizarre sitcom universe with ominous undertones.

“It’s as pure as we would like it to be,” Olsen tells TVLine. “It’s a really lovely thing that has happened.”

Adding to the puzzle, of course, is exactly what kind of baby Wanda might birth, given that she’s married to a powerful synthezoid. Per Olsen, the show will acknowledge that question in Episode 3 (dropping Friday, Jan. 22), though Wanda and Vision will be pleasantly intrigued, rather than concerned, about their potential offspring. 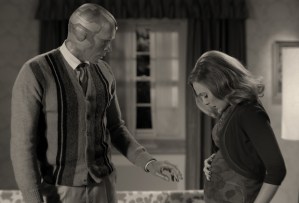 Aside from Wanda’s accelerated pregnancy, the Marvel series features plenty of other mysteries, including the question of Vision’s very existence (which star Paul Bettany says will be explained; the character previously died in Avengers: Infinity War) and a series of retro commercials that nod to other staples of the MCU (and Marvel Studios boss Kevin Feige confirms you should pay attention to those). The two-episode series premiere, which released on Friday (read recap), earned an average grade of “A-” from TVLine readers, with 95 percent saying they’ll stick around for Episode 3.