If last week’s This Is Us gave us the barest outline of what Randall’s mother was up to in the years after his birth, this week’s episode fills out the details of Laurel’s story in heartbreaking color.

Most of the hour, titled “Birth Mother,” consists of Hai telling Laurel’s story while Randall and Beth listen. Nearly all of the action takes place in New Orleans, where the Pearsons — as promised — travel in order to hear from the man who says he can explain why Randall never learned that his biological mother had survived the overdose he’d thought killed her.

The quick answer? Circumstance and shame. Read on as we elaborate while breaking down the major developments in this week’s episode. (And hear what Sterling K. Brown had to say about Randall’s epiphany here.) 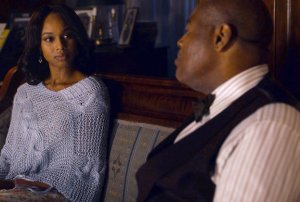 MEET LAUREL DUBOIS | Beth and Randall haven’t been at Hai’s house — no masks, though they quickly establish that everyone has quarantined and tested — for more than a minute when the older man drops his first bomb: The house was actually Laurel’s, which means it’s now Randall’s. They go inside, where they sit in the kitchen and Hai launches right into the story.

Laurel’s family was one of the most distinguished in New Orleans. Her father (played by Hawaii Five-0/Boston Public alum Chi McBride) was a banker. (Side note: And that’s The Bernie Mac Show‘s Kellita Smith as her mom — can we get another appreciative slow-clap for this show’s deep and secretive guest-casting bench?) Laurel had an older brother who was killed in the Vietnam War, when Laurel was a young woman. When her grief over his death became too much to bear, Laurel visited her Aunt Mae, who lived nearby.

Mae, Laurel’s father’s somewhat bohemian sister, lived nearby, grew vegetables to sell at a farmer’s market and generally seemed to be much less strict about everything than Laurel’s parents were. And when Laurel’s sadness threatened to overwhelm her, Mae counseled her that “God can take your pain, but you have to let it go.” So Laurel waded into the lake behind her aunt’s house and screamed out her feelings.

At that moment, Hai — a Vietnamese refugee who’d come to Louisiana with his parents after the war — was fishing nearby. Thinking Laurel was drowning, he leaped into the water to save her… which irked her to no end. “If I’m being honest, your mother was the love of my life,” Hai tells Randall, explaining that even though Laurel was dating a man named Marshall at the time, Hai and Laurel ran into each other at the farmer’s market after the lake incident and started hanging out. They eventually fell in love.

But when Laurel’s father strongly suggests she should accept Marshall’s imminent proposal, she runs — and asks Hai to come with her. He can’t leave his parents, and he knows that Laurel’s family will never accept him as her man. So she takes off for Pittsburgh, which is where the cheapest bus ticket takes her.

At this point, Randall is impatient. He wants to know what stopped Laurel from finding him. “Prison,” Hai says simply. Shall we continue? 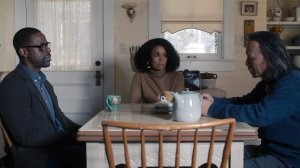 ‘SHE WAS PUNISHING HERSELF’ | After William runs with baby Randall and the EMTs are able to revive her, Laurel spends a few days in the hospital before she is arrested for drug possession. She and William don’t have a phone at the apartment, so her one call goes to her family’s home in New Orleans. And though her father picks up and realizes it’s her, she’s overcome and isn’t able to say anything to him.

Laurel’s lawyer counsels her to plead guilty, figuring the judge will show the young woman some mercy. Laurel’s lawyer is wrong. She is sentenced to five years in prison and ultimately relocated to a jail in California because of overcrowding.

“She said there wasn’t a single night that went by when she didn’t dream about you,” Hai tells Randall, who’s crying quietly. The older man continues: Laurel was released in 1985, returned to New Orleans and stayed with Aunt Mae. “I think she was punishing herself,” he says. “She felt she forfeited the right to be a mother.”

After Laurel tells her aunt everything, Mae (The Practice‘s LisaGay Hamilton) confesses that she got pregnant by a married man when she was young. “I lost them both, and it changed me,” she recalls. Laurel cries hard as she worries that “my son is going to grow up thinking I didn’t love him.” Once more, Mae tells her to let the guilt go “or it’ll strangle you.” So that night, Laurel slips into the lake in her nightgown and lets out a huge, painful scream.

HI AGAIN, HAI | When Hai and Laurel see each other at the farmer’s market after her return, they wave to each other across the square. But he’s married and about to be a dad, so they don’t have much of a relationship — “We had a few moments,” he says. “Small, but enough.” — in the intervening years. But decades later, when she doesn’t show up at the vegetable stand one day, he goes to her home and learns she’s got a cancerous and very aggressive tumor.

So he cooks for her. He cares for her. And he is there when she dies (which, thank goodness, for once this show didn’t feel the need to make us watch).

NIGHTSWIMMING DESERVES A QUIET NIGHT | That night, back at the hotel, Randall can’t sleep. So he drives to Laurel’s house, walks to the backyard, takes off his clothes and steps into the lake. When he’s submerged up to his neck, he hears a woman’s laugh. “My baby,” she says, and suddenly, older Laurel is in the water with him.

Poor Randall starts to cry. “I didn’t even know I was looking for you. Now I’ve found you, and you’re gone,” he tells her. She apologizes and gently tells him that he’s got to let all of his sadness and pain go. So he screams into the night, and it’s full of anguish and loss.

Laurel tells her son she loves him in Vietnamese, like we’d seen her tell Hai earlier in the hour, then appears as younger Laurel and tells him again in English. “I love you, too,” he says, thoroughly overcome and undone — but maybe in a good way? — by the whole endeavor.

THE BEARABLE LIGHTNESS OF BEING | In the car the next day, Beth remarks on how Randall seems “different. Lighter.” And he is rather smiley. “I know my birth story, Beth. And it’s not just getting left at a fire station,” he says. The knowledge that William and Laurel loved him but got royally screwed by the universe (and by “universe” I mean all of the racist and classist systems that created a world in which reuniting the three of them as a family became virtually impossible) is a balm to Randall’s long-aching spirit. So yeah, he’s feeling pretty great about it.

How great? He decides right then that he’s going to call Kevin and start healing that rift, because he doesn’t want to hold onto the bad stuff anymore. “I wanna let it all go,” he announces… but is cut short when Kevin, who also is driving, can’t talk: Madison is in labor and Kevin is driving home from Vancouver to be with his fiancée, hoping he’ll get there in time.

Now it’s your turn. What did you think of the episode? Were you satisfied with Laurel’s story? Sound off in the comments!