The ABC medical drama, which exists in a post-COVID world, explored the emotional fallout from the pandemic through the eyes of St. Bonaventure’s chief of surgery, who was determined to bury her feelings and go about her life, business as usual. But it was clear as she lashed out at Jordan (who let her personal beliefs interfere with an abortion procedure) and Shaun (who refused to teach the interns after Asher’s fatal mistake) that she was not OK.

After she treated Ben (The Baker and the Beauty‘s David Del Rio), an Iraq war veteran with post-traumatic stress disorder, Lim went for a joy ride and crashed her motorcycle. Though she walked away from the wreckage with nary a scratch, it was obvious that she could no longer ignore her own PTSD.

TVLINE | Why do you think Lim is so hesitant to admit to herself that she’s not OK?
Part of Lim’s struggle is being vulnerable, which I think is made clear in this episode. She’s got quite a large role [as chief of surgery], and she’s in charge of a lot of staff, so it’s not OK in her mind to have any kind of issue. The first part of this episode is her just feeling like, “Look, I’m tired, I’m overrun, but everybody is. I have a lot on my plate, but everybody does. Every hospital, head of hospital and chief of surgery, everybody is feeling this. I am not unique, I am not special, I am holding it together.” As you see in the last scene, she just can’t do that… It all falls apart and this is the beginning of the break. It’s a culmination of [her emotions], and she’s cracking. 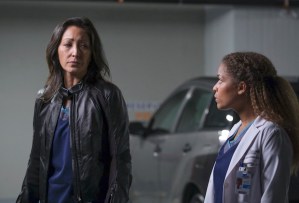 TVLINE | Claire tried to intervene — she even revealed her own PTSD diagnosis, and how Melendez helped her through her time of need — but Lim shut her down. Why do you think that is?
Lim struggles with how to receive that [help] and what to do with it. And by the way, do I really want to hear about how someone else had PTSD when that person [who helped her through it] was also my love? There’s just so many different dynamics at play. I also have feelings about Melendez and my own struggles that I am choosing not to share. It’s all there.

TVLINE | I’m glad you said that. When Claire mentioned Melendez by name, there was definitely a look in Lim’s eye. I got the sense that she was sad, but she didn’t know how to feel about her ex in conversation with Claire. Was it a conscious choice to play that unspoken conflict in the scene?
Yes, 100 percent. I’m glad you picked up on that. Antonia [Thomas] and I talked about that while we were rehearsing the scene. We were both in complete agreement that of course that’s how [Lim] would feel. It’s like, “Oh great, tell me more about your pain,” and at the same time, “I feel you, sister,” because I also feel that [pain]. 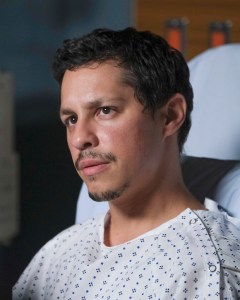 TVLINE | Do you think Lim ever fully recognized the parallels between Ben’s struggles and her own?
I think it would be too on the nose if she stood there and went, “Wait a second, I also have PTSD.” That guy went to war and he saw death in a completely different way — in a very violent way. When Lim looks at that, I don’t think she’s making the connection. She’s thinking, “I’m a doctor. I’m supposed to see illness, I’m supposed to see death, and I’m supposed to see people getting better. That’s all part of the job description, so that’s not what the problem is. Something is going on here, and something is not quite right, but I’m certainly not like this guy.”

TVLINE | What sort of thoughts are running through Lim’s mind in the immediate aftermath of the crash?
There’s the initial shock that it happened because she’s never crashed [her motorcycle before]. I don’t even think she physically feels anything when she gets up off the ground. That was an amazing stunt, by the way. The stuntman stood right up, and he had a slight limp, so I chose to give Lim a limp as well. She looks like a superhero jumping up after that.

TVLINE | But where do you think she’s at emotionally?
She’s feeling like “OK, clearly there’s a problem here.” The sound that you hear is what she is finally hearing: It’s the flatline, then she starts to hear all of those voices. All of those things are starting to get louder in her head. It’s clearly a signal of what’s been bothering her. It’s an awakening for Lim. 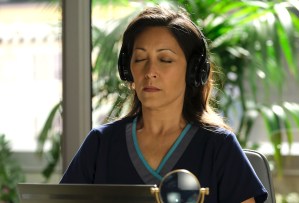 TVLINE | It’s everything hitting her at once, and she can’t ignore it any longer.
Correct. There were some sounds she was hearing before, like the scene in her office where she tries to drown it out by listening to music. She’s trying to drown out this beep, but she’s not understanding what that is yet. It’s bothersome, and it’s sort of nibbling at her, but it’s not clear. At the end, I don’t think it’s one specific thought she’s having. It’s more of a general awareness that this is attached to the experience that I have had this year.

TVLINE | Do we pick up shortly after the crash in Episode 7?
We do not. We barely see Lim, actually, but we do in the one after that. The physical injury is mentioned by Claire, but Lim brushes it off. It’s all about the emotional injury in subsequent episodes.

TVLINE | Does she continue to push Claire away? Try to the deal with her trauma on her own?
Yes, and that’s all I can say.

What did you think of The Good Doctor‘s Lim-centric winter premiere? Grade it via the following poll, then sound off in Comments.