This week on The Good Doctor, Shaun second-guesses his decision to give the new residents autonomy after Asher’s misdiagnosis results in dire consequences.

In the fall finale, Lim encourages Shaun to have a little faith in Asher and Olivia and back off as they work up their first patients. Olivia assesses Toni, a stroke patient, while Asher assesses Carl, a middle-aged ballet dancer with back pain. Asher reckons Carl has an L2 compression fracture and misses a life-threatening aneurysm, which Shaun might have found had he checked Asher’s work. He’s told as much when Lim reprimands him for abdicating his responsibilities as Asher’s supervisor.

Later that night, Shaun heads home and reads up on what it takes to be a better manager. He returns to work the following day with a list of 400-or-so skills he expects Asher and Olivia to master over time, and hands Asher a list of post-operative tests to be conducted on Carl, who is jaundiced in his recovery bed. His first surgery resulted in a second aneurysm, and he requires a second procedure. Shaun, Asher, Olivia and Lim take the next 24 hours to contemplate the least invasive surgical route, but Carl’s a high risk. The odds are not in his favor, no matter how they proceed. 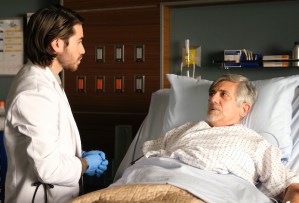 It should be noted that Carl and Asher have struck up a bit of a bond. Carl, who is also gay and a former religious man, sees a bit of himself in Asher, who previously belonged to the Hasidic Jewish community. When Carl tells Asher that it was his honor to be his first patient, Asher comes clean and tells Carl that it was his screwup that has landed him in this dire situation. Rather than get mad, Carl asks the rookie doc to recite a prayer for the sick before he heads back under the knife. Unfortunately, it does him no good. Carl bleeds out on the table.

Afterwards, a confounded Shaun visits Glassman to work through his insecurities as a supervisor. He’s worried that his inability to better communicate with his interns will result in more patients dying. In response, Glassman advises Shaun that no one is infallible; there will be days where he fails, just like everyone else. The best thing he can do for himself right now is go home, be with the person he loves and take comfort in that. Before he can do that, though, he runs into Asher, who continues to reel from the loss of his first patient. Rather than rush back to Lea, Shaun takes a seat next to Asher and stays with him for awhile. 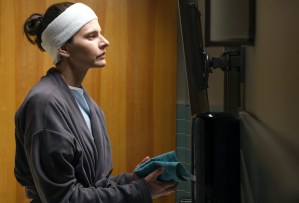 Elsewhere in the hospital, Claire and Park treat Ellie (Grace and Frankie‘s Lindsey Kraft), a woman who comes to emergency room for a migraine, but is found to have a dermoid cyst. She needs to have it removed, but her boyfriend Zane refuses to sign off on the procedure. The decision is best left to her husband, Brendan. During the surgery, fat from the cyst leaks and results in retrograde memory loss. A second operation can fix it, but it may cause her to forget the last few days, weeks, or even months, which means she’d forget all about Zane. Brendan doesn’t feel comfortable asking her to have the surgery — he doesn’t want his marriage to be a lie if Ellie manages to forget about Zane — so Zane sacrifices his happiness and asks Ellie to go through with it.

When Ellie gets out of surgery, she watches a video of herself alongside Zane. In the video, she recalls how they first met and fell in love, but it doesn’t dredge up any feelings for him. She no longer knows this man. The video just reminds her of the way she once felt towards Brendan, who, after a talk with polyamorous (!) newbie Enrique, has decided to forgive her and work on their marriage. 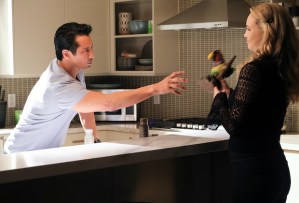 As all of that’s happening, new roomies Park and Morgan bond over their failed relationships. Park has been holding onto a parrot sculpture Mia gifted him early on in their relationship; Morgan has been holding onto a football jersey given to her by one of the Gronkowski brothers, but doesn’t reveal which one. At the end of the episode, they torch both the parrot and a Gronkowski jersey, but not the real Gronkowski jersey, which is going to be worth something one day.

The Good Doctor returns Monday, Jan. 11. In the meantime, hit the comments with your thoughts on the latest episode (and the still-young season overall).