Warning: The following contains spoilers from Part 2 of The Good Doctor‘s Season 3 finale.

Below, Gonzalez weighs in on his character’s tragic fate, confirms his ‘ship of choice and reveals why he’ll always be grateful for his time on the ABC medical drama — even if his exit felt “a little early.”

TVLINE | To confirm, it wasn’t your decision to leave?
It was a creative decision [that] just kind of came at a good time, you know? There’s a lot about this job that I loved and was honored to do, and a lot of that came out of the family that we created behind the scenes. But there also comes a time when you feel it’s time to move on, and I feel like I’m leaving Good Doctor at a really great place.

TVLINE | How so?
I love how we started. It kind of felt like even though we were this big network show, it was still like this “little show that could,” because we were taking a big chance on people’s hearts and people’s understanding, and I really enjoyed being a part of something like that from the beginning… So it’s been a joy to do the show, but at the same time, as an artist, you feel like you’re just raring to get out there and take on the next challenge.

TVLINE | When did you find out that Melendez wasn’t long for this world?
Right after the new year. We only had about six more episodes to go…

TVLINE | So you really only had a few weeks to process everything…
Which is really interesting, you know? Filming all that with the knowledge [that Melendez was going to die]. 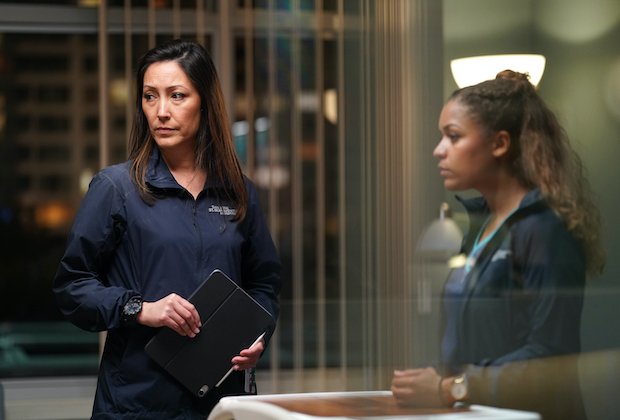 TVLINE | What was your reaction when you first read the script?
It was tough because I felt like nothing was good enough. It wasn’t going to be a good enough goodbye because, you know, I think it’s a little early… so I think that nothing was ever going to really feel appropriate. But it was very important to me that the relationship with Dr. Lim be honored. I knew what was happening with Melendez and Claire, but I had to make sure that [his relationship with Lim] was not something that in any way seemed like second fiddle… You needed to feel the veracity of it and the present nature of it. And I hope that’s what came across.

TVLINE | In the finale, you have memorable last scenes opposite Richard Schiff, Christina Chang and Antonia Thomas, but none of your other castmates. Knowing that you were approaching the end, did you start tracking your final scenes with Freddie Highmore et al.?
I think I realized [it] a little late, but there were times throughout [production] where I was the only one who knew. It made me approach each day with a little bit more of a sacred approach, realizing that these days were numbered and they were to be enjoyed with people that I really loved working with.

TVLINE | There was obviously a lot going on in this two-parter, but I was surprised that you didn’t get one last scene with Freddie.
Freddie was there for my final day, watching every scene from behind the camera in support. 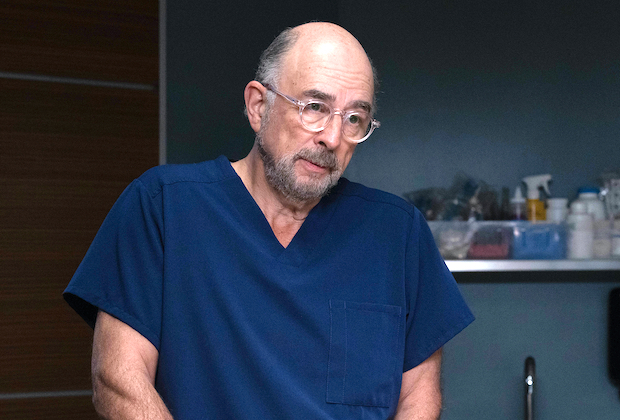 TVLINE | Let’s talk about each of the goodbyes you did get, beginning with that final exchange with Glassman. You and Schiff didn’t share much screen time in Seasons 2 or 3, but that scene sure did resonate.
Here was a man, a doctor [that Melendez] has a lot of respect for. They’re both pretty prickly personalities, but understand and respect that in each other. [They’ve] in some ways been an older bull and a [younger bull] keeping distance from each other. And when we’re brought into this room, under these circumstances, it’s all of the things that you can’t really say, or you don’t even get to fully say, until Glassman [goes] and pays [Melendez] the compliment.

TVLINE | There was a lot that went unsaid in that last scene between Melendez and Lim. Were you disappointed with how their relationship ended earlier this season?
Yeah, I think there was definitely unfinished business. There was just so much history, so much love and respect. [These were] two people that really got excited about what they did and understood each other, and therefore forgave their [shortcomings]… It would have been fun to watch them navigate [that relationship] a little more.

TVLINE | Melendez’s final goodbye is not with Lim, but with Claire. The resident professes her love to her attending, then finds that love reciprocated. What did you make of that scene?
Melendez is really discovering how he feels. It really wasn’t until all of this that he accepted how he felt about her, because I think it’s something that really snuck up on him. He can think she’s cute, he can think she’s smart, he can be intrigued, but he knows he’s not going to get involved. 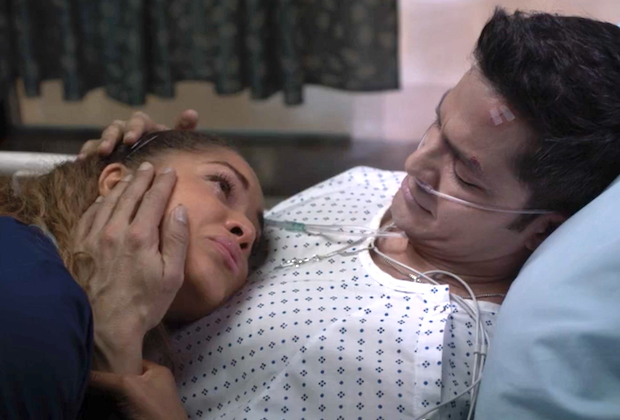 TVLINE | How did you feel about them as a potential couple? At the end of the day, he was her boss…
I don’t know. I mean, that was always proposed to me. People felt it early on, even just from the pilot, so it was always that thing that people kind of talked about… In life we have certain attractions, but it doesn’t always mean that’s somebody that you pursue romantically. For me, I always felt like maybe that was a long burn that could always kind of be there. There are two people that respect each other, have grown to love each other as human beings, as people and as friends, but the idea of going after [that] was never something I was totally comfortable with because I felt like we had created this very morally upstanding character in Melendez.

TVLINE | Putting aside your personal feelings about Melendez and Claire, what was it like shooting that last scene with Antonia?
It was tough because there were obviously a lot of real emotions. Like Dr. Melendez, I was saying goodbye to [someone who had been] in my life for three years… Antonia and I [became] such good friends. We, too, love each other, and that’s why this hurts saying goodbye. And that was interesting to do over and over and over again for a whole day.

TVLINE | Do you feel like you’ve done everything with Melendez that you set out to do?
Probably not… It’s tough, because we’re not a Grey’s Anatomy. We’re primarily a procedural that has a lot of smatterings of heart and character around it. As much as we’re an ensemble, the subject matter isn’t so much [about us], you know? Things are parceled out little by little, which can be tough for an actor in many ways, and lot of times I’m serving medicine and getting other jobs done when other parts of the character were kind of neglected. But that’s part and parcel of what makes this show a little different, and I think that also is maybe what keeps audiences coming back, because they want that taste of something, but we never dole it out cheaply.
So to answer your question, I feel like there was still a lot on the table for Neil, and I was really enjoying watching him learn his lessons and his, you know, constant pursuit of perfection that of course we’re all going to fall short of.

TVLINE | Were there any specific Melendez storylines you wanted to explore even further?
I’m still curious about [his] family. We were introduced to my sister with Down syndrome in one episode. There were also so many little [deleted] scenes. The storylines are all there, but the little scenes that we’re missing really changed the dynamic. There were a lot of scenes with Antonia Thomas [who plays Claire], [and] there were probably an equal number of scenes with Christina Chang [who plays Lim] — these different kinds of moments [that went beyond] watching people fall in love… Those were on the cutting room floor because we don’t have the time for those. 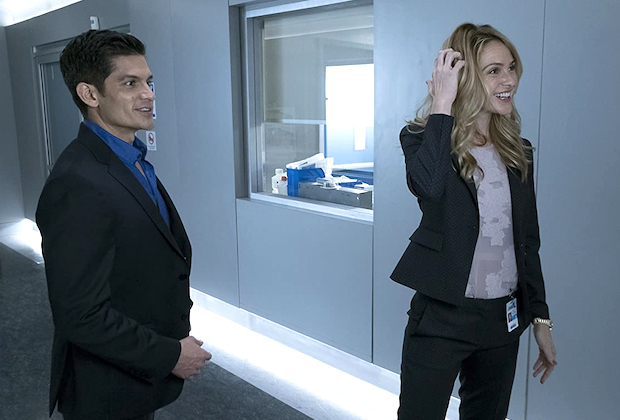 TVLINE | One that came to mind was his desire to have children. That was the whole reason he and Jessica called off their engagement in Season 1.
Yeah, but it informed everything that I did thereafter. Whenever the case involved a child or a baby, there was almost a little more of a tension. I was always kind of sure to put that in there… I don’t know if you remember, but what we really got down to at the end with me and Jessica over wanting kids [was that] I felt that I needed to concentrate on my career and not have kids.

TVLINE | Oh, right.
He knows what he loves and what he’s good at, which is surgery. You may want other things in your life, but you can’t deprive yourself of that thing that drives you. So he was just kind of caught between tensions. It would be interesting to see which one was going to win out as he grew older.

TVLINE | We are speaking the Friday before the episode airs. Do you plan to tune in on Monday night? Or do you need some time?
Well, you know, my family doesn’t [know]. I mean, some people do, but my mom [and] dad are kind of in for a big surprise… It’s important to me for them to see it and to experience it not knowing what’s happening. Hopefully the work that I do in those last few episodes [will] in some way be a goodbye for them as well. I know that it’s something that they’re obviously proud of, and fans of not just me, but of the show itself. So it’s going to be hard, but I think I’ll probably be watching it because I haven’t seen it yet. I could probably get a link, but a part of me wants to watch it along with everyone else, as hard as it is for me to watch myself. 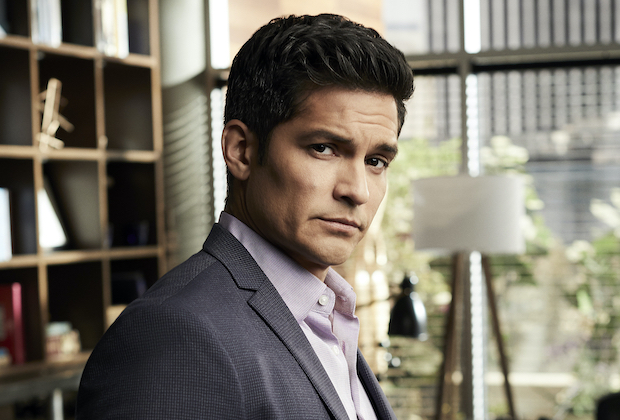 TVLINE | Last but not least, what is it that you’ll take with you from this experience?
I’m immensely proud of how incredibly received [the show] has been. When I am stopped about the show, it’s not just because I’m “that guy” on the show on TV. It’s because everybody’s got a story — a personal story on why this show has hit them so hard, or what it means to them or a family member, with or without autism. To be a part of something like that, that felt bigger than all of us, yet so small when we were together making it, is probably one of the most unique experiences about this.

Good Doctor fans, were you shocked and saddened to see Melendez go? Hit the comments to mourn the character and share your thoughts on Gonzalez’s departure.