The Good Doctor was rocked by a massive earthquake on Monday that left multiple lives — and one resident’s career — in serious jeopardy.

In Part 1 of the Season 3 finale, Glassman, Melendez and Lea attended a fundraiser for cancer research at a nearby brewery owned and operated by Marta (Ed‘s Lesley Boone), one of Melendez’s former patients. Disaster struck when Marta’s wife Noreen (Greenleaf‘s Kim Hawthorne) gave the trio a tour of the brewery. The ground shook beneath them, and the brewing tanks came tumbling down towards Lea, who went through the floorboard. At the same time, a ceiling structure fell and left Melendez with a gnarly abdominal bruise (more on that later…), while Glassman dislocated his shoulder (then popped it right back into place — ouch!).

Shortly after the quake, Lim assembled a team — which included Shaun, Claire and Park — to head over and handle triage; Andrews stayed behind to oversee matters at the hospital and conduct surgeries (with an assist from Glassman); and Morgan, who was recovering from synovectomy, managed the ER (with help from the nursing staff). As for what happened from there…

Almost as soon as Lim’s team arrived on the scene, Shaun neglected protocol and went rogue to find Lea. As he made his way through the rubble, his subconscious spoke to him through his late brother Steve, who said that saving Lea wouldn’t make her fall in love with him. But Shaun forged ahead and stumbled upon Vera (Sneaky Pete‘s Marin Ireland), an attendee who crashed the event to confront her ex, then wound up twice impaled. 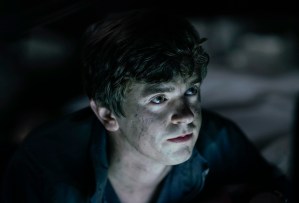 Over walkie-talkie, Lim gave Shaun the go-ahead to lift Vera and remove the rebar from her shoulder. She also told him to keep the channel open and sit tight until firefighters could get to them and use a saw to remove the other piece of steel from Vera’s leg. In the meantime, Shaun and Vera spoke about their respective love lives and the people who don’t want them. “If we get out of this alive, let’s promise to move on,” Vera said. “You can do better than Lea.” But after a moment of contemplation, Shaun said that he wasn’t interested in moving on.

“I always knew I could be a good doctor. But until I met Lea, I never knew I could drive a car, or enjoy music, or sing karaoke, or take tequila shots… or fall in love,” he said. “I don’t want to stop being the person I am with her. Lea makes me… more. But I don’t make her more. If I did, then Lea would want to be my girlfriend.”

At this point, Lea had been found beneath the rubble and brought to safety, and was listening to Shaun’s conversation with Vera over another walkie-talkie. As for whether she’ll confront Shaun about what she heard remains to be seen. As the episode drew to a close, an aftershock occurred and ruptured a pipe near Shaun and Vera. The sub-basement was filling with water, and the two of them had no way out. 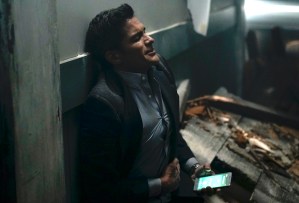 Also in dire straits was Melendez, who neglected his own injury long enough to take a turn for the worse. He told Claire that he would get the aforementioned bruise checked out as soon as he got back to St. Bonaventure, but got delayed when Marta required immediate, on-site back surgery. After he completed the procedure, Melendez threw up and passed out against an ambulance.

Another potential casualty was Casey (Snowfall‘s Bentley Green), a teenager who was partially trapped beneath a fallen wall. Park bonded with Casey, who is just around Kellan’s age, while Lim did a workup and determined that the boy’s spine had been severed and he had no femoral pulses; the rubble was cross-clamping his aorta, and he was going to bleed out as soon as they lifted the wall. But a determined Park managed to convince his superior that they should try to save Casey, even if he only stands a one-percent chance of pulling through. 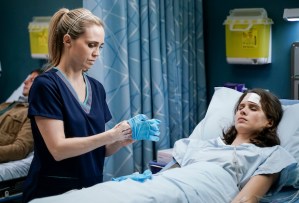 Meanwhile, back at the hospital, Nurse Petringa found that Morgan’s patient Tamara (Sacred Lies‘ Avery Konrad) had an ectopic pregnancy. Her fallopian tube ruptured, and she required surgery. With Glassman and Andrews preoccupied, Morgan removed the bandages from her synovectomy to scrub in for the procedure and save the young woman’s life. In doing so, Morgan puts at risk not only the future use of her hands, but her future in medicine.

What did you think of The Good Doctor Season 3, Episode 19: “Hurt”? And which cliffhanger are you most concerned about heading into Part 2? Sound off in the comments.