This week on The Good Doctor, Shaun and Carly deal with intimacy issues, Lim and Melendez’s interpersonal squabbling worsens, and Morgan discloses a life-changing secret.

At the beginning of “Moonshot,” Shaun and Carly’s amusement park date culminates at her place. They make their way up to her bedroom, where she begins to unbutton his shirt. Carly asks if he’s ready to lie down with her because she’s ready, and she’s done everything to make sure that he’ll be comfortable. She went out and purchased six-hundred thread count sheets, a memory foam pillow and an incandescent lightbulb, all to his liking. He turns on her lamp (you know, to confirm the wattage), and his face lights up. He’s ready — or at least he thinks he’s ready until he sees Carly on her bed. He picks up his shirt and leaves. 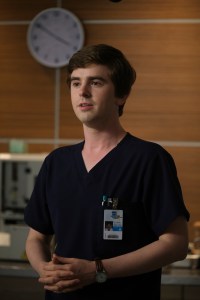 The following morning, Shaun goes to drop off labs in pathology, where Carly confronts him about what happened. She tells him that he has nothing to be embarrassed about, but he’s not embarrassed. “I want to have sex with you,” he tells her. “I think about it very often, even when I’m supposed to focus on more pressing matters.” And she wants it to happen, too, so she’s done her research. There’s a process known as exposure therapy; psychologists use it to treat phobias, but it also works with people with autism. “If you’re game, we can try it tonight,” she says. “I’m game,” Shaun replies. Later that night, they reconvene at her place, and she tells Shaun exactly how exposure therapy will work. They’ll lie down on the bed, side by side, fully clothed and not touching for 15 seconds. When the timer goes off, he’ll go into the other room for a three-minute break, then they’ll go again for 20 seconds. Over time, they’ll progress to longer intervals and inch closer to each other. She gets on the bed and tells Shaun to join her when he feels ready. She starts the timer and stares directly into his eyes, but it’s still too much for him to handle. Carly follows him downstairs and asks him to explain what he’s feeling, but he can’t quite put it into words. All he knows is that this isn’t going to work. In response, a teary-eyed Carly expresses her frustration. “I got the sheets… the pillow… the damn lightbulb!” she exclaims. “” read 18 psych journals, and you give up after eight seconds? You’re right. This isn’t going to work.” She hands him his jacket and tells him to go.

The next day at work, Park asks Shaun how things are going with Carly. Shaun tells his colleague that he “lasted eight seconds” before his girlfriend kicked him out — and the look on Park’s face is just perfect. When Shaun clarifies that he and Carly tried exposure therapy and it failed, Park tells Shaun to consider something else. He suggests that Shaun treat intimacy like a surgical problem and do his research. “Carly came up with a solution that didn’t work, but that doesn’t mean that the next one won’t,” he says.

At this point, we should diverge for a moment and discuss our Patient of the Week. Andrews, Park and Shaun tend to Dr. Rosalind Elion, an esteemed researcher whose findings have expanded the medical world’s understanding of how to best treat leukemia patients. She is admitted to St. Bonaventure with chest pain and ultimately goes into heart failure. When Park and Shaun go to talk to her about signing a DNR, she recalls going through a similar ordeal with her mother. At the time, she was just a scared and helpless 10-year-old girl. Park encourages Rosalind to reach out to ex-husband Leo so she’s not alone when she dies, but she says it’s too late. She chose her work over her marriage, and to call him now, when she needs him most, would be hypocritical. Park disagrees, and explains how he recently reconnected with Mia.

Later, while on E.R. duty, Shaun tells Park that he respects the decision that Rosalind made to prioritize work over her marriage. “Dr. Elion has had a very successful life without a relationship,” he says. “So can I.” Park argues that success and happiness are not the same thing, and that Shaun needs to decide what will make him happy in the end. He doesn’t have to choose between being a great surgeon and being close to Carly. “I think Dr. Elion is afraid,” Park explains. “I think she’s always been afraid — afraid that she might lose Leo just like she lost her mother. And you lost a person you loved the most when your brother died.” He tells Shaun that his elevated heart rate and sweaty palms are not about his sensory issues. What he’s feeling when he thinks about being intimate with Carly is what we all feel: fear. “Why would anyone want to feel afraid?” Shaun asks. “Because the thought of ending up alone is scarier,” Park answers. “I don’t think Dr. Elion refuses to call Leo because it’s hypocritical. I think she’s afraid he won’t come.” And so, Park heads down to Leo’s construction site and does his best to convince Rosalind’s ex to visit her before she dies. Leo says that he isn’t willing to put himself through that, but he eventually shows up in the nick of time. He sits with Rosalind in her hospital bed until her dying breath, while Shaun and Park look on. Shaun offers to pronounce her, but Park says he’ll do it. He walks into the patient’s room and Leo stops him. “Thank you,” he says, before leaving.

After his shift, Shaun returns to Carly’s house. He says he did extensive further research on intimacy treatment for autism, and exposure therapy is the most effective option. He tells her he’d like to try again. We then cut to them in bed together, only this time they’re not facing each other. The timer goes off and Carly tells Shaun that it’s time to take a break. “I know,” he says, but he doesn’t get up. “This is terrifying… and very nice.” They touch wrists, just like they did at Glassman’s wedding, and the A-story comes to a close.

Now let us shift our focus to Morgan. Andrews hands “the holy grail of resident surgeries”: a carotid endarterectomy. She heads to the surgical skills room to practice for her first lead procedure, and her right hand starts to tremble. She takes off her gloves and removes an unknown prescription from her coat. She downs a few mysterious pills, and the scene ends there. She eventually goes to Andrews and says that she needs a different first surgery, but he refuses to let her off the case. “It’s rare that a resident has what you have: the aggressiveness, the work ethic and the talent to be a leader,” he says. “I’m not setting you up to fail; I’m setting you up to shine. Or am I wrong about you?” “No, sir,” she responds. 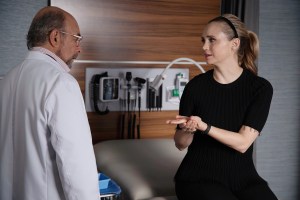 On the day of the surgery, Morgan schedules an appointment with Glassman. She told his clinic that she needed a vaccination, but it’s a lie. She confides in him that she recently saw a rheumatologist and found out that she has rheumatoid arthritis, the worst possible diagnosis for an up-and-coming surgeon. Her mother had it, too, and it destroyed her wrist and finger joints. Glassman does a scan and confirms that there’s not yet any noticeable erosion. Be that as it may, Morgan will have to postpone her surgery and see how she responds to the medication her rheumatologist recently gave her. What’s more, she needs to confront Drs. Lim and Andrews.

Morgan is determined to keep her diagnosis a secret for now, much to Glassman’s chagrin. If she tells Lim and Andrews, “they’ll expect less of me,” she says. “They’ll be looking for me to fail. That’s why I’m confiding in you instead of them. You advocated for Shaun when everybody else thought he couldn’t be surgeon.” She pauses and assures the president that she’s not comparing her arthritis to Shaun’s autism; she’s comparing people’s preconceived notions. “I’m asking for a chance to prove myself,” she says. “Right now, it’s a matter of pain, not function.” And so, Glassman obliges her request for cortisone shots and allows her to proceed with the endarterectomy. He watches from the observation deck, and there’s a moment where Morgan hesitates, mid-procedure. She doesn’t seem to be in pain, but she’s nervous that she’ll suddenly be in pain and make a mistake. Fortunately, she manages to forge ahead.

At the end of the night, Glassman approaches Morgan on her way out. She says that her pain is 90 percent better and the shots helped. He shakes her hand to congratulate her, then checks her joints. She tells him that she feels fine, but she’s lying. When she returns home, she puts her hands in a huge bowl of ice. The look on her face signals that her agony has only increased in the wake of the surgery. 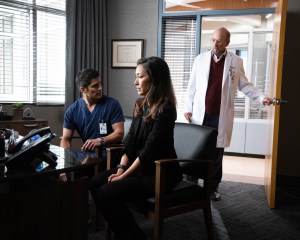 Our third and final major development involves Melendez and Lim, whose relationship drama comes to a head. Midway through the episode, they get into a very public argument at the nurses station over a high-risk procedure to remove a tumor from an aspiring astronaut’s lung. Glassman takes notice and calls them into his office. During the brief meeting, Melendez asks Glassman to look over the case, but he refuses. His chief of surgery is confident that the surgery will be a success, and that’s all he needs to know. Meanwhile, If his chief and top surgeon can’t control their interpersonal quarrels, he’ll be forced to fire one or both of them.

Afterwards, Lim and Melendez converse privately. “I want our relationship to work, and I want to be chief,” she says. “If we can’t find a way to work together with me as your boss, then something has to change.” She even considers leaving St. Bonaventure and applying for a chief position at another hospital. Rather than let it get to that, Melendez proves to his girlfriend that things can change by scrubbing in to assist her and Claire on surgery. Together, they manage to remove the patient’s tumor and save her lung, but all is not well. Later that night, Lim hops on her bike and heads over to Melendez’s house. She tells him that he was right all along, and that she’s not objective when it comes to him. She blew off his concerns about the surgery, and they can’t know for sure that it won’t happen again. “I don’t think I can give you the unconditional support you deserve from a partner, and the objectivity you need from a chief,” she says. “And I don’t want to give up on my dream. I love you, but it’s not enough.” And just like that, “Limendez” is officially broken up — at least for now.

What did you think of The Good Doctor Season 3, Episode 8? Hit the comments with your reactions.