I’ve seen every episode of Sex and the City (plus the movies) multiple times, so there’s no doubt I’ll tune in to see more of Carrie, Miranda and Charlotte — and it’s a good sign that Michael Patrick King, who shepherded the show’s golden years, is returning as showrunner. But there are two major stumbling blocks attached to this revival, starting with the lack of Samantha Jones. (Kim Cattrall won’t return to reprise her role.) The power of Sex and the City comes from its perfectly balanced core quartet, and removing any one of the four main ladies will undoubtedly throw the chemistry way out of whack. Plus, I’d argue that Samantha is the most necessary of the four ladies, since her sexually voracious lifestyle provided the show’s trademark tawdry humor and helped it push the boundaries of sex on TV. (Without her in the fold, they might as just well call it And the City.)

Secondly, even if Samantha had come back, this story has pretty much already been told, hasn’t it? By the time Sex and the City ended, all four women were happily coupled off in relatively stable relationships. Where’s the drama in that, I ask you? (The movies tried to shake up the status quo a bit, but those four main couplings all stayed in place.) It became a much different show in later seasons, transitioning to more dramatic storylines about marriage and motherhood and moving away from the thrill of being single and dating in the big city. Do we really need to see Carrie and Big bickering over the thermostat, or Charlotte scolding Harry for putting his feet up on the dining room table? We’re happy they’re happy… but we’re not sure we need to watch it.

As I see it, there’s only one way to bring back this show, minus Samantha, and actually have it recapture the spirit of the original. Here’s my pitch: We open on Samantha’s funeral. Not a huge shock there, since she had breast cancer late in the series, and it wouldn’t make sense for Samantha to be alive and not be a part of this continuation. (A majority of TVLine readers agree that killing off Samantha is the way to go, and it also fits with the revival’s title, And Just Like That…, in the sense that life can truly turn on a dime.) Her death rocks her three closest friends to the core, forcing them to take a hard look at where they are in life. Have they become too stale and set in their ways? Could they use a little more Samantha Jones-style spice in their lives? 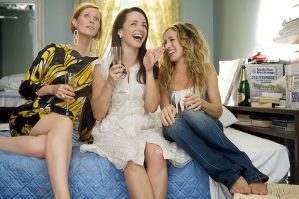 So Carrie, Miranda and Charlotte make a pact to honor Samantha by… ditching their husbands for a trial period and reentering the dating pool, single and ready to mingle. (Maybe Big is dead too, as was rumored for the third Sex and the City movie. Or maybe their husbands respect their mourning process and give them a “hall pass” of some sort. Sorry, Big, Steve and Harry, but you’re just in the way here.) This gets us back to the show’s roots as a fun, frivolous look at a tight-knit group of friends dating and mating with a parade of colorful weirdos. Plus, it has the added (and fresh!) angle of three women in their 50s facing a dating world that has changed radically since they were last single. If you remember, Carrie struggled to understand email, so there’s plenty of comedic potential in these three trying to navigate dating apps, sexts and unsolicited (um) private photos.

Now that’s a revival I’d happily watch, with the sex-positive spirit of Samantha Jones guiding her friends to a more carnally fulfilled existence. I seriously doubt it’ll happen — it’s probably too abrupt a change for a venerable franchise that doesn’t want to rock the boat too much — and I’d still rather see a full reboot of the series, with a new set of young women taking the baton. I don’t think the revival will live up to the original Sex and the City we know and love… but hey, I can dream, can’t I?

Got your own thoughts on where the Sex and the City revival should go? Drop ’em in a comment below.