Rafael Barba returned to Law & Order: SVU Thursday… and he made sure everyone knew it.

Raul Esparza’s character, who was an SVU staple in Seasons 14 through 19, left the District Attorney’s office in controversy when he stepped in to assist a mother in ending her terminally ill baby’s life. Though a jury found him not guilty of murder in the second degree, the case left a mark on the ADA. “You’ve opened my heart, and I thank you for it,” he told Liv before kissing her on the forehead and walking out of her life (and leaving the show)… until last season, when we saw them chat via video call while he was investigating voter fraud in Iowa.

In this week’s episode, Barba once more took part in an SVU case that went to trial — only this time, he provided legal counsel for the defendant. And what a show he put on! Let’s go over the highlights.

Liv and Fin grabbed coffee with Barba to “hypothetically” get his help cutting a deal for a military veteran who’d shot the man who sexually abused and impregnated his daughter. But when Barba went to discuss the case with Carisi, Sonny quickly figured out what was going on and demanded to know if Barba was representing the dad. And just like that, he was. 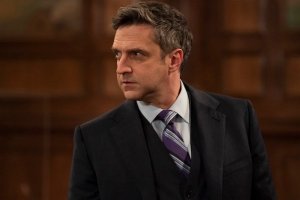 Which led to the inevitable Barba-Carisi showdown in the courtroom. Barba’s tack: No jury would want to sentence an upset dad/wounded veteran to prison for acting on an impulse most parents could easily understand. Carisi’s argument, meanwhile, was that the killing was clearly premeditated and took place after the rapist had been remanded to jail to await trial — oh, and killing someone is illegal.

“Barba, he’s guilty,” Liv said when he swung by the squad room for a visit. “Is he?” the lawyer mused. “Depends on the jury.”

During the trial, Barba hammered home the point that neither SVU nor the city’s Administration for Child Services had picked up on the fact that the teen at the center of the case had been abused by her foster father — who himself was an ACS official. And because the systems designed to protect kids hadn’t done their jobs, Barba’s client had “no choice but to protect his daughter himself.” 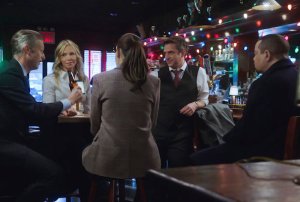 After a six-hour deliberation, the jury found the dad guilty of manslaughter in the second degree, which will result in a roughly three-year sentence — which was the deal Carisi had offered Barba at the start of the case. After the verdict was read, the two counselors grabbed a drink with Rollins, Fin and Kat, but Barba bailed early in order to see his mother before she took off for Florida.

Outside the bar, he ran into Liv and asked if she was mad at him. She replied that she thought he kinda made the case more about him than about seeing justice done. “The way that you had to leave,” she explained. “Maybe you weren’t defending him. Maybe you were defending yourself.”

He didn’t address her concerns directly, but noted that they “can’t change the past.” Liv looked at him sadly. “I just miss it, and you. That’s all,” she said. “Me, too,” he agreed. Then they gave each other a fond look, and he left. 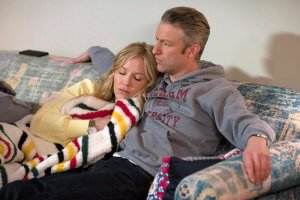 * When Rollins learned that Carisi was planning to spend New Year’s Eve alone, she invited him over for pizza with her and the girls. The former partners wound up snuggling on the couch, but an Amber Alert (for the girl at the center of the episode) interrupted anything else that might’ve happened.

* The Amber Alert also interrupted Fin’s romantic dinner with Phoebe, which stopped him from proposing to her. But don’t worry: He did it a while later, and she said yes.

Now it’s your turn. What did you think of Barba’s big return? Hit the comments!