This meeting of the Committee to Lure Sam Waterston Back to Law & Order: SVU full-time is now in session. All members in favor of keeping Jack McCoy around as a regular presence to slap some occasional sense into Benson & Co., say “aye.” All those — oh wait, everyone voted yes? Great! Meeting adjourned!

If only it were that simple, eh? Well, at least we have this week’s episode, which brings McCoy into the action thanks to the death of another beloved SVU character, then keeps him around when the unit gets involved in a very ugly right-to-die case.

Turns out, Ben Stone has died. We first see Jack as he speaks at his colleague’s funeral, which also is attended by Ben’s son, Peter (formerly of Chicago Justice aka Hey Even Dick Wolf Has a Miss Every Now and Then). When they chat the next day, Jack offers Peter a slot in New York, but he says he’s only in town long enough to get his father’s affairs in order. They talk a little bit about how much Ben loved Peter — which, apparently, is news to Peter — then the Chicagoan goes into an empty courtroom and cries.

Meanwhile, Liv and the team are handling a nasty case: A father kidnaps his infant son, but it’s only because he claims the boy’s mother wants to kill him. Of course, it’s not that simple: The poor kid has a degenerative disease that leaves him unable to see, hear, breathe and eat independently — oh, and he’s got no brain activity and he’s in constant pain. The mother has gone to court for the right to end her son’s life, the father is opposed, and it’s a big mess. 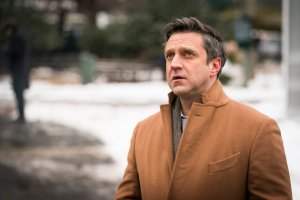 Barba, whose own father was on prolonged life support at the end of his life, is incredibly conflicted about prosecuting the dad for the kidnapping. Jack tells him to move forward with the prosecution, because “We’re not in the compassion business, Rafael.” But then he also suggests that the ADA cut the dad a deal. And when Barba goes to the hospital to do so, he finds himself alone with the mom and the baby.

“Why can’t he just die? Why?” she cries, lamenting the slow legal process. And Barba is so moved by her pain that he whispers, “He can.” And just like that, she walks over to the ventilator keeping her baby alive. But when she can’t turn it off, Barba tells her to leave… and then, after he makes the sign of the cross over the child, we’re led to believe that he switches the ventilator off.

“Rafa, what the hell? You killed the baby?” Olivia says when she sees him the next morning. He doesn’t correct her. “I expedited his passing,” he replies. Then he hires Randy Dworkin to represent him, while McCoy introduces Liv to Peter, who’ll serve as special counsel in Barba’s trial. She is less than excited about this. “I sure hope you suck,” she says flatly.

The trial goes about as you’d expect. “He couldn’t love! Or hate! Or hope!” Barba says on the stand, tears in his eyes. “I had to do something, whether that meant going to prison or not.”

Later: “Do you feel guilty for what you’ve done?” Peter asks him repeatedly, until Barba eventually quietly replies, “I do.” 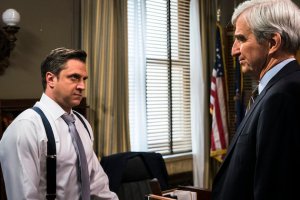 In the end, the jury finds Barba not guilty of murder in the second degree. Liv and Barba heave sighs of relief, then embrace. But guess what? He’s quitting. “Would it be unbearably corny if I said I’m going to do what I must?” he asks Jack as he cleans out his office. “Yes, it would. But I understand,” McCoy replies.

Liv later says that she feels guilty for bringing Barba into the case in the first place. They reminisce about their six years of working together. He gives a monologue about how she brought color into his world. “You’ve opened my heart, and I thank you for it,” he says, but then tells her “I’ve got to move on.” They cry. He kisses her forehead. Then he walks away… forever? (Sources say: Yep.)

Now it’s your turn. Hit the comments with your thoughts on the episode!