Warning: This post contains spoilers from Tuesday’s This Is Us.

If you watched this week’s This Is Us, you saw Kate at both her lowest and her best. And the emotional work of conveying the former — aka Teen Kate’s decision to abort an unplanned pregnancy — fell squarely on cast member Hannah Zeile.

The hour’s flashback storyline followed Kate as she spoke with her abusive ex-boyfriend, Marc, for the first time since her family threw him out of their vacation cabin. Later, in the present, Chrissy Metz’s Kate confronted Marc about how he’d treated her during their relationship. (Read a full recap.)

TVLine chatted with Zeile about Kate’s incredibly tough choice, her “lightbulb moment” during that disastrous meeting at Marc’s apartment and more.

TVLINE | Aside from the obvious, what really came through this episode for me was how alone Kate is. She doesn’t really have any close friends at this point in her life.
Yeah. When I talked to the writer, K.J. [Steinberg], I was really grateful that [series creator] Dan [Fogelman], and the writers, were like, “Come to us with any questions, anything you want to talk through. And [Steinberg] was telling me how, of course, this abortion is the huge jaw-dropper of the episode, but what it does is show the toxicity of the relationship between Marc and Kate. It really highlights that, and the abuse that she went through. When you’re saying she went through it alone, I think that she went to Marc’s apartment to not go through it alone.

She had this idealization in her mind of how Marc would react, and how she hoped he would. Unfortunately, with manipulative people like that, and abusive relationships, he starts by being kind and reeling her in. And then she quickly realizes that nothing is different and that going through it alone would probably be better than trying to involve him at all. 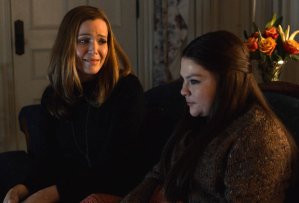 TVLINE | Kate keeps the secret from her family. Do you think it makes her resentful at all, that she went through this huge thing and no one really noticed?
Maybe a little. We’ve seen that Kate and Rebecca have a pretty turbulent relationship, so it could tie into that, as well. Another point that K.J. and the director, Anne [Fletcher], made to me, was that in Kate’s reality, there was no other option for her. And even when she goes to Marc, as an adult, it’s not to say anything about regretting it. That was the reality of what she had to do, and she wished that she had someone to be there through it, but that wouldn’t have changed the decision.

TVLINE | Do you think the Kate that you play would’ve thought that she would have it in her to basically confront someone who hurt her that way? Do you think that’s something that she ever thought she’d be able to do in her life?
No. I don’t think so, at all. That was such a cool, full circle [for] Kate’s character. That’s why this show is so cool, to me, because I’m playing her, in her teenage years, and then we watch the puzzle pieces actually connect, and the story fully arcs into her adulthood. I think that when she was able to tell Toby about it, that was probably so freeing.

TVLINE | Let’s back up for a second. I knew Marc was terrible, but I had forgotten exactly how horrible until the scene at his apartment. You mentioned that Kate had an ideal vision for how things might go with him, but given their past, how likely does she think it is that he’ll be the person she needs him to be?
He is a master manipulator, and a lot of times, sadly, when you’re in that kind of relationship, it’s only from the outer perspective that you can really see it. So I think that she went there hopeful. And Austin [Abrams] plays that character so well. You can watch, throughout the scene, Kate slowly being reeled back in. It’s like, he brings out her favorite meal, and that’s so impressive to her. [LaughsI] That’s really a bare minimum! It’s not anything really special!

But slowly, as the conversation starts to not go the way that he wants… then his attitude starts to change. When they show Teen Kate, by herself, and she’s zoning out, watching TV, it’s really a lightbulb moment. Sometimes it is like that with relationships. Something finally has to just click in you. And she just realizes, “What the hell am I doing here?” and finally, has the strength to get out. Because who knows how that situation could have played out, if she did trust him with that information?

TVLINE | I have to say, as someone who was a weight-conscious teen in the ’90s and also took my coffee with skim milk and half a Splenda or whatever — very similar to Kate’s — I hope that she has gotten a more fulfilling coffee order in the years since.
Right?! [Laughs] Thankfully, they didn’t make me drink any.