Season 3 of Cobra Kai turned up the heat on the rivalry front, but the dojos’ greatest challenge is yet to come.

After some soul-searching took Daniel to Japan and Johnny to… well, a bar stool, a visit from an old friend helped the two at-odds senseis bury the hatchet. Following another knockabout showdown with Cobra Kai, Johnny’s new Eagle Fang dojo and Daniel’s Miyagi-Do group finally united against John Kreese’s violent gang of ruffians and “no mercy” teachings. As a bloody exchange of fists between the students razed the LaRusso home, Kreese, Johnny and Daniel agreed to settle things the old fashioned way: with a karate tournament, of course!

Here, executive producers and co-showrunners Josh Heald, Jon Hurwitz and Hayden Schlossberg break down the season, including Daniel and Johnny’s new partnership, Kreese’s traumatic backstory, the show’s portrayal of bullying and whether Season 4 will be the final battle for the soul of the Valley.

TVLINE | Did you always plan for the third season to end with Johnny and Daniel’s union? And why is this point in the story the right time for them to squash their beef? I can’t imagine it’ll be completely smooth sailing for them.
HEALD | Giving them this moment was something we’ve always known was coming. We always felt like this was the time for it to happen, but we are doing it in a way where we’ve also established who these characters are. They’re both very strong minded in their own philosophies, ideals and pasts. There does appear to be a very distinct battle ahead, a very clear boundary and set of circumstances that have brought them to this moment, but time will tell if history repeats itself and they fall back into old habits again, or if they’re going to be able to weather the storm and lean into each other to do the hard work of what it is to form a partnership.

TVLINE | The end of the Kreese flashback gave us some much needed background on Cobra Kai‘s biggest bad guy. Why does he still have such a stake in the dojo, even after all these years?
HURWITZ | Cobra Kai is in his blood. He founded Cobra Kai. It was important for us to take this character you’ve known all these years — who is just simply bad… he’s Darth Vader, he’s evil — and understand where a guy like that comes from. A guy who routinely talks about “no mercy.” Why is that so important to him? We meet him in Season 3 before Vietnam and see that he was an underdog in his own right, perhaps with a more tragic life than, say, Daniel or Miguel had. Dealing with the situations he dealt with over there, and having that experience of showing mercy and seeing that the world doesn’t necessarily reward good behavior… it had a profound impact on him. It was a traumatizing experience that he carries with him to this day.

We’ve always asked, “Why would John Kreese start a karate dojo?” From the beginning it was because he believes he has something to offer young people, life lessons he thinks are important for these kids to know, to defend themselves in life. In his mind, he’s teaching people what’s necessary to get through life. Seeing that Cobra Kai was back brought that spirit back in him. He had given up on life in a lot of ways. Then, having a front row seat seeing Johnny changing some of the core elements that he thinks are important to Cobra Kai was too much to take. He’s as determined as he was when he started the dojo many years ago to educate the youth of the Valley to be prepared for the world they’re going to have to deal with. 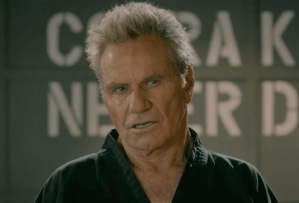 TVLINE | At the end of the finale, Kreese reached out to his old army buddy Terry for help. Has that role been cast yet and, if so, who will be playing him?
HURWITZ | Just because Kreese reached out to somebody, doesn’t necessarily mean that he’s returning to the show. That said, on our show, we try to bring back the original actor who played characters in the past as much as possible. We all loved the character of Terry Silver in The Karate Kid 3 and his portrayal by Thomas Ian Griffith, so if that character was to return for Season 4, we’d hope that he’d be the one playing him.
SCHLOSSBERG | There’s no confirmation, anything can happen, really. But I will say: If you do love Terry Silver, this is probably the best show to tune into to see if he does show up. [Laughs] But we can’t promise anything at this point because it’s all a mystery.

TVLINE | Why was Daniel’s trip back to Okinawa important for his storyline, and how did it help prepare him for the drama that unfolded at the end?
SCHLOSSBERG | The legacy of Mr. Miyagi is a big part of his psyche, and to see the Miyagi name tarnished as a result of what happened at the school… he bears that responsibility. He’s just an emotional wreck more than ever and needed Mr. Miyagi’s help. There are different ways to connect to the past. There’s prayer, there’s going to a cemetery, and for some people, it’s taking a trip to connect with their roots. Mr. Miyagi’s homeland of Okinawa is the birthplace of Miyagi-Do karate to Daniel, so it really provided the emotional and psychological answers to his questions.

By connecting with some of those characters from Karate Kid Part II, particularly Kumiko, she’s able to give him insight into Mr. Miyagi’s mind. Sometimes when you get older and you go through your parents’ belongings if they’ve passed away, you’ll see something of theirs and realize something about them that you didn’t think of as a kid. We always liked this idea that Daniel looked at Mr. Miyagi as this wise all-knowing force that had all the answers to everything, and when Kumiko reads the letter to him, he realizes Mr. Miyagi didn’t have all the answers, and that Daniel was actually the thing that solved his life. He realizes it’s OK to not have all the answers to everything. Mr. Miyagi didn’t. 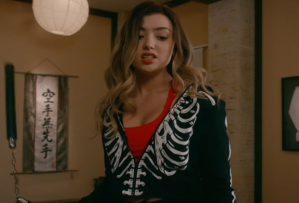 TVLINE| Were there any discussions behind the scenes about how far you wanted to take the bullying aspects on the show?
SCHLOSSBERG | We want the show to work in the same way The Karate Kid worked, both in a classic bullying sense, but also in a modern way. From the very beginning in Season 1, we incorporated aspects of cyber bullying, whether it’s body shaming or slut shaming, things that are maybe more contemporary topics even though they’ve been going on for years. We want it to be relevant and universal, that really creates the frustration in the audience of like, “God, I feel bad for these kids. I want them to overcome.” That’s the magic of The Karate Kid. It’s this underdog story.

The themes of bullying were tied into this story when we first pitched Cobra Kai to Ralph Macchio. It’s not just to bring back all of the characters that we like and find a fun Kreese backstory; it’s because this subject matter is as relevant as it’s ever been. This story and franchise are very cathartic to people who are going through that. You don’t want to disturb people too much where they can’t keep watching the show, but life can be disturbing sometimes. It’s not just the physical abuse, it’s the mental abuse. Kids can become suicidal because of these things. We don’t want to be too afraid to touch upon subjects, but we try to be careful. Typically five minutes later, there’s some comedy, too. We go back and forth between having fun, but also touching on the serious themes of bullying.

TVLINE | In terms of Johnny calling his students “pansies” or the “penis breath” cracks, did you ever have any plans of adding an LGBTQ character to illuminate the damage that sort of language could cause?
HURWITZ | We talk about all kinds of characters to add to the world and think about how they would respond or react to the mentality that Johnny has — sort of this unfrozen caveman, ’80s guy — and to contrast his verbiage with how today’s youth responds to it and the impact it can have. So, absolutely we’ve talked about adding characters from that community, and frankly, all different types of teenagers that aren’t necessarily represented.
SCHLOSSBERG | Miguel, in some ways, even though he’s not a gay character, represents the modern take and counterpoint. Sometimes Johnny doesn’t let him speak, which is part of the problem. In the very first lesson, Miguel calls him out for saying, “You don’t want to be a p-ssy, you gotta have balls.” Right away Miguel’s like, “Uh, I think you’re gender stereotyping here?” and Johnny’s like, “Quiet!” Our hope is that the audience can tell from the students’ perspective that we’re aware that Johnny is behind the times. It hasn’t come to that place where [the bullying] has affected anybody in particular, but that’s something that’s always a possibility to explore further as seasons go on and we get to know more students.

TVLINE | The show is already renewed for Season 4, but have you thought about where the series might go beyond that?
HEALD | We have an endgame in our heads. We’ve had one for quite some time, and it’s not in Season 4. It’s well beyond that. In our minds, we have seasons’ worth of story that is necessary to tell before we get to that endgame. That will be a discussion going forward with our new partners at Netflix. Can we write to that endgame? Can we know that it’s coming? That’s not always the case with television and we respect that. For now, we’re continuing to write at the same speed and with the same path that we set out with from the beginning.

Now it’s your turn! Grade the finale and season below, then drop all your Season 3 thoughts in the Comments!