With the hospitalized Miguel currently in a fight for his life, the consequences from last season’s hall brawl are going to have a major impact on Cobra Kai‘s students and senseis alike.

While the kids deal with various traumas from their seemingly boundless rivalry, the senseis are perhaps the ones reeling most from the near-fatal violence. When we revisit Daniel and Johnny in Season 3 (all 10 episodes debut on Netflix Friday, Jan. 1), will the karate masters be able to set aside their differences for the sake of their students?

“We’ve seen them almost see eye to eye a few times up until this point and it usually turns to s–t,” EP and co-showrunner Josh Heald tells TVLine. “There’s so much history between them and so much new bad blood. Their life views are so diametrically opposite, in terms of how they wake up in the morning and look at the world around them.”

As the fallout rings loudly throughout the community, everyone — especially Daniel and Johnny — is forced to accept his or her part in the conflict.

“Everyone is blaming themselves at the top of Season 3, regardless of whether they had a hand in mentoring somebody in the fight, or was just a parent of someone they let join a karate dojo and get involved in this rivalry in the first place… [but] nobody’s being harder on themselves than Johnny and Daniel,” says Heald.

As one would expect, the two teachers face the situation and their guilt in their own very distinct ways. 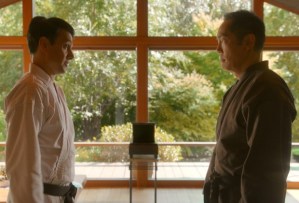 “Johnny is more likely to fall off the wagon — if he was ever fully on a wagon — and Daniel is trying to fit his grief and response into a logical framework, and is coming face to face with the realization that life doesn’t always evolve logically,” Heald adds. “It feels like a bomb went off and the shrapnel is everywhere, and the interesting part is finding out what pieces of that shrapnel are going to find each other and discover they might be stronger together than apart.”

While both men take their soul searching in completely opposite directions, Daniel’s journey brings him all the way to Okinawa, Japan, the same location from 1986’s The Karate Kid Part II. (Get a First Look here.) There, Daniel comes face to face with his former flame Kumiko and nemesis Chozen (Tamlyn Tomita and Yuji Okumoto, respectively, both reprising their roles), allowing the series to further explore Mr. Miyagi’s untold backstory.

Previews fellow EP and co-showrunner Hayden Schlossberg: “The timing felt right, story-wise. Daniel needs Mr. Miyagi more than ever, and one way of reconnecting with him is to go to his homeland, and reconnect to the past to find answers for the future.”

Excited to revisit some Karate Kid 2 characters? Think Johnny and Daniel can bury the hatchet? Drop your thoughts in the Comments below!