We hope Dr. Hawkins doesn’t mind, but there’s a new Conrad in town at The Resident.

TVLine has an exclusive first look at Conrad Ricamora (How to Get Away With Murder) on the Fox drama’s upcoming fourth season, where he’ll recur as Dr. Jake Wong. A gay plastic surgeon (and singer-songwriter in his free time), Jake is also Dr. Bell’s former stepson from a previous marriage, though their relationship ended on a bitter note after Bell and Jake’s mother divorced.

The photos above and below come from Ricamora’s debut in Episode 2 (airing Jan. 19), which includes a seemingly tense conversation between Jake and Bell, if we’re reading their body language correctly — and executive producers Amy Holden Jones, Andrew Chapman, Peter Elkoff and Todd Harthan suggest we’re interpreting the scene correctly.

“After seeing loving families rally around sick relatives during the pandemic, Bell, who’s burned a few bridges in his past, attempts to reconcile with his estranged stepson,” the EPs jointly tease to TVLine. “Jake doesn’t make it easy for Bell to earn his trust, but over the season, the storyline provides big emotional moments for the audience.”

The Resident‘s fourth season is shaping up to be an eventful one for the other Chastain docs, too: In the Jan. 12 season opener alone (8/7c), longtime loves Conrad and Nic will tie the knot in an outdoor wedding ceremony (watch a clip of their vow exchange), while in a series of flashbacks, Chastain Park Memorial is overwhelmed by the coronavirus pandemic (watch trailer).

Scroll down to see Jake’s reunion with Bell in Season 4, then hit the comments with your hopes for the new episodes! 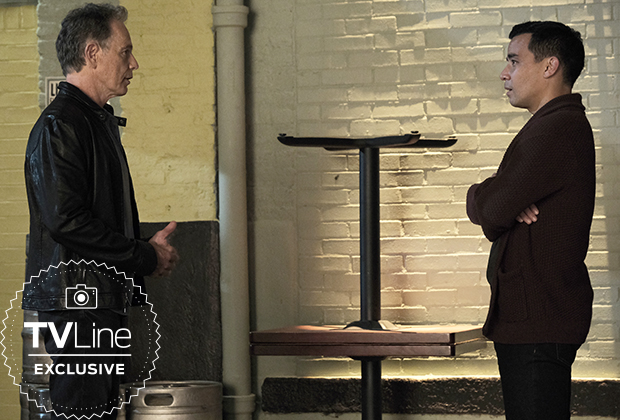