This Is Us may not have aired a Christmas episode this season, but that didn’t stop the NBC drama from gifting its viewers with a huge revelation in the final episode of 2020: Kate had a secret pregnancy in her past that she’d never shared with anyone — not even her brothers. (Read a full recap.)

Naturally, we wanted to know everything we could about this heretofore unexamined pocket of Kate’s early adulthood. So in advance of the show’s return on Tuesday, Jan. 5 (9/8c), we chatted with series star Chrissy Metz about her character’s big announcement to Toby and where it may lead. Oh, and since we had her on the line, we also grilled Metz about where the heck Kate is in all those flash-forwards?! (“She might have things to do!” the Emmy nominee joked.) 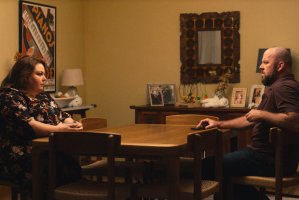 TVLINE | In the last episode before the break, we learned that Kate found out she was pregnant after her abusive relationship with Marc ended. In the episode, she doesn’t actually talk about terminating the pregnancy, it seemed like that was inferred. Was it?
Not necessarily. You know, that’s one of those things where they leave it up in the air — and we will eventually find out — but as far as that particular scene and that episode, who knows? What’s really shocking is she never told even Toby. So, it’s going to be really interesting to see what ends up unfolding as it pertains to that really huge event in her life. It’s something she never, like ever, was sharing with anybody, and never had.

TVLINE | You’ve mentioned in the past that we were going to find out something this season that would explain a bit of why she turned to food to cope. Talk to me about how this event, however it plays out, affects the rest of her life.
Yeah. She had so much shame and guilt around her father’s death, and she really blamed it on herself. But when it’s something that she’s really responsible for, whatever ends up evolving and happening, that that is something she never told a soul. That’s a very big deal, when it comes to anyone who keeps secrets and anyone who decides not to talk about something. Literally, you’re stuffing your feelings down.

You’re stuffing whatever’s going on, and because it’s so complicated and complex when it pertains to Marc and their relationship, it’s a really big deal. This is something that she’s finally ready to grapple with, at least as far as telling Toby what’s going on, what really happened. And what does it mean for the relationship, and for her as a woman, and as all the ways that she thought about herself? I think that contending with her past in this way  — we’re going to get to see how she does this — but it’s something that everybody can relate to. No matter how big or small the event is in our life: that when we carry it around, we really carry it around.

TVLINE | It feels like a bit of a growth moment for her, that she’s now able to talk about these things that she considered either shameful or hurtful in the past.
Exactly.

TVLINE | Do you think this is something she couldn’t have done a year ago, or at the start of the series?
Definitely not… I think she’s hit a particular point in her life that she’s like, “Yeah. This is not serving me anymore.” 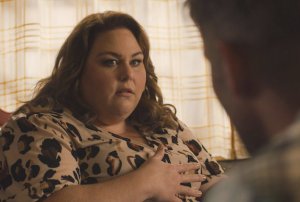 TVLINE | Also on that tip, saying to a potential mom, “I think we would be really good parents for your child,” is also a really big confidence step for her, I would think.
Oh, yeah. I don’t think she thought she was good at anything, and she still might question it, but not in the way she used to. She’s proven to herself that not only could she come through a miscarriage and obviously everything else that was in the past, but then, having a child with special needs and then a husband who is completely changing before her eyes — realizing that if you want to keep something, you’ve got to work at it. As I always say, esteemable acts create self-esteem.

She’s shown up for herself so many times and proven to herself that, “Oh, I think I got this,” and it’s a huge character arc essentially for her to really come from believing that she couldn’t even get a real job. She was sort of just living in the shadows of her brother as his assistant. Now, everything that she’s contended with has really shaped her to be the woman that she’s always known that she could be, but was afraid to be.

TVLINE | You alluded to Toby and CrossFit. I need you to know, I was ready to take off my earrings and fight LadyKryptonite, if that’s what was called for.
[Laughs] Right?! I mean, it’s a running joke on the set. I’m like, “Where’s Kara? Where is she?!” It’s funny because we never see her. We never… or at least, I haven’t met her yet, if she’s a real thing. But yeah, everybody’s ready to throw down with her.

TVLINE | People are very worried because you have not shown up in the flash-forwards, and I’m just wondering if there’s anything you can say at all that would ease anybody’s mind.
I know. I’d like to just tell people that Kate does run errands. She might have things to do! [Laughs] She could have gotten the car washed. Who knows? I say not to fret. Also, if she’s not alive, guys: Nobody’s ever really gone. I mean, we see that with Jack. So, not to worry either way.