Before Maddie welcomes the next generation of Buckley into the world, 9-1-1 is introducing us to the twosome at the top of the family tree. 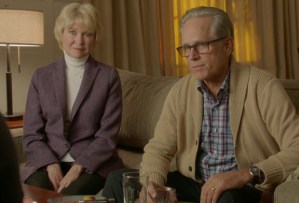 As you’ll see in TVLine’s exclusive sneak peek, Gregory Harrison and Dee Wallace will guest-star in the Fox drama’s upcoming fourth season as Buck and Maddie’s parents Phillip and Margaret Buckley. They’re worried about their children — and from the looks of things, they have every right to be.

Maddie, who learned of her pregnancy in the May finale, is seen telling father-to-be Chimney, “I think I’m scared.” (Speaking of the finale, we still don’t know what Athena’s daughter wanted to discuss with Maddie at the party. Showrunner Tim Minear has already said he won’t tell us, so… any theories?)

Elsewhere in the video, Bobby expresses his own concerns over Athena as she heads back into the field after her near-death experience last season.

Season 4, which is technically set in Sept. 2020, also introduces a new woman for Buck… as well as a childhood secret that leads to a “Buck Begins” episode.

Hit PLAY on the video above for your exclusive first look at 9-1-1‘s fourth season — premiering Jan. 18 at 8/7c on Fox — then drop a comment with your hopes below.