A star-studded train crash on Monday’s 9-1-1 finale set the stage for a bittersweet hour loaded with several life-changing twists.

Most of the chaotic episode chronicled the 118’s attempt to save the passengers aboard that ill-fated train, including Abby, her fiancé Sam (played by Scrubs‘ Travis Schuldt) and a drummer (played by Rumer Willis) who will not be performing at the Roxy anytime soon. The next day, Buck and Abby had a conversation two seasons in the making, in which she explained that she isn’t the woman she was when she left — and she doesn’t want to be.

Elsewhere, Athena reluctantly discussed her recent trauma with a victims advocate (played by Brooke Shields), Michael received good news (and a date with his elevator buddy!), Eddie forced himself to get comfortable with the idea of Christopher going to sleep-away camp, Hen’s family helped her prepare for the MCATs, and Maddie informed Chimney that she’s pregnant with their first child.

Below, showrunner Tim Minear discusses the finale’s biggest moments, as well as what’s ahead for a few key members of the 118:

TVLINE | How fortunate that you guys were able to finish filming this season before the shutdown.
Right? Both shows, right under the wire. I had a stack of unfinished 9-1-1 cuts that we’d been shooting while Lone Star was airing, and I was about to basically start living in the editing room. Then one day I thought, ‘Maybe I won’t drive out to the lot. Maybe I’ll just do notes from home,’ and I’ve been in my house ever since. So it’s been about two months, and I’ve been editing remotely the last eight episodes.

TVLINE | Well, I’d say you’ve earned a break, but I doubt you’ll take one.
Oh, we’ve already started the writers’ room for 9-1-1, and we’ll be starting Lone Star probably next week, all in virtual rooms. 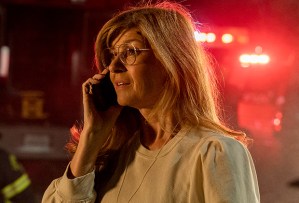 TVLINE | Let’s dive into the finale, specifically Buck and Abby’s post-crash talk. When she told him that she couldn’t be herself with him, was that supposed to make him feel better?
I don’t know if it was supposed to make him feel better. For Abby, Buck was the thing that helped dislodge her from the rut that she was in and allowed her to go off on this adventure to discover who she was. The danger of going somewhere and discovering who you are is discovering who you are. You may not come back as the same person, which is what happened with Abby. As a fan of the show, while I wanted a great reunion between Buck and Abby, what I was really hungry for was a moment for Buck to go, ‘Why didn’t you call me?! What the hell happened?!’ What the hell happened was that Connie [Britton] was off producing Dirty John and she had other stuff to do. But in the show, she went off and basically ghosted him. That’s how he felt about it. Buck feels mature to me at the end of that story. He feels like a guy who realizes that a chapter is over. It did them both some good, and he can’t be angry at her. In fact, while he thought that his metaphorical train might have jumped the tracks, he’s not at the end of the line. He’s still on his journey.

TVLINE | So when Buck told Bobby that he’s doing much better, we can take him at his word?
We can. He’s been a little untethered here and there. At the end of last season, he didn’t even know if he could continue being a firefighter. So he’s been through a lot. The signature moment for Buck in Season 3 was him meeting Red and seeing the ghost of Christmas Future. That could be him. So Buck is not in a bad place; he’s in that place where you don’t know what’s next. It could be amazing, and a lot of it is going to be in your hands. Not all of it, but a lot of it.

TVLINE | Brooke Shields was a nice surprise. Do you hope to have that character back next season?
Uh, that would be a hard yes. I thought Brooke was great. There are different elements of first responding and first responders, and somebody who’s in the role that Brooke’s character is in — somebody responding to the first responders — is a rich area for us to explore. I would love to see her come back. Also, Athena is not done healing. She’s got some grappling to do. 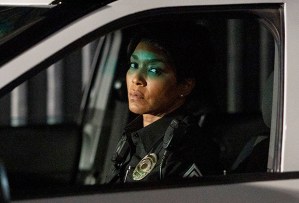 TVLINE | I’m not going to lie, I was a little worried that you were going to take Athena from us.
Not today!

TVLINE | You also gave Michael some good news. Is this the beginning of a more hopeful story for him? Things were real grim there for a while.
Yes. We love Michael. We think he’s a real asset to the show.

TVLINE | And it’s safe to say we’ll see his doctor boyfriend again?
Yes, you will.

TVLINE | Hen going to med school feels like a natural progression for her. But does that mean we’ll be seeing less of her?
Does that make you nervous?

TVLINE | A little bit.
Good. It makes the writers nervous, too. But I think that’s a good thing for the story. I do not see reducing Aisha Hinds’ involvement in the show in any way. It just means we’ll have to tell this story in a way that is satisfying and engaging and rewarding.

TVLINE | You’re not secretly setting up a medical spinoff, are you?
[Laughs] As far as I know, no. We’re pretty much a show that takes place outside of the hospital — though I know we do spend a lot of time in them, too. 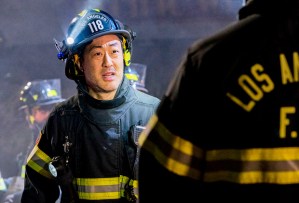 TVLINE | And we’ll be back in the hospital at some point for the birth of Maddie and Chimney’s baby. That made me so happy.
Me too. I love them so much. [Sobs]

TVLINE | Is it safe to assume there will be at least one Uncle Buck joke made?
There’s got to be, right? I think we already did one with Christopher, but for sure.

TVLINE | Actually, speaking of Maddie… May said there was something she wanted to talk to her about, but did we see what that was?
Hmm… No, we didn’t.

TVLINE | Are you able to say what they were talking about?
I’m completely able to… but I’m not going to. [Laughs]

Bah, foiled again! OK, 9-1-1 viewers, what are your theories about May and Maddie? And what did you think of the long-awaited (and much-hyped) reunion between Buck and Abby? Grade the finale and season below, then drop a comment with your full review.