Golden Globe nominee Brooke Shields will also guest-star in the final hour of Season 3, TVLine has learned exclusively. Her character, Dr. Kara Sanford, is a victims advocate who works with Athena in the aftermath of her near-fatal encounter with the serial rapist. Shields is no stranger to the Ryan Murphy-verse, having previously appeared on Scream Queens and Nip/Tuck.

We’ve also learned that Rumer Willis, whom we previously reported would appear sometime this season, will finally show up in Monday’s finale as one of the passengers aboard that ill-fated train from Phoenix.

And here’s a mystery that shouldn’t be too difficult for observant fans to solve: Scrubs‘ Travis Schuldt will also play a train passenger… with ties to Abby. (While you mull that one over, here’s another fun fact to enjoy: Schuldt is married to Natalie Zea, who recurred as Rob Lowe’s love interest in the first season of 9-1-1: Lone Star.)

While the train wreck remains the finale’s central crisis, Fox’s promo for the episode also hints at a dramatic development for Michael (here’s hoping for good news!), as well as some sort of surprise for Chimney and Maddie. Click here watch it.

Check out another exclusive first look at Shields’ appearance on the 9-1-1 finale below, then drop a comment with your hopes for the season’s final hour. 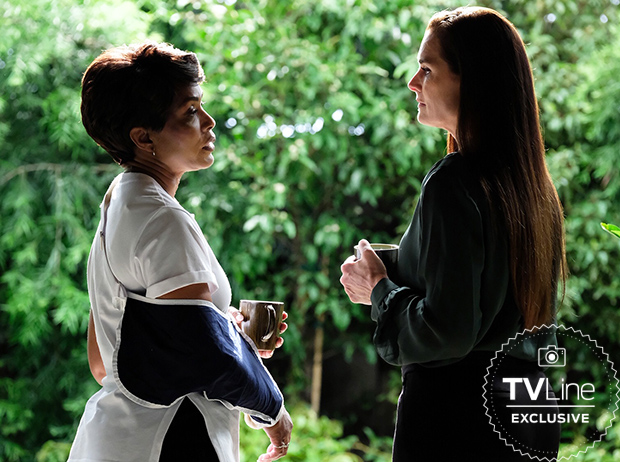