HBO has gifted us all with a gorgeous, soul-crushing holiday present: a bonus episode of Euphoria in which Rue admits that she doesn’t plan to be alive much longer.

Making us ache for/worry about Zendaya’s character and her peers isn’t new territory for the series, which revels in the “Parents, betcha didn’t know this was going on!” aspects of high school life. But the story presented in the hour-long special is stripped-down in a way Euphoria typically is not; the effect is both stunning and heartbreaking. 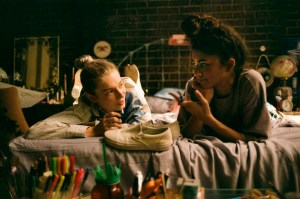 We open on Jules lying in bed, wearing only a pair of undies, her back to the camera. Rue dips into the shot and starts dropping playful “good luck” kisses up Jules’ spine, until she reaches her face and they both dissolve into laughter. It quickly becomes clear we’re in Rue’s fantasy, with her and Jules living in an apartment awhile Jules is in college or art school or something of the sort. The feel is generally sunny, happy and lovey-dovey, with the women exchanging “I love yous” and Rue snuggling up to Jules from behind while she brushes her teeth. Eventually, Jules gets dressed and takes some of her work to school for a presentation. The minute she’s gone, Rue digs some pills out from under the mattress and takes them into the bathroom, where she crushes them and snorts them in short order.

Just like that, we’re back in reality, in the bathroom of an all-night diner, where Rue has just inhaled a line. Afterward, she goes back out into the dining area to sit with her 12-step-program sponsor Ali. As they eat pancakes, she talks about how she’s “doing really good, actually” and maintains that she’s had an epiphany. “I feel like I’ve found this amazing balance, where I’m happy and healthy and not looking to anybody for that happiness.”

It should be noted that Rue looks neither happy nor healthy — nor sober — as she continues to ramble about how silly she was to daydream about a future with Jules. Meanwhile, Ali just kind of waits for her to stop, then he announces: “Rue, you’re high.”

What follows is nearly an hour of a highly engaging, super sad performance by Zendaya and Colman Domingo. Some notable moments: 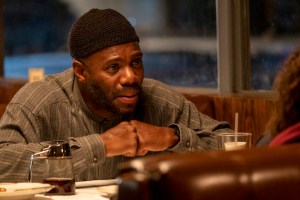 * Ali points out that she sees sobriety as a weakness in the face of her issues, “and what I’m saying is: Sobriety is your greatest weapon.”

* Rue confesses that when she’s clean, her thoughts get very dark: “To tell you the truth, drugs are probably the only reason I haven’t killed myself.” Eventually, she says that she doesn’t want to get clean, and with a great deal of compassion, Ali says he understands.

* We learn a bit about Ali. In no particular order: He was born Martin but changed his name when he converted to Islam; he has been clean for seven years and, prior to a year-and-a-half relapse, had been clean for 12 years before that; he has two grown daughters, with whom he has a tenuous relationship. (At one point, he steps outside to smoke and give them a call. The conversation is brief and a little stilted.)

* While Ali is outside, Jules — who is, ostensibly, somewhere far away —  texts Rue “I miss you” and sends her a song: Moses Sumney’s “Me in 20 Years.” Rue listens, and her heart seems to break all over again.

* Rue tells Ali she gets stuck on their program’s Step 2: the notion that a power greater than ourselves can restore us to sanity. She says she doesn’t believe in God, and her father’s death seems to have sealed her belief that there is no reason behind anything that happens in the world. Colman seems a bit subdued by the depths of her grief, but he maintains that it’s imperative she believe in something. “You’ve got to believe in the poetry, because everything else in your life will fail you, including yourself.” He adds that her only hope is “revolution, inside and out.”

* When Rue says that she would’ve stayed clean if Jules hadn’t cheated on her, Ali is taken aback by the fact that they were dating. “So it wasn’t just kissing? You talked about being together?” he presses. She says he’s being weird. “We said ‘I love you’ a lot,” she adds. “I say ‘I love you’ to my barber,” he counters.

* The conversation about Jules takes a turn when Rue says that maybe what happened with her bestie is “the universe’s punishment for me being a piece of s—t my whole life.” She lists her wrongs, including stealing from her mother and threatening to kill her with a piece of glass. He repeatedly tells her that drugs change who you are as a person,” but that nothing she has done is unforgivable. However, the longer she uses, he says, the more she’ll lose: “Not just the things you love, the things you value.”

* That’s when Rue, who by this point is on the verge of tears, whispers, “Ali, I just don’t really plan on being here that long.” She explains that everyone is so angry, and “I don’t want to be a part of it. I don’t even want to witness it.” And when he asks her how she’d want her mom and sister to remember her, she starts crying in earnest. Finally, she chokes out, “As someone who tried really hard to be someone I couldn’t.” Ali reaches out and takes her hand, saying, “I got faith in you.”

* It’s raining when they leave. As Ali drives Rue home and “Ave Maria” plays on the soundtrack, the camera does a slow push in on Rue’s face.

Now it’s your turn. Grade the special via the poll below, then hit the comments!