The East Highland winter formal has arrived during Euphoria‘s season finale — and if this weren’t Euphoria, I suspect the school dance would be a totally lighthearted, giddy occasion.

But this is Euphoria, where even something as colorful and fun as a town carnival can turn into a hotbed of teenage angst. It’s no surprise, then, that Sunday’s winter formal brings its fair share of heartbreak, anxiety and thinly veiled threats.

Before you tell us what you thought of Euphoria‘s finale, let’s break down the events of “And Salt the Earth Behind You”:

CRAZY TRAIN | We begin with Rue, who did have to take a trip to the hospital for a kidney infection, following her Love Island-induced urination hiatus. Despite the intense pain that she can only treat with Tylenol, due to her substance abuse issues, Rue tells us via voiceover that “I love hospitals. If I could spend the rest of my life in a hospital, I would. Because when you’re in a hospital, you have zero responsibilities.” For three anxiety-free days, the hospital staff takes excellent care of Rue, and her spirits are further lifted by a visit from Jules. “Did all this happen because I left?” a concerned Jules asks Rue, but Rue promises her that wasn’t the case. Jules also apologizes for not telling Rue the truth about the whole Nate Jacobs situation from the start, and the two finally seem to be on the right track again.

Well, sorta. Once Rue and Jules arrive at the winter formal (with Rue donning a glamorous purple ensemble and glittery eye makeup, courtesy of Jules), things start to get distant and weird once again. Rue notices that Jules is still texting Anna, the girl she hooked up with when she was out of town, and Rue isn’t thrilled when Jules sneaks off to the bathroom to take selfies for Anna within minutes of being at the dance. Eventually, Rue tracks her down in one of the stalls, and Jules asks why Rue doesn’t ever kiss her. “I kiss you,” Rue insists, but Jules replies that she wants Rue to want to kiss her “so bad that you don’t even ask.” Rue can’t come up with a response in the moment, so Jules quickly moves on: “F—k it, let’s dance.” (And they do, with lots of middle fingers aimed at Nate when they spot him at the other end of the dance floor.)

Later, Rue confronts Nate outside the school, telling him she’ll “ruin his whole life” if he ever does anything to hurt Jules or Fezco (since she’s figured out by now that Nate was responsible for the police raid at Fez’s place last week). Nate fires back with a hypothetical situation for Rue: What will Rue do when Jules eventually outgrows this town and outgrows Rue, leaving Rue behind while she goes off to achieve her dreams? (Always a charmer, that Nate.)

Rue and Jules eventually find each other again outside, and Rue makes the bonkers suggestion that they ditch the dance, go home to pack their bags, then take off and leave this town behind. (She even kisses Jules without asking first, to emphasize just how serious she is.) Jules, naturally, is totally game — but by the time the girls get home to pack, Rue begins to freak out, second-guessing the whole idea. They make it all the way to the train station, with Jules still cool as a cucumber, but Rue is clearly spiraling. Jules steps onto the train, gripping Rue’s hand, but Rue sobs, silently communicating that she can’t do it, despite Jules begging her and telling Rue she loves her. The train eventually gets moving, with Jules on board and Rue watching it leave from the platform. Then, on her walk home, Rue has a full-blown panic attack, weeping as different memories flash through her mind — happy moments with her sister, brutal arguments with her mother, her father’s heartbreaking death.

Finally, Rue makes it back home, looking utterly worn out — and she snorts a line of drugs before collapsing back onto her bed.

Also in the hour… 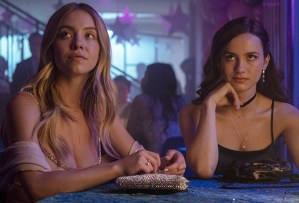 * Nate shows up to the dance with someone who isn’t Maddy, and we learn that he and Maddy had some awkward non-sex a few nights ago, when Nate couldn’t get an erection. Nate insists that he’s just got a lot on his mind right now, and he’s annoyed that Maddy blabbed to her friends about the numerous photos of other guys’ junk that she saw on Nate’s phone a few weeks back. Maddy says that it’s really fine if Nate is into guys — “Sexuality is a spectrum!” — but he insists that he’s not, then leaves the room to take a shower. While he’s in there, Maddy swipes a DVD that she finds sticking out of a book in Nate’s room, which presumably contains more footage of Nate’s father doing awful things in motel rooms. (Or perhaps it’s those incriminating photos of Jules?) We don’t actually see what’s on the DVD, but we do later see that Maddy has watched it… and she’s completely shocked at whatever she just saw.

Before Maddy can leave the Jacobs household, Nate’s dad approaches her and, in no uncertain terms, tells Maddy to break things off with her son. (“Your whole family is so f—kin’ weird,” Maddy accurately informs the man before leaving.) So, at the formal, Maddy does as she was told, telling Nate during a slow dance that he’s psychopathic and abusive and they shouldn’t be together anymore. “I know,” Nate responds somberly.

In another flashback, Nate singlehandedly wins a recent football game for the East Highland team — but later that night, his dad makes it clear that Nate’s victory wasn’t impressive, since he lost control of his team and proved he isn’t a strong leader. When Nate calmly and slowly gets up in his dad’s face (and I mean very close to his dad’s face), Cal pins his son down and begins to violently wrestle with him, and Nate fights back and cries until the men eventually end up on the floor. Nate catches a glimpse of himself in the mirror as he and his dad wrestle, and he completely loses it: He begins to bang his own head against the floor repeatedly, and Cal seems taken aback by his son’s own violence toward himself. As Nate continues to wail and thrash around his room, Cal leaves and sits alone in his office, looking stunned.

* Cassie, accompanied by her mom and Lexi, decides to get an abortion. “How do you feel?” her mom asks once it’s all over. “Better,” she replies.

* In order to placate his drug supplier, Fezco breaks into a nearby house and robs a wealthy doctor who’s connected to the supplier, who also has stacks and stacks of cash stashed away in his office. The robbery briefly goes awry when the doctor takes out a gun of his own and aims it at Fezco, but Fez ultimately gets the upper hand during the scuffle and walks out with plenty of money (and a guarantee that he’s permanently scarred the doc’s young son, who was watching the scene from the hallway). Later, when Fez presents the cash to his supplier, there’s a worrying smear of blood on some of the bills, and it doesn’t go unnoticed.

* Kat, who seems to be second-guessing some of her recent life choices after last week’s confrontation with her friends, decides to apologize to Ethan for the way she’s treated him as of late. At the winter formal, she pulls him aside and explains that she was hurt when she saw him flirting with another girl at the carnival. Ethan, proving that not everything on Euphoria has to be bleak, admits that he’s had a crush on Kat since he first sat down next to her in class. “Is one of us gonna get hurt? Yeah. Probably,” he tells Kat. “But I’ll do my best to make sure that it’s me.” Kat cries a bit, Ethan kisses her sweetly, and reader, I ‘ship it hard.

With that, I turn it over to you. What did you think of Euphoria‘s season ender? Cast your votes in our polls below, then drop a comment with your full reviews!