Here’s something to fire up your Thursday: We now know what some of the dragons in the Game of Thrones prequel House of the Dragon will look like.

At the bottom of his Medium post announcing that Warner Bros.’ entire 2021 film slate will premiere on HBO Max at the same time it does in theaters, WarnerMedia CEO Jason Kilar tossed in a few visuals for Game of Thrones fans.

“Principal photography starts on the next Game of Thrones series, House of the Dragon… in a few months. Look out for dragons overhead!” he wrote. 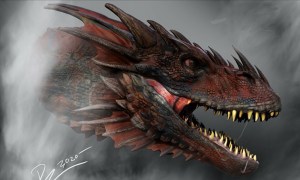 The spinoff was co-created by Thrones author George R.R. Martin and Colony creator Ryan J. Condal. Miguel Sapochnik, who directed some of Thrones’ most memorable episodes, will serve as co-showrunner alongside Condal. The project is a reworking of the rejected spinoff concept from Game of Thrones writer Bryan Cogman, on which HBO officially passed.

Fire & Blood, a companion book Martin wrote to go along with his A Song of Ice and Fire novels, will provide a template for the new series. That source material reportedly gave House of the Dragon an edge over other Thrones continuation ideas including Jane Goldman’s pilot, which starred Naomi Watts (Twin Peaks) and which was killed in October 2019.

The show is slated to premiere sometime in 2022.

Take a good look at the concept art above — click on the images to see them in detail — then hit the comments with your first impressions!