Wednesday was a big day in Masked Singer-land: Not only did the semifinals mark the exit of three Season 4 competitors, but an early renewal ensured that Ken Jeong will be dropping it like it’s hot for many more episodes to come!

In other news, the two-hour broadcast gifted us with one of the most ridiculous lines I’ve heard uttered on TV this year, courtesy of guest judge Craig Robinson, who’ll host The Masked Dancer when it gets underway in December. It’s so deliciously terrible, can’t wait to relate it to you. So let’s get these performance recaps going, shall we? 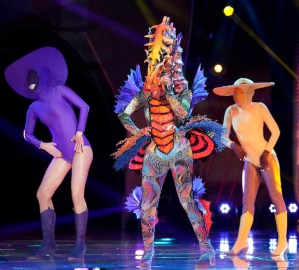 SEAHORSE | During her clues package, Seahorse made a point of telling us how she’d “never even attempted” choreography before this competition, but she was going to do so because she wanted to take her performance up a level. And if she hadn’t mentioned it, I don’t know if I would’ve noticed how breathless she seemed at times during Bruno Mars’ “That’s What I Like,” but she did and I did. She still sounded amazing, though. Clues included: A telescope, Soul Street, and “Brave little girls grow up to be fierce women.” Also, she has a connection to Nick Cannon: “This is wild, but even before this show, you were a great host to me.” (My guess: Singer Tori Kelly.)

CROCODILE | Croc sang Aerosmith’s “I Don’t Want to Miss a Thing” and, dare I say?, improved it: It takes quite a vocalist to make Steven Tyler’s scream sound like a thing of controlled beauty. Clues included: two kids, pizza rat (“Paisanos, this clue is bellisima”) and a connection to Robinson: “You’re one of my favorite actors, and it’s cool to be able to share the screen with you again.” (My guess: Backstreet Boy Nick Carter.)

MUSHROOM | After a bunch of you recently guessed a certain person for Mushroom, now I can’t hear anyone else when I hear him sing. So a) I think you’re right, and b) thanks for that. His take on Amy Winehouse’s “Valerie” was fun and boppy in a way that showed yet another side of his many-faceted talents; I’d argue that Mushroom is the most versatile performer in the bunch this season. Clues included: Mention of how the COVID-19 pandemic has “taken someone close to me,” a clock reading 3, and a connection to Robin Thicke: “I love mixing it up with you again, because this is definitely not the first time we’ve connected.” (My guess: “Wake Me Up” singer Aloe Blacc.) 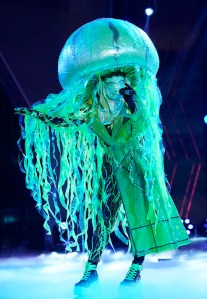 JELLYFISH | The boneless beauty sang “Stay” by Rihanna feat. Mikky Ekko, which sounded great but was maybe a little too low-energy for this point in the competition? Nice work on that build toward the end, though. Clues included: The Eiffel Tower, “Bonjour from Paris,” mention of being at the “top of my game,” a shell and a connection to Jeong: “I’ll be direct. We’ve never met, but I can’t say I didn’t try.” (My guess: Olympic snowboarder Chloe Kim.)

POPCORN | “I’m going to do what I’ve been doing since all these other creatures were in diapers,” Popcorn said before hitting the stage for a killer version of Tina Turner’s “Better Be Good to Me.” (If you’re a TVLine OG, you might be interested know that this song also is one of Michael Slezak’s karaoke go-tos, and he, too, slayyyyys.) Other clues included a stop sign and a connection to Jenny: “We definitely talked before, but never about how we both are published authors.” (My guess: Singer Taylor Dayne.) 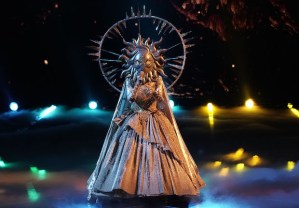 SUN | We’re finally at Sun’s performance, which was truly beautiful — she sang Billie Eilish’s “When the Party’s Over,” and the a capella part was especially gorgeous — but then Robinson said this, and I couldn’t stop puzzling out what the frilly heck he was talking about: “All my life, I felt the heat of the sun. I never heard the voice of the sun until now.” Uh, cool. Clues included: Mention of performing at dance competitions as a kid, breathing fire, a golden sun medallion and a connection to Nicole: “It’s great to see you on this big stage, because the last time we met was in the bathroom.” (My guess: Country singer LeAnn Rimes.)

THE UNMASKINGS | Jellyfish, Seahorse and Popcorn were chosen to go home. When they were unmasked: Jellyfish was Kim, Seahorse was Kelly and Popcorn was Dayne. (Go here to hear what they had to say about their time on the show!)