Talk about a saving Grace.

In Tuesday’s Big Sky, Jade Pettyjohn‘s character managed to MacGyver herself and her fellow kidnapping victims out of their restraints, slip through a gap in their storage container prison and evade the bad guys for quite some time… before taking two arrows in the leg and getting hauled back to start her nightmare anew. (Read a full recap here.)

After an episode like that, naturally we wanted to chat with Pettyjohn about everything Grace has gone through… and what’s ahead. Read on for what she had to say about the ABC drama’s next few installments.

TVLINE | So this is not the most important thing I want to talk about, but it was the thing that struck me the most when Grace was trying to get to the fisherman: Wow, that’s really pretty country that you shot in. Tell me about filming the outdoor sequences in this episode.
Yeah. This experience was beautiful. Like you say, it’s such an incredible location. When we originally shot, we shot in multiple locations in Vancouver up in the mountains of Squamish. When we first shot it, it was definitely very cold, and that was an interesting thing to explore because it was such a physically demanding piece, as you know. But because of certain location issues, we actually had to reshoot it about a week-and-a-half ago. But if you notice through the piece with the fishermen, there’s actually snow on the rocks and snow on the trees and things like that, which was wild. But it made it all the more urgent as far as the story goes.

The process was really fun to explore. A huge part of Grace’s story in this particular episode is telling those stories through the urgency of her physicality and movement and that urge or surge towards survival through every piece of movement. So it was a really exciting thing to take on. 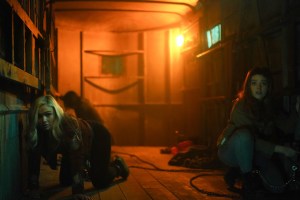 TVLINE | From the beginning, Grace is getting stuff done. She’s the one that knew what to do when the car broke down. She urged Danielle not to mess with Ronald in his truck. And in this episode, she’s the one who figures out how to get out of the shipping container. Do you think its reading too much into it to say that this is one of the first times in the sisters’ relationship where Grace is getting the chance to shine, for lack of a better term?
I definitely don’t think so, but you definitely touched upon my favorite thing about taking on this particular character. What I love most about Grace and how she’s written is that she’s never really absorbed by her fear. Fear, of course, is inevitable in a situation like this, but she’s never consumed or debilitated by it. She’s always using her mind. She’s always problem-solving, she thinks very analytically and she takes matters into her own hands. That ultimately is the one thing that she and her sister both have in terms of getting out, and that hope of potentially moving forward is Grace’s unwavering strength.

That was definitely something that was exciting to play. It’s a good story to tell, as far as a female survival story, that she’s not just sitting in her own fear.

TVLINE | She thinks so clearly in a situation that would put me into the fetal position. She figures out how to undo the restraints!
[Laughs] I did have to actually learn how to free myself from handcuffs with a shoelace. It’s kind of like a little sidenote, not as important. But it’s fun, the little things that you have to learn as an actor. And yeah, Grace definitely thinks analytically and she uses what she has in her environment to be set free. It poses the question of what we’re all really capable of. I don’t think we ever know what we’re truly capable of until we’re in that position. And Grace steps up to the plate, and you see her resiliency throughout the entire episode, through staying up all night trying to undo the locks and getting through and running through a sewage system and getting shot in the leg and then getting up and still trying to run away. There’s a lot of resiliency in Grace.

TVLINE | The girl got shot twice! And she kept running after the first arrow through her thigh!
Yeah. [Laughs] She’s relentless.

TVLINE | So wait, let’s back up for a second though: You legitimately know how to get out of handcuffs with a shoelace?
Yeah. I learned how to do it. The prop master gave me a set of ankle cuffs and a shoelace and showed me a YouTube video, and then I just practiced in my apartment until I got it. Yeah. It’s definitely very, very difficult, but now I’ve got a new little party trick. [Laughs]

TVLINE | Was that actually you getting carried by John Caroll Lynch? Were there doubles involved?
A lot of it was me being carried by John. I’m pretty sure you can tell through the show, but he is a very tall, strong man. He’s like 6’4″ or something like that. He’s big, he’s strong, so he definitely had no issue picking me up and throwing me around. All of that was very easy for him. [Laughs] I definitely felt like a sack of potatoes at a certain point.

TVLINE | In the next episode, Grace makes a very tough decision for the greater good. What can you tease about that?
It’s an intense episode, and it’s intense in a different way. Episode 3 is very action heavy. There’s a lot of stunts, as you know. It’s physically demanding. Episode 4 is a very emotionally demanding episode where you find all of the girls are at a crossroads. [They’re] trying to survive, and then a new set of circumstances comes in that might be a barrier for them to do so. 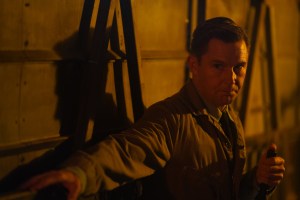 TVLINE | I was impressed by how feisty she was at the end of Episode 3, yelling at Ronald. But I’d imagine that energy can’t last forever, especially because now she’s hurt.
That’s really what’s explored in Episodes 4 and 5. I mean not giving any spoilers, but in Episode 3, she’s been shot through the leg with an arrow twice in the same leg, and she’s been running for miles. She’s not had any sleep. She’s eaten Spam and chips, and that’s about it. Her energy is depleted at this point, and in Episode 3 her rage is so strong and she’s so fueled by adrenaline that by the end she’s really a woman unhinged… and she fights back. But that’s what really is explored in the next two episodes, no one’s perfect or untouchable in that way, and Grace definitely takes a hit physically and emotionally, and she does navigate getting through that and still just coming to terms with the fact that she’s kidnapped and has a completely debilitated leg.